Dressed all in black, cradling his guitar like a beloved, Elliot Frank performs before a rapt audience. His agile fingers frolic over the strings, conjuring an exotic South American or Spanish composer’s tune. And for a moment of melodic fancy, he is Greenville’s Antonio Banderas, or perhaps the mustached Douglas Fairbanks’ Zorro, wielding his instrument instead of a sword. 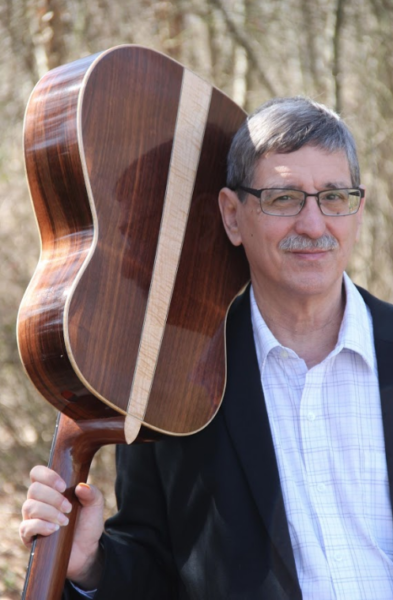 But that is the magic of the music. By day he can be found in more mainstream and academic pursuits at ECU, where he has been since 1988 when he began the Classical Guitar program for the School of Music.

Elliot Frank was born and raised further south, in Atlanta. It was there that he had the opportunity to perform for Jimmy Carter…when he was governor.

His earliest musical memory is hearing his mother play Chopin on the piano. But for someone with such cultured taste in music, it might be surprising to hear who he cites as his guitar inspirations: Jimi Hendrix and Duane Allman!

Still, classical was clearly his calling. “My first guitar teacher was a classical guitarist and while I was unsure about what he taught, I decided to give it a try and was hooked within a month.” he remembers.

It was not long after he began studying the guitar at the age of 19 that he knew music would be his life’s ambition. “I was something of a lost soul until I found the guitar,” he shares, a poignant reminder of the importance of music education on individuals and society.

And for many years, Elliot Frank has been sharing his passion for music with students. Donny Burbage of the folk metal band, Æther Realm, gave a shout-out to Frank in a recent interview for his influence in classical guitar studies. One of Frank’s recent students, Brandon Armstrong, is playing guitar in the Army, and another has a YouTube channel where he plays arrangements of themes from movies and video games, and he has 430,000 subscribers.

When Frank isn’t teaching, he’s performing. When asked to describe his style of  music, he said, “While my genre is called classical guitar, the range of the music I play runs from the Renaissance to pieces based on folk and popular music of various countries including Latin America and Spain.”

Favorite pieces to perform these days include his arrangement of Bach’s Chaconne for unaccompanied violin, and a set of pieces based on a cycle of poems titled “Platero and I” by Nobel prize winning Spanish poet Juan Ramon Jimenez. “Also, the South American composers Antonio Lauro and Agustin Barrios always show up on my programs,” he explains.

Frank’s performance credits abroad are as varied and exotic as his music, from the Mediterranean Guitar Festival in Italy to the Sea and Guitar Festival in Croatia. He holds a top prize in a number of international competitions, including the Concurso Internacional de la Casa de España in San Juan, Puerto Rico. He has enjoyed memorable performances in churches of Italy and Croatia, in venerable buildings dating as far back as the 9th Century AD.

Closer to home, he is a founding member of the North Carolina Guitar Quartet and performs regularly with them. He also directs the ECU Summer Guitar Festival and this would have been its 25th year.

The ongoing pandemic has driven instruction online, and like many other musicians, he has lost engagements, Frank explains. “I am learning new music and am revisiting older pieces. I bought a new instrument recently and am enjoying it very much.”

Looking ahead, Frank has performances scheduled in Anchorage and Sicily and hopes circumstances will permit them to go on. “Next summer will occur,” Frank says, referring to the ECU Summer Guitar Festival that fell victim to the pandemic this year, “virtually or in person.”

Frank has recorded a CD of South American Guitar Music on the ACA Digital Label, which is available commercially.

Several recordings are available on Youtube by searching Elliot Frank Guitar, including performances for Houston Public Radio, ECU, and a classical guitar series in Charlottesville.

From “lost soul” to guitar virtuoso, Elliot Frank is a living example to his students and the community that music education can be life-transforming, and matters.