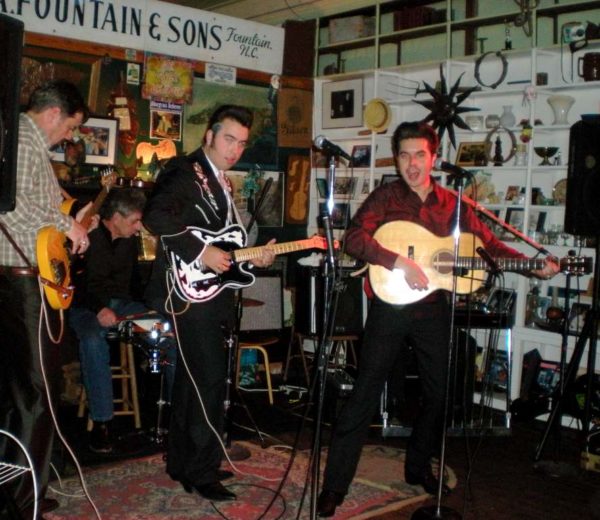 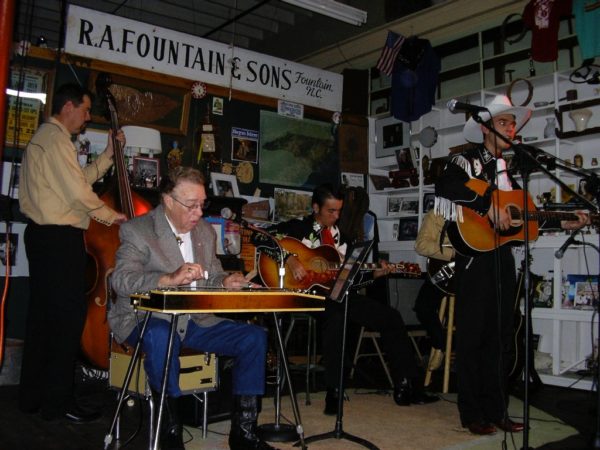 Don Helms & the Malpass Brothers with daddy Chris on bass

The Malpass Brothers formed as a 4-piece with Chris and Taylor Malpass joined by their dad, Christopher, and Clyde Mattocks–“just like the Louvin Brother’s setup,” Chris Malpass told Penny Parsons for a Bluegrass Unlimited profile, “mandolin, bass, acoustic guitar, and electric guitar.” 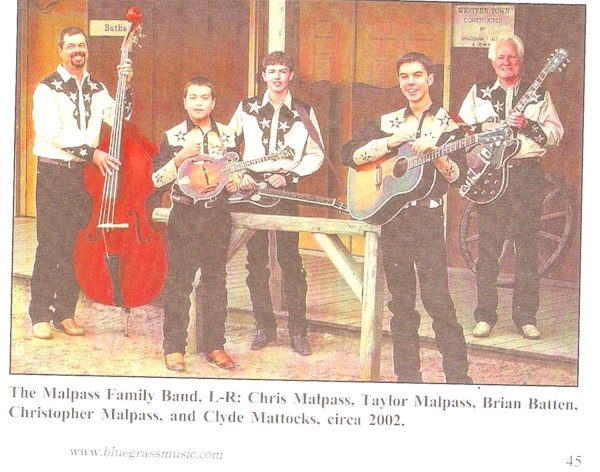 Their first big show outside East Carolina was in 2003 at MerleFest, and the next year they met Don Helms, the legendary pedal steel player with Hank Williams, who introduced them to an even wider audience in several dates he played with them, including three at RAF.
Their charmed story continued when they met Merle Haggard in 2007. He subsequently produced a CD for them and had them as part of his opening act for the last seven years of the Hag’s tours.
Their latest superstar producer has been Doyle Lawson, whom they met at the 2014 Ralph Stanley Festival. Lawson told Parsons: “I heard these guys playing country music with mandolin, you know, the Louvin Brothers. But what struck me was that the crowd just loved them. And my thought was that, probably, the most hard-core traditional bluegrass fans in the world go to Dr. Ralph’s event, and if these guys are that well-received, then there’s something to this.”

From our 2006 newsletter:
Don Helms & Chris Malpass Hank Williams Tribute Now Available
The much anticipated Hank Williams tribute CD by Chris Malpass and Don Helms, called Turn Back the Years, features new covers of 11 classic Williams songs. Helms, who played steel guitar on most of the original recordings, has been traveling with Malpass throughout the country, performing Hank Williams tributes in Louisiana, Alabama, Missouri, Tennessee, Illinois, Pennsylvania, and Canada.

Clyde Mattocks doesn’t think it will be long before Malpass is a fixture on the Nashville music scene, and few who have heard this amazing talent would argue. Mattocks, who often plays Dobro and banjo for the Malplass Family shows, plays bass on the new CD. He is joined by fiddle champion Tim Smith and Taylor Malpass on electric guitar. Kenny Dail plays steel guitar on one track, and Lisa Hill plays piano on another.

A poem inspired by a Malpass Brothers show at RAF with Don Helms:

“Gettin’ the Holy Ghost at R. A. Fountain”
by
Marty Silverthorne

Daddy’s dead but not tonight off Exit 63
at R.A. Fountain General Store reared
back in an old church pew. Stage lights
fall on empty mics, upright piano,
thumping bass. The steel picks up, rings
around the general store, in and out of
a nail keg, across worn frets of a ladder back.
The young crooner cries Waltz Across Texas,
Daddy dances in the Sea of Galilee,
Mama pats her foot and hums.
The tenor sets Acuff’s speckled bird flying.
Daddy can’t be held down by dirt,
runs the aisles in R. A. Fountain,
dances with axe, maul, handsaws.
It’s Mama’s music too; the young boy
pulls his hat off, slicks back black hair,
he’s Elvis turning a hymn into
a hunka, hunka heaven. Mama rises
from the pew, shouts “who are these
children bringing the dead out of the dark;
they must be Moses’ children
freeing us from our own Folsom.”

The spotlight falls on mics at rest,
after waltzing Luke the Drifter
over oiled hardwood. Daddy came
back from the drink box with a Coke,
Tom’s Peanuts, a cone of hand churned
chocolate ice cream for Mama.
He dropped peanuts down
the slender neck of the bottle,
baptizing them in dark syrup.
Mama savored chocolate from the cone.
If Mama’s heart had windows
you’d see a house of broken panes.
Daddy and Mama raise their hands
grasping a life line, a saint pulling
them into salvation as if they
saw the light and were lifted
on the wings of a snow white dove.