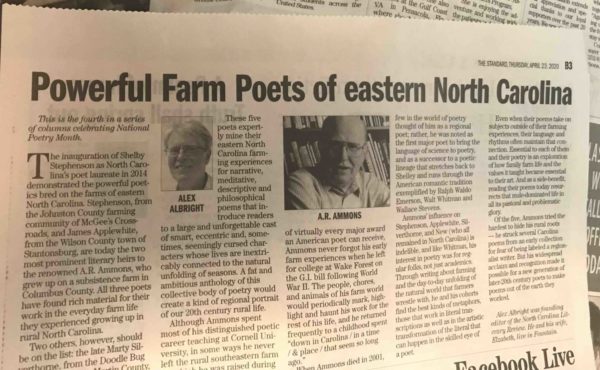 The inauguration of Shelby Stephenson as North Carolina’s poet laureate in 2014 demonstrated the powerful poetics bred on the farms of eastern North Carolina. Stephenson, from the Johnston County farming community of McGee’s Crossroads, and James Applewhite, from the Wilson County town of Stantonsburg, are today the two most prominent literary heirs to the renowned A. R. Ammons, who grew up on a subsistence farm in Columbus County. All three poets have found rich material for their work in the everyday farm life they experienced growing up in rural North Carolina.

Two others, however, should be on the list: the late Marty Silverthorne, from the Doodle Bug Hill community in Martin County, and Joan Cockerell New, from Nash County.

These five poets expertly mine their eastern North Carolina farming experiences for narrative, meditative, descriptive, and philosophical poems that introduce readers to a large and unforgettable cast of smart, eccentric and, sometimes, seemingly cursed characters whose lives are inextricably connected to the natural unfolding of seasons. A fat and ambitious anthology of this collective body of poetry would create a kind of regional portrait of our 20th century rural life.

Although Ammons spent most of his distinguished poetic career teaching at Cornell University, in some ways he never left the rural southeastern farm on which he was raised during the Depression. The winner of virtually every major award an American poet can receive, Ammons never forgot his early farm experiences when he left for college at Wake Forest on the G.I. bill  following World War II. The people, chores, and animals of his farm world would periodically mark, highlight and haunt his work for the rest of his life, and he returned frequently to a childhood spent “down in Carolina / in a time / & place / that seem so long ago.”

When Ammons died in 2001, few in the world of poetry thought of him as a regional poet; rather, he was noted as the first major poet to bring the language of science to poetry, and as a successor to a poetic lineage that stretches back to Shelley and runs through the American romantic tradition exemplified by Ralph Waldo Emerson, Walt Whitman, and Wallace Stevens.

Ammons’ influence on Stephenson, Applewhite, Silverthorne, and New (who all remained in North Carolina) is indelible, and like Whitman, his interest in poetry was for regular folks, not just academics. Through writing about farming and the day-to-day unfolding of the natural world that farmers wrestle with, he and his cohorts find the best kinds of metaphors, those that work in literal transcriptions as well as in the artistic transformation of the literal that can happen in the skilled eye of a poet.

Even when their poems take on subjects outside of their farming experiences, their language and rhythms often maintain that connection. Essential to each of them and their poetry is an exploration of how family farm life and the values it taught became essential to their art. And as a side-benefit, reading their poems today resurrects that mule-dominated life in all its pastoral and problematic glory.

Of the five, Ammons tried the hardest to hide his rural roots—he struck several Carolina poems from an early collection for fear of being labeled a regionalist writer. But his wide-spread acclaim and recognition made it possible for a new generation of later-20th century poets to make poems out of the earth they worked.