He Lived "in a world of unlikely possibilities”

Mike Hamer Lived “in a world of unlikely possibilities”

The Lemon Sisters and the Rutabaga Brothers. The Rhinoceroses with the Angelic Choir. The Cantankerous Casio Tour. Swamp Gypsies. Zen Revelators. If you never met Mike Hamer, a musician who is a local legend, just hearing some of the band names he was known for is enough to make you wish you had.

With no further context, he sounds clever and quirky, with a distinctive sense of humor. But man, is there more to his story. And though he shuffled off this mortal coil three years ago at age 69, his inspirational and colorful legacy lives on in the hearts of those who were fortunate enough to know him and in new fans who are yet discovering his music and writing. 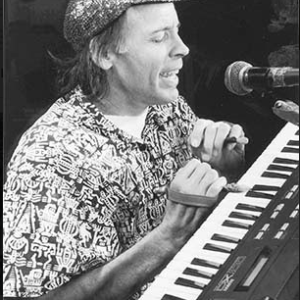 Calling him a “prolific songwriter” is quickly revealed as an understatement by visiting East Carolina University’s Joyner Library Special Collections. “He wrote a new song everyday,” fellow musician and friend Bob Aiken remembers. Hamer clearly had a strong sense of purpose…a creative spirit that would not be suppressed by circumstance. Reviewing the substantial collection of his composition book journals with lyrics and thoughts written in longhand feels a little like discovering a diary, but more like excavating buried treasure.

Although a diving accident left him a quadriplegic in 1985, his defining characteristic was not being wheelchair bound.

Hamer grew up in Catholic schools and studied for the priesthood before pursuing a degree in English. In a 2016 interview with Lipbone Redding, Hamer explains that his mother’s family was French Canadian. (This seeps into some of his musical stylings that hint of Zydeco.) He credits his Uncle Roland’s piano playing and a really good high school music teacher as significant music influences. He said he fell in love with folk music in high school, and probably wrote his first song when he was 18.

After college Hamer left his Vermont dairy farm stomping grounds where he “could see Canada from his family land,” according to his longtime friend, Bob Clyde. First he went to New Orleans and then in 1974, to Greenville, with the VISTA  [Volunteers in Service to America] project, a national program dedicated to ending poverty.

Retired ECU professor Alex Albright, who first knew Hamer as a musician, then friend and colleague, remembers, “Like Mike, I came to Greenville from New Orleans to take a temporary job and we both wound up staying in East Carolina for our respective forevers.” 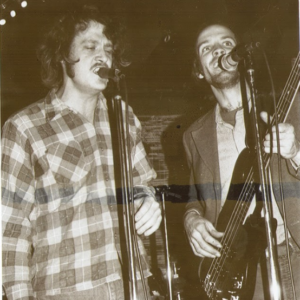 By this time Hamer had taught himself to play guitar and began performing with Tom Gillespie in the Tommy G Band. He learned to play bass, since Gillespie already played guitar. When Gillespie started thinking about taking the band on the road full time, Hamer said, “I don’t think I want to be a full-time musician.”

He spoke of being a farmer…that he liked to plant things in the ground in the spring and be there to see them grow. In the interview he celebrated the “weekend musicians,” those who worked another job all week, but gave it everything they had in their free time. It was then that he decided to pursue a master’s degree in English at ECU.

Bob Clyde was a Baptist campus minister at ECU, where he served for 35 years, when he met Hamer for the first time. “I was asked to help with orientation. Mike found out that a Baptist preacher was going to be leading that session. So he and a friend of his cut that session,” Clyde laughs. “He went up to me and said he cut my session because he wasn’t sure what a Baptist preacher was going to offer an old Vermont Catholic reprobate.”

And they became fast and long standing friends. “We sat on that little brick wall in front of the Methodist center on 5th Street after he cut my session,” Clyde remembers.

Drummer Bob Aiken (or “Shakin Aiken” as he is known) met Hamer in 1977 through the “thriving music scene that was prevalent in Greenville at that time.” He explains that he gravitated to Hamer for his “musical abilities, influences, and his good natured spirituality.” Aiken and Hamer played together in a number of musical collaborations.

Sue Luddeke remembers seeing Hamer for the first time in the early 70s when she was living at the Ficklen House on 5th street. “But it wasn’t until the Lemon Sisters and Rutabaga Brothers that we really became fixtures in each other’s lives,” she explains. 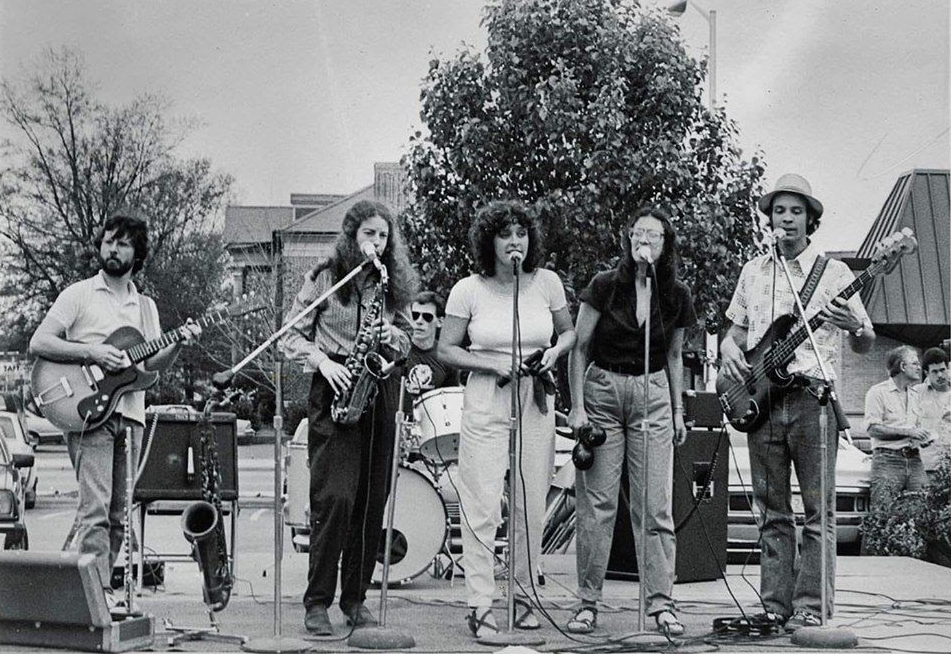 And that was in 1980, when Amy Hazzard, Laura Burkhead and Luddeke initially discussed forming a girl group. They immediately came up with the name “Lemon Sisters,” tongue-in-cheek, inspired by the Lennon Sisters of the Lawrence Welk Show. They realized they needed some additional music skill in the band, so Hazzard asked Hamer to play bass, John Worthington to play lead guitar, and Bob Aiken to play drums. “Mike came up with the name Rutabaga Brothers for the boys and we were a band,” Ludekke remembers.

Bob Clyde has vivid memories of the band. “As a Baptist preacher’s kid, we weren’t supposed to dance, growing up,” he said. “They played sort of 40’s dance music at the New Deli on Cotanche. They had a small dance floor in the middle of the place. I would be surprised if I ever missed a time that they played.”

“We were an eclectic mix that was fun, exciting, and danceable and the Greenville music scene loved us,” Luddeke remembers. “We played at the New Deli, the Attic, Jay Jays, Wrong Way Corrigan’s, music festivals, the Roxy, and other venues. We had the best audiences ever.”

“I was actually living next door to Mike in 1985 when he had his accident,” Luddeke remembers. “He had just returned from Witness for Peace in Nicaragua.” His cousin, Bob Gravelin, had come to visit and to go on an adventure together to celebrate Hamer’s safe return. “They went to Whichard’s Beach, where they wandered down a very long pier and Bob jumped in, but Mike dove in, thinking the water was much deeper than it was. Mike broke his neck and Bob literally lifted him out of the water because Mike had been immediately paralyzed.”

Hamer shared in an interview that the first thought he had upon awakening in the emergency room and discovering his paralysis was, “What instrument am I going to play now?”

“I remember riding my bike to the hospital every day and was always hoping for a miracle…but Mike immediately accepted the situation,” Luddeke says. “He even invited a bunch of us to come have a hat party photo op.  He was in a halo brace and he wanted to make a party of it to put everyone at ease…sometimes it can be hard for people to face the one hurt and he wanted, compassionately, to make it easier. I think that alone speaks volumes about who he was.”

Bill Redding, who played in an Irish band and the Zen Revelators with Hamer, said that before the accident, Hamer played guitar, bass, and drums. After the accident he taught himself the hammered dulcimer and rudimentary keyboards. “He was a prolific musician and songwriter,” Redding said. “Those who knew his music loved some of his songs which became cult favorites like ‘Mango Man’ and ‘Melinda.’ A particular favorite of mine is ‘Lucky Man.’”

Luddeke remembers that Hamer chose the hammered dulcimer for its beauty and because he could hold the hammers. “It greatly contributed to his continued interest in folk and ballad music.” For the keyboard he used a contraption of pencils and erasers to fit on his hands to play. “He fell in love with those little Casio keyboards and had a lot of fun on them,” she said. This, of course, led to the release of “The Cantankerous Casio Tour.” Later he added harmonica.

In the years after the accident, Hamer taught English and, occasionally, songwriting at ECU.  “He also taught songwriting on the side,” Bill Redding remembers, “and wheelchair dancing and English as a second language. He was very generous with his time. When he was periodically laid up because of a pressure ulcer or bone fracture, we would spend hours discussing songs, songwriting, singer/songwriters or books or articles we were reading.”

In the 1990s, he wrote the music for several musicals for young audiences, including Melvin the Pelican.

Many remember fun times with Hamer. He would have jams at his house once a month or so, sometimes with 5 or 6 people, sometimes with 20 or 30 people, Bill Redding remembers. “We would play all types of music, from Americana to Zydeco.”

Lightnin’ Wells, who performed in many groups with Hamer, remembers “Halloween shenanigans” with Hamer. Lipbone Redding talks about Hamer’s traditional Christmas card  photos including himself and “some beautiful ladies.”  “One year we did a tropical theme and about 5 of us piled into the bathtub.”

Hamer collaborated with many musicians, including Nathan Maxwell of the nu clear twins. “It was probably about ten years ago that he asked me if I would like to add some viola to some songs he was recording, ‘ Maxwell said. “I ended up also adding guitar, banjo, percussion, and a few harmony vocals to recordings which eventually became his album ‘Mike Hamer and the Cantankerous Casio Tour’.”

“I will never understand where Mike got his strength of sticktoitiveness,” Bob Aiken said. “I’m confident the daily obstacles, stressors, and boundaries would give us all pause to cave in and give up on the situation. But not Mike. From the first the day of his accident he turned on his light and embraced his challenges with dignity.”

Harvey Estes, who took Hamer’s songwriting class, said “I think remaining creative may have been the very thing that gave strength to his spirit. Whatever difficulties he faced, he had something interesting to do every day: Work on music. Write. Enjoy his friends. See how far you can push the envelope with a couple of wooden hammers and some metal strings stretched over a box.”

Jim Watson met Hamer in the early ’80s at ECU before the accident, when Hamer approached him, saying, “I think we are supposed to be friends.” Watson said, “Mike Hamer remains an inspiration to me and many others. His cheerfulness and desire to be of service to others, his focus on his craft, his love of life. I and many others carry Mike with us.” 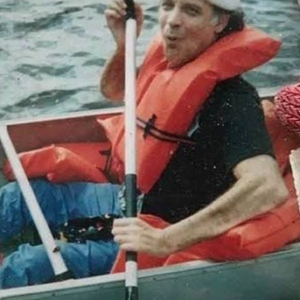 But maybe Hamer, who died on Dec. 10, 2017, with his long-time friend Amy Hazard by his side, gave us a hint of his source of strength, himself. Lipbone Redding spoke with Hamer about his thesis on Creation Spirituality, written before the accident, that acknowledged “some bad days, some good, some active creative moments and some transformational introspective moments.” He added, “I truly believe that, had his accident happened before this thesis, he would have struggled greatly. It was a moment of self-created fortune.”

“Whenever I hear good music that has feeling, that gets to my heart, a grin comes over my face,” Hamer writes in the conclusion of his thesis. He speaks about accepting life the way we find it. About living creatively. About “transforming our lives so that each day becomes an adventure.” About doing it “by letting go and embracing joy.” He concludes,“It is the leap of faith by feet that must continue to walk on this earth…. that we can walk with the right foot saying ‘glory’ and the left foot saying ‘Amen.’”

As his friend Bob Clyde says, “Mike Hamer lived in a world of unlikely possibilities…”

Mike Hamer made several collaborative recordings which are in circulation. Local videographer Jake Postma’s YouTube channel boasts a collection of Hamer performances, including a reunion dance with the Lemon Sisters and Rutabaga Brothers, and also performing solo and with other local musicians. Several of Hamer’s CDs are available at the R. A. Fountain General Store.