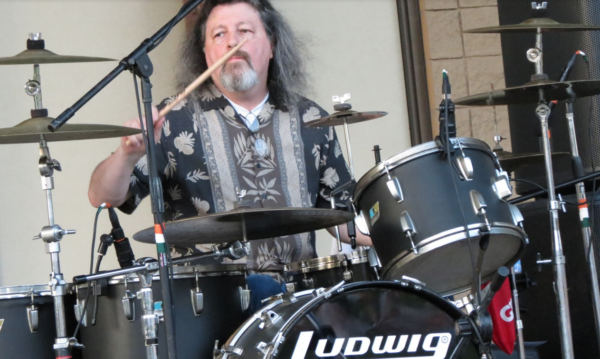 Joe Tronto marches to the beat of his own drum, providing the percussive heartbeat of local band, Built for Comfort. Greenville Sunday-in-the-Park fans got a taste of their music in 2018 when they took to the Town Common stage. The band cranked out American blues rock classics like “Too Tall to Mambo” and “Watch Yourself.” Lawn-chaired Greenvillians kicked back, enjoying sizzling tunes and simpler times. 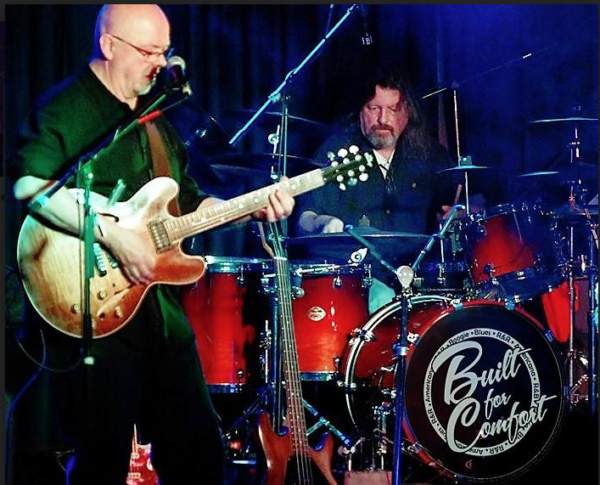 Tronto credits band-buddy Landy Spain for more or less tricking him into rediscovering his passion for percussion after a hiatus of 25 years. Like a lot of other colorful stories, apparently it all started at the Attic, on open mic night. “Landy was running the open mic for me and one night he told the drummer not to bring his drums and show up late,” Tronto remembers. “He knew I had my old drums in storage at The Attic and I would have to break them out and start as the house drummer to have a successful night. I caught the fever again.” That was 20 years ago.

And while they jammed a lot through the years, Built for Comfort didn’t officially start until about 2013 when they began performing regularly. The band includes Fountain resident Landy Spain on guitar and vocals, Bill Hunneke from Simpson on harmonica and vocals, and Greenville resident Al Carrol on bass guitar and vocals.

“I had a sound company from 2006 to 2013,” Tronto explains. “When I sold the equipment is when I had weekends off again so Landy and I decided to get serious about the band.”

Tronto describes the style of music the band plays as “blues rock…a very roots feel with a lot of shuffle and swing…great for dancing.” And it’s the blues that inspired the band name. “It is an old blues song that Willie Dixon wrote,” Tronto explains. “We were working on our own arrangement of the song when I suggested it as our name after several others were rejected.  We still play our arrangement to this day.”

Even though he hadn’t played in a good while until Spain played his Attic trick, Tronto got an early start. “In my teenage years in New York I convinced my parents to buy me a $90 set of drums,” he remembers, “We had a home with a finished basement at the time so it wasn’t as loud to them when learning my craft.  I am pretty much self-taught by playing along with records in that basement.”

So how did he start out in New York and end up in Greenville? Unicorn Club members take note…his father (also named Joe) worked for Burroughs Wellcome Co.  His family moved from New York in 1970 when the pharmaceutical company relocated.

Tronto explains that he started in the bar business in college, working at the Rathskeller on 5th Street in downtown Greenville. “After I graduated from ECU I tried the shirt and tie 9-5 job and did not enjoy it. Left ‘the Rat’ around 1979 to become a manager for the Attic.”

In 1990, Tronto became owner of the Attic. “I’m very proud of the level of entertainment the Attic brought to eastern NC for 30 years, from 1971 to 2001,” he said. “ Don’t forget that from 1986 to 2001 we were a standup comedy club every Wednesday night. What a blast those years were!  They say you won’t work a single day in your life if you do something you enjoy. After all, it is the difference between a job and a career.”

When it comes to performance, Tronto says, “I love the big stage festival shows.” Farmville Dogwood Festival, Greenville Sunday in the Park, Morehead City Summer Concert Series, and Freeboot Friday are some of his favorites. “Probably our first Sunday in the Park in front of a thousand or so people stands out.  I still love the intimacy of a club date too.”

These days one of his favorite songs to perform is by Robin Ford,”Tired of Talkin’.”  Tronto describes it simply as a “great tune, great arrangement, and feel.”

With Tronto’s rich background as both a performer and club owner, he has seen a lot of musicians come and go and offers valuable advice: “The ones with a passion for it are a step ahead of everyone else so I advise young players who really love what they are doing to stick with it. You don’t have to have a recording contract or become a star to be successful. Music is a gift that keeps on giving to both the musician and audience.”