When John Bradley flatpicks his guitar, belting out “Will the Circle Be Unbroken” with local jammers, you’d declare he must be a good ol’ country boy. And you wouldn’t be wrong. He’s a true southern gentleman. From Michigan.

He has “preacher hair,” always neatly in place, and it tops off his usual ensemble while playing: a t-shirt emblazoned with his custom guitar brand name,“Redneck Guitars,” khakis, and either red tennis shoes, or shoes with red laces.

“It was a culture shock,” he says about relocating from Portland Michigan to Greenville in 1981. But he laughs and says he learned pretty quickly, “If you’re a guitar player, they’ll excuse you for being a Yankee.”

Bradley was working at a TRW plant in Portland Michigan when the company started opening plants in the south. “They sent me down here temporarily and I figured I’d be here a couple of years, get promoted, and either move back or go somewhere else.”

But since that was nearly 40 years ago, Greenville must have grown on him. 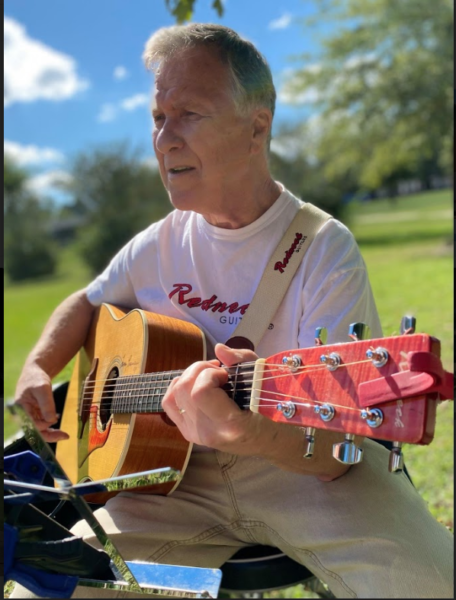 It didn’t take him long to find kindred spirits. Bradley explains that he and his colleagues were working long hours to get the plant started. In order to wind down after a long day, sometimes they’d go to “a little honky tonk place on Pactolus highway,” Player’s Retreat, as it was close to TRW.  “One of my friends that I still play music with, Danny Wiens, was the first guy I met there. He could flatpick all those Norman Blake songs, and I went, ‘Wow, I just got a new friend here who knows his stuff!’”

It was Norman Blake music that hooked him early on. Bradley was living in east Lansing, Michigan in the ’70s where there were a lot of college town artists playing small venues, he remembers. He hung out in a music shop, Elderly Instruments. He said he always liked the flatpickers Doc Watson and Tony Rice, but hearing Norman Blake play up close in that basement music store made him sign up for lessons.“I got hooked on fiddle tunes.”

In describing his favorite style of music to play, he says,“the easy answer would be anything that can be played on acoustic instruments in the roots Americana bluegrass style.”

Bradley is the bass player in a trio called Harmony Grits that meets on Sundays and includes guys he’s played with for 40 years in various bands, brothers Danny and John Wiens. He also plays guitar with the St. James Jammers and a Jammers subgroup with Jim Joseph, Leslie Bowman, and Mamie Dixon, the Back Porch Players.

Bradley has made a name for himself over the past several years as a luthier, building his own signature brand of instruments: Redneck Guitars. And it’s literal; the neck of each guitar is red, to reinforce the brand. Sometimes when he walks into a rehearsal, his friends will say, “Here comes two Rednecks!” meaning of course, the instrument and the man.

“The guitar building dream began to incubate after building a guitar from a Martin kit in the early 90s,” he remembers, adding “it’s still being played.” He explains that he did repairs for 10 years, gaining skills. Then word came that the TRW plant where he worked was closing. “I was  young…56 years old when the plant closed, and I decided, well, rather than look for another factory job I would just take up this building thing.” Bradley credits his daughters with talking his wife into letting him “chase the dream.”

His neighbor and mentor, JD Adams, whom Bradley describes as “a retired banker easily mistaken for an engineer,” helped him with assembly fixtures and processes. 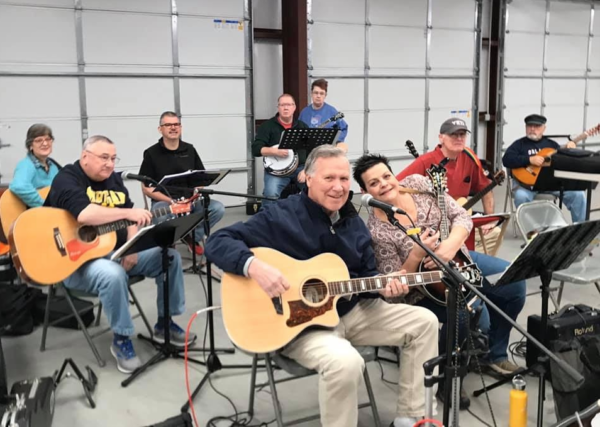 “It’s been a nice retirement. I sort of traded the big factory for my own little personal factory,” Bradley says. “It’s been a fun ride…and I can’t wait to get out there and get some quality shop time.”

“I like the sound of mandolins but they’re too dang little and their tuning is upside down to a guitar,” a customer of his explained. “So I took a guitar to him and said, ‘I want you to make a giant mandolin out of this for me. You’ll have to change it from 6 strings to 8 of course, and if you could tune it like a guitar, that would be nice.’ A few weeks later I had an instrument that was just like a mandolin, except for one thing: I could play it.”

One of Bradley’s favorite restoration stories involved bringing new life to a guitar from the 1890s that belonged to Fannie Linton, his neighbor’s grandmother. Linton was from the mountains of Virginia, close to the Carter Family fold. Earlier this year Bradley was able to place the carefully refurbished guitar in the hands of Fannie Linton’s great-great-granddaughter, Olivia.

But even though John Bradley is known for being a talented musician, engineer, and craftsman, to his credit, he is best known for his magnanimous spirit. “John is a kind and generous musician,” a fellow jammer said. “He encourages those who are less skilled than he is (that would be most of us) and is patient with us. He will give up a song that he was going to lead if it will give someone else an opportunity to shine. He embodies the idea and practice that we are a community of musicians that help each other.”

Bradley also maintains a Redneck Youtube channel featuring his music and many of the gifted musicians who have visited his shop.