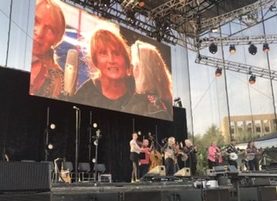 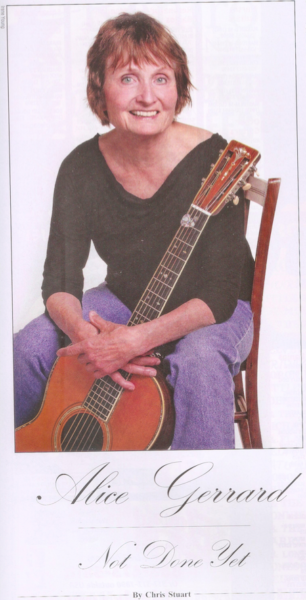 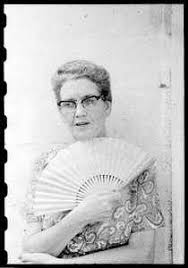 Alice Gerrard‘s several performances at RAF have all been charming and fun, the kinds of events where you don’t want to see an ending, and meanwhile, you know you’re experiencing something rare and precious.
Now in her mid-80s, Gerrard has been for many decades one of the leading voices in traditional, old-time and bluegrass music. Her legacy includes not just her important recordings and performances but also her founding, in 1987, of the Old-Time Herald, which she also edited from its beginning until 2003.
Gerrard was born in Seattle in 1934; her father died in 1942, and her mother, a brother, she moved in with an Oakland relative, where she grew up hearing, for the most part, classical and popular music of the times. Her musical interests and life’s direction changed after she enrolled at Antioch College, where she met Jeremy Foster, and she soon became aware that women singing this stye of music had voices that resonated with her. On a 78 rpm recording she checked out of the college library, she told Christ Stuart in 2014, she discovered Texas Gladden, who was “singing this unaccompanied song, ‘One Morning in May.’ It was an amazing song, a woman’s version of ‘Streets of Laredo.'”
Foster introduced her to Hazel Dickens, whose voice “had the same quality as Texas Gladden. . . a different sounding voice, but it still had that high, keening sound.” She admits listening to Dickens for “a long time before singing with her–I was really trying to absorb that sound.”
She and Foster married in 1956 and moved to Washington, DC, where they joined regular pickin’ parties that included Hazel Dickens, Mike Seeger, Pete Kuykendall, Dick Spottswood, Ralph Rinzler, and others. Back in Ohio, they produced a concert by the Osborne Brothers at Antioch College, the first bluegrass concert at a college or university.
Back in DC, she and Foster re-entered what she called “a rarified atmosphere that I came of age in, musically.” 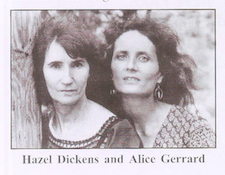 She and Dickens were big hits at the Galax Fiddler’s Convention in 1962 and soon after they began recording together, Foster was killed in a car accident; Gerrard was left with 4small children to raise.
Gerrard told Stuart: “I don’t think I’ve ever felt like performing was a career. Music, yes, but that has always involved peripheral music stuff like advocating, collecting, documenting, the Old-Time Herald, etc. And I don’t think I ever made a conscious decision at any point that this was what I was going to do as a career. It just kind of happened that way. I dropped out of college, got married, had kids, and was lucky that I could do music stuff that I loved.”
The music world, especially that of old-time and bluegrass, has also been lucky for this love.
And RAF is fortunate that Dan Schram recorded some of a Gerrard performance with the Piedmont Melody Makers for Indy Weekly: Watch it.
The 2020 documentary about Alice Gerrard, You Gave Me a Song, is no longer available to stream for free via PBS and Reel South, but you can watch a clip.

Gerrard has been honored with an International Bluegrass Music Association (IBMA) Distinguished Achievement Award, a Virginia Arts Commission Award, the North Carolina Folklore Society’s Tommy Jarrell Award and its Brown-Hudson for her life-time contributions to traditional music, and an Indy Award. She was inducted into the Blue Ridge Music Hall of Fame in 2016 and she and Hazel Dickens were inducted into the Bluegrass Hall of Fame in 2017. They made two albums together for Folkways Records.
Her first three solo albums, Pieces of My Heart (1995), Calling Me Home (2004), and Bittersweet (2013), were produced by Laurie Lewis. Her fourth, Follow the Music, produced by Mike Taylor of Hiss Golden Messenger, was nominated for a 2015 Grammy in the Best Folk Album category. 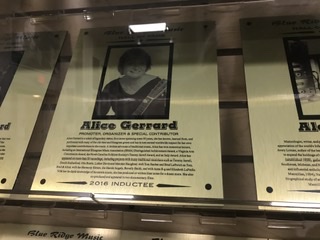