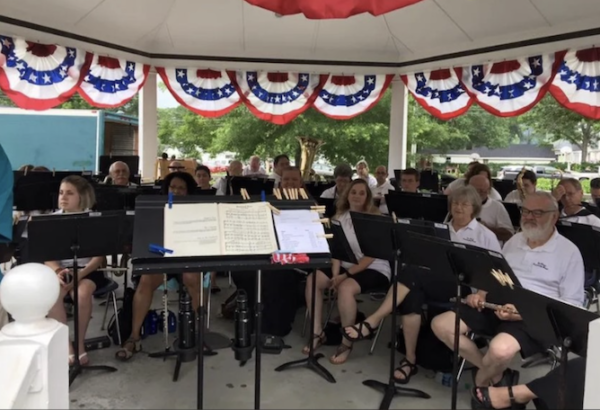 The sound of patriotism strikes an emotional chord

Somewhere between “Gotta Get Her Out of Me Blues” and “Mr. Bojangles” on the set list, the St. James Jammers break out into a rousing “America the Beautiful,” with Alise Rowan leading. Ten or eleven casual musicians are assembled before a receptive audience at Cypress Glen on the first Monday night in May, like usual. But the response is anything but ordinary. The familiar song played with bluegrassesque strumming fervor comes across as more happy-feet than majestic. But even so, one by one, audience members begin to stand. As the words to the second verse begin, “O beautiful for heroes proved in liberating strife / Who more than self their country loved, and mercy more than life,” a resident in the center pushes up from his wheelchair, wavering and careening, clearly unstable, causing those nearby to rush to his aid. He really isn’t able to stand, but it becomes apparent that he is not going to let reality interfere with the dictates of his heart. So surrounded by friends, each providing both moral and physical support, he stands until the song finishes in a flourish of “sea to shining sea!” The air is filled with such an emotional charge of loyal allegiance, the jammers find it difficult to keep playing. 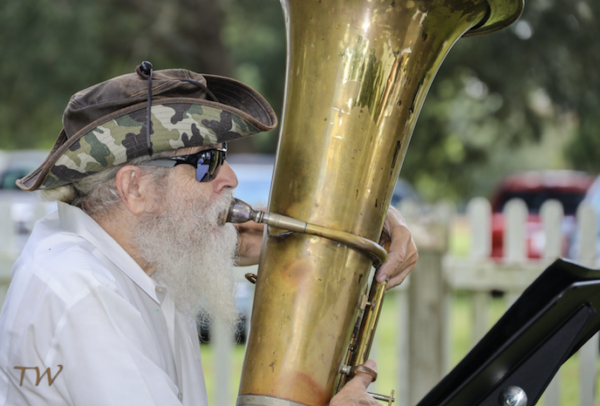 Michael Kinzie, who plays with Tar River Community Band (TRCB), Pitt Community College Symphony, and other ensembles,  remembers a time when he played tuba for the Marching Pirates. “This was during the Vietnam War and America was very divided. We took the field and played a number of patriotic songs such as ‘America the Beautiful,’ and ‘Proud to be an American.’  The announcer was delivering a monologue which climaxed as we played ‘The Star Spangled Banner.’  When the herald trumpets hit an incredibly high note at the end, the roar of the crowd was deafening and everyone in the stadium was on their feet.”

Alice Keene, who plays saxophone with TRCB,  which has a rich repertoire of patriotic music, understands the sentiment: “In our fast paced lives, I think we sometimes forget the price many have paid for the gifts of freedom we all treasure each day. I believe music has the power to touch us in ways that remind us how truly fortunate we are to be Americans. I love playing patriotic music with the TRCB. For me it invokes feelings of pride and sincere gratitude for service members over the years, as well as this beautiful land we call home.”

The TRCB held a concert in March that commemorated the 77th anniversary of the end of World War II. 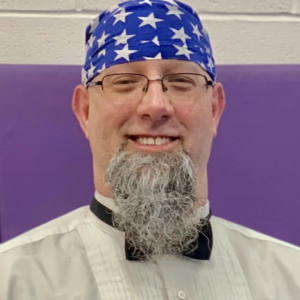 James Mauser said, “As the director of the Tar River Community Band, it is my job to put together musical programs for various patriotic events throughout the year. I feel that we should honor all those that have served in our military, regardless of how long ago it may have been. We need to pay particular tribute to those that have given their lives in the defense of our nation. As a musician, I take great pride in being able to put together programs that honor our veterans, and active members.”

Mauser shared some of his favorites from the patriotic music the group performs. One is “Reflections From the Wall,” by David Shaffer. “This piece pays tribute to the veterans from the Vietnam War.  Each fall we perform for ‘Salute!’, a Veteran’s Day celebration that is hosted by several Vietnam vets.  It is a great honor to perform a piece that is essentially written for these heroes.”

Another crowd pleaser and a “crash course in music and American History” is “American Spectacular,” by Chris Sharp. “This is a medley of various patriotic pieces that span the course of American History,” Mauser said.

A piece that pays homage to the sinking of the USS Dorchester during WWII is “The Light Eternal,” by James Swearingen. “It specifically recognizes the four Army Chaplains,: he said, “who sacrificed their lives in order to save as many people as possible.”

But the song that both Keene and Mauser claim as their favorite is “The Armed Forces Salute.” The piece presents the themes of all 5 branches of the U.S. military. “Every time we perform it, we invite any veteran in the audience (and band) to stand during the theme from the branch they served in,” Mauser said.

Keene finds it creates “a direct connection between the band and the audience” that she believes touches everyone present.

And who can forget the heart thumping, piccolo piercing, “Stars and Stripes Forever”? The TRCB concludes every concert with Sousa’s best known march…the National March.

“The Spirit of Patriotism is a core value for the Tar River Community Band,” Keene said. “It’s exemplified by the fact that we begin each concert with the Star Spangled Banner and end with Stars and Stripes Forever.”

“It truly is a great feeling when we present a piece for our honored veterans, and it hits home,” Mauser said. “As long as I am the director of the community band, we will always do our part to honor our heroes!”

Originally published by the Daily Reflector May 28, 2022. 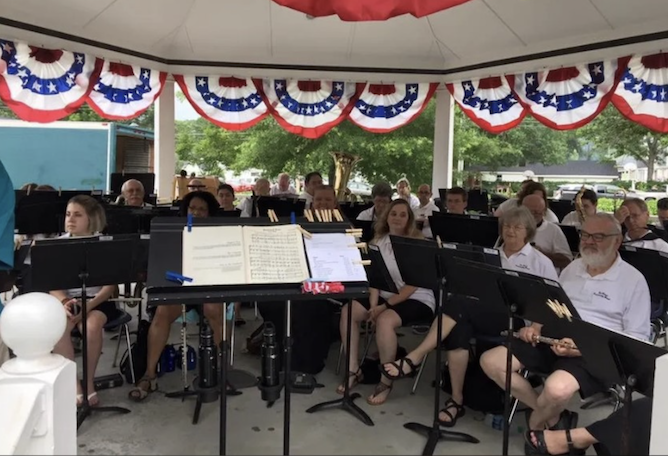