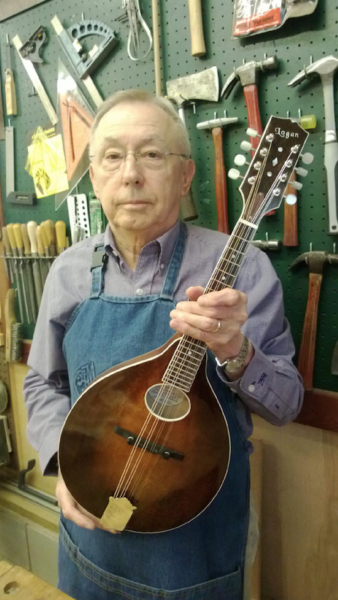 “I met a mandolin player today,” one of the jammers said nonchalantly at practice while taking out his guitar.

Local musicians are a lot like runners and motorcycle riders. They feel like they’re part of a secret club and they expect to already know everyone else in it. So meeting a new one is sort of a big deal.

They bumped into each other in the same neighborhood. You have to wonder if they gave each other the “special wave” reserved for the inner circle.

But when he said the mandolinist’s name, Gerald McGowan, it was already familiar. John Morrow had been talking about him too. “You should talk to Gerald McGowan. He plays mostly mandolin but has built around 13 along with a couple of guitars. He is currently restoring a beautiful Martin guitar that was in a terrible accident,” Morrow said.

Turns out, he’s not exactly the new kid on the block. He grew up in Pitt County, spent most of his adult years in New Bern, then moved back here to be closer to family. 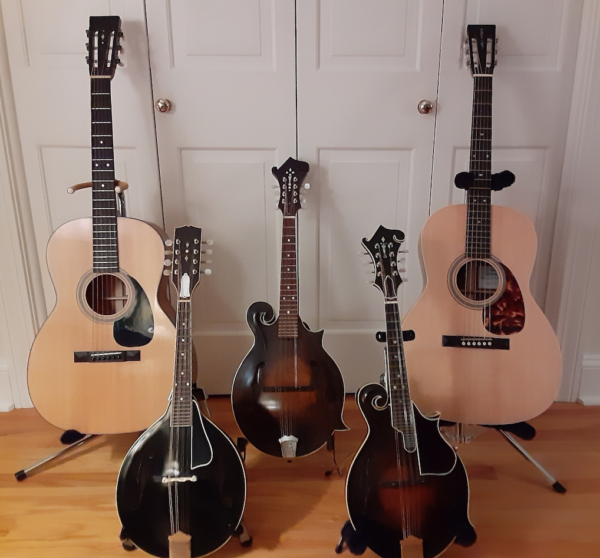 “I enjoy all stringed instruments but the mandolin and the guitar are my main instruments,” McGowan said. “I have played the guitar since childhood but in the last 20 years, I have played mandolin more. Maybe because every group seems to have good guitar players but sometimes need a mandolin player.”

His first foray into music was on the piano, taking lessons as a child. “I was not very successful because I really wanted to play the guitar,” he said. “My uncle, John Hart, was a guitar player and I would often hear him play when we visited his home on Sunday afternoons.”

Eventually, his mother gave up on the piano lessons and his Uncle John taught him some basic guitar chords. “Using my savings, I went to Greenville Loan and Jewelers and bought a Stella Guitar for $12,” he said. “Uncle John continued to tutor me on Sunday afternoon visits until I could play along with him.”

He’d listen to country music on the radio and watch programs like the Grand Ole Opry on TV. The Carter Family was one of his favorites and he’d try to play their music. “The Wildwood Flower became my go-to song to play and is still one of my favorites. My style of guitar playing was patterned after Mother Maybelle.”

The local TV station had a show called the Carolina Partners on Saturday nights in the 50s and he would watch and try to learn the songs. “As a teenager, I became interested in the folk music that was popular then. Peter, Paul and Mary’s “Blowing in the Wind” was one that I played often,” he said.

He always loved bluegrass but seldom had the opportunity to play it, since most of his musician friends played country. But that changed in 1989. “A young banjo player named Fred Bisel came to New Bern and began teaching string music classes at Craven Community College where I worked as dean of industrial technologies,” McGowan said.

Bisel was not only an accomplished musician but a promoter of traditional music. “He organized a band called Moe and the Grass, made up of some of the best musicians in eastern North Carolina,” McGowan said.

After returning to Greenville in 2006, he met several good musicians who became friends, and they would meet at least once a week, often in a back room at the Daily Reflector. Mark Rutledge, a former editor at the paper, said McGowan joined an informal bluegrass band started by executive editor Al Clark and Rutledge: “We called ourselves the ‘Morgue Sessions’ because we practiced on Wednesday nights in the morgue, where newspapers store back editions. The band also included then Pitt County Health Department Director John Morrow, surgeon Brad Brechtelsbauer and retired ECU psychology professor Will Ball.”

The group also enjoyed playing several shows, McGowan said, “but, alas, all good things have to end ….” Most of the band members moved away; Morrow and McGowan continued to play in church and at home until the pandemic, he said.

Rutledge remembered meeting the mandolin player through McGowan’s wife, Thelma, after he mentioned “The Morgue Sessions” during a speaking engagement. “My husband plays mandolin,” he remembers her saying, “and he’s pretty good.”

Rutledge thought so, too: “Whenever we get to talk, Gerald and I always agree that of all the band experiences we’ve had, the morgue sessions are the best. It was one of those magical groupings like-minded musicians that never seem to last long enough.”

When Rutledge invited Will Ball to play with the group, telling him about McGowan, Ball asked, “Is he a little blonde-headed fellow?” Rutledge told him at one time he might have been. “Turns out Gerald was in Will’s woodworking class at ECU 50 years before. They had not seen each other since.”

After retirement McGowan built upon his enjoyment of woodworking and began the instrument building and repair work that John Morrow talked about. Building a dulcimer first, he moved on to mandolins and guitars. Though he considers it a hobby, he calls it “very satisfying work.”

Playing music, for McGowan, is a way to relax and leave the stresses of life behind. He confessed, “This is when I do my best thinking and problem-solving.” 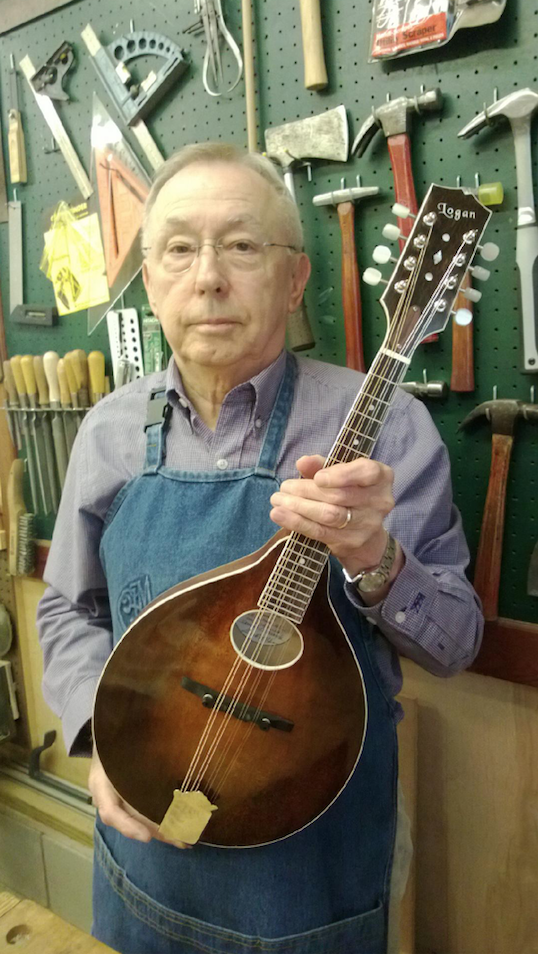