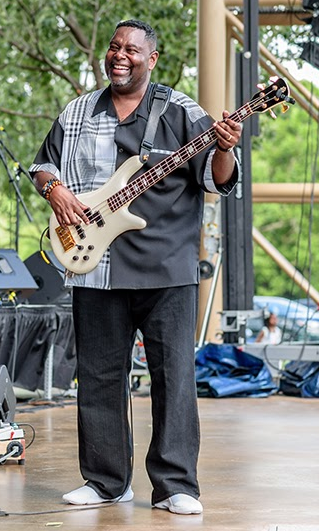 The camera pans across the grassy expanse of the Town Common, the sun glowing orange as it dips below the trees on the horizon. Lawn chairs are clustered together with no regard for social distancing…because who had heard of such a thing just last summer? On stage Carroll Dashiell, “CVD” or “Dr. D” as some like to call him, is wielding a white, electric bass guitar, and beaming. He is in his element, surrounded by other jazz musicians…a saxophonist, drummer, guitarist and keyboard player. The City of Greenville videos of past concerts remind us of a more carefree time.

This year would have marked the 7th annual Carroll Dashiell Greenville Grooves Music Festival. But as the marquee on the State Theater reminds us, Greenville will groove on.

The festival was formed in 2014 when Merrill Flood, assistant city manager then, approached ECU associate professor of  music and director of jazz studies Carroll Dashiell with the idea of having a concert in a festival atmosphere to celebrate African American Heritage Month. “I humbly accepted and feel that it is an honor and a privilege to be thought of in this way,” Dashiell shares.

When he realized this year’s festival, originally scheduled for June 20, would have to be cancelled due to the COVID-19 outbreak, he was disappointed but said he understood the magnitude of making certain everyone’s safety is of the highest priority. “We planned the Carroll Dashiell R&B Classics and Jazz Review for this year and hope to reschedule next year with special guest artists’ schedules permitting.”

He has been in contact with musicians from varying genres all around the United States and other countries around the world. “We are all in the same boat. No gigs…anywhere.” But the situation has given them time to reflect, “to seriously get back into the ‘wood-shed’ and be inventive and creative in other ways.”

Dashiell has been writing original music, scoring and arranging music for upcoming recordings and projects, and performing on virtual concerts, presentations and church services.

But despite obstacles, he’ll always find a way to make music: it’s part of his legacy. He grew up in a musical household, where music was always on the radio. Where he’d wake up to classical music in the morning, listen to Earth Wind and Fire in the afternoon, listen to gospel around dinner time and go to bed in the evening listening to jazz. Interspersed between all of that would be country, rap, and music of different cultures. “My mom was a classical vocalist, my dad was gospel vocalist and leader of a male vocal quintet and my grandmother sang alto in three choirs, and was one of the church organists/pianists at my church.” 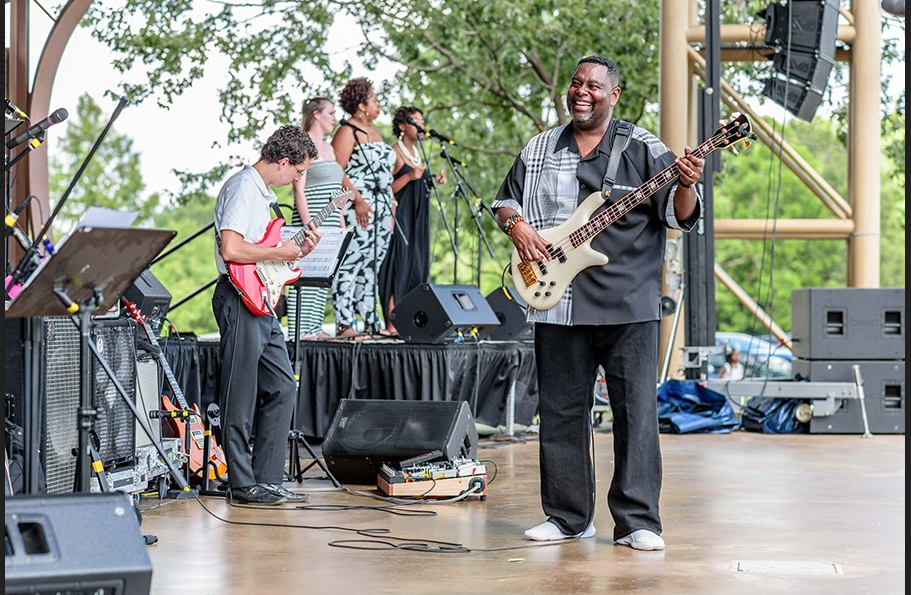 And the musical legacy lives on in his own household. His wife, Rhonda, was a classical vocalist and they worked together on commercials he produced. They were both music majors at the arts high school coming up in Washington DC. They have four children, Cameron, Carroll the 3rd-(CV), Christie and Christian. “They are all incredible musicians and inspire me each and every day. Plus, they are now musically kicking my butt.” he laughs.

Ironically his love for his primary instrument, the string bass, was reinforced by the failure of another kind of string. He began playing the viola and violin in the second grade. But in the fifth grade, he was playing the string bass, while also playing football, baseball, and basketball at the same time. “I pulled a hamstring in football practice one late afternoon but I was a featured soloist with an orchestra the same evening. I couldn’t miss the ‘gig’ but the hammy was killing me. Music won that game.”

These days his primary instruments are string bass and electric bass, but he loves playing piano and keys…and even drums. He tries to be as versatile a musician as possible and says he enjoys all types and styles of music: “My playlists include everything you can imagine; Boston Symphony to Duke Ellington to Bruno Mars to H.E.R. to Snoop Dog to Richard Smallwood to Garth Brooks.”

Over the course of his career he has traveled the world and worked with too many talented artists to name, including the likes of [Greenville native]Dr. Billy Taylor and “the genius, Mr. Ray Charles.”

But his favorite song to perform hits close to home. “Love Prevailed” is the song he wrote for his wife and premiered at their wedding. And perhaps those two words are the best epitaph for 2020. “I know we will get through this challenge of the pandemic,” he shares from his heart, “However, I pray and hope that we will come back even stronger.”