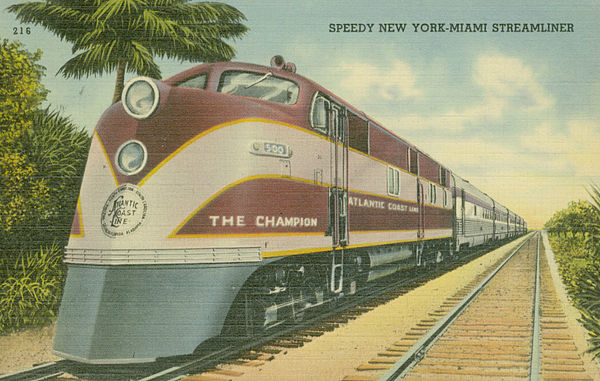 Trains of Old: the Champ

an excursion to Rocky Mount

Trains of Old: the Champ

It is sometimes difficult to know how and where to start a story. In this case the subject might be trains, or it could just as well be ancestors. For this story, the location is Rocky Mount, North Carolina. Many years before there was a city of this name, my ancestors settled on Compass Creek, obtaining a 100-acre state land grant which is now in the northern section of that city.

Robert Dempsey Trevathan was my great-great-grandfather and the relative in question. History tells me that Robert was given the contract to build a portion of the Weldon to Wilmington railroad, at that time the longest railroad in the world. He at least supplied the mules and “rented” two slaves from his brother for the job, so the story goes.

Over 900 men built the tracks, completed in 1840. The story is that since his farm was so close to the train tracks it upset his mules, so he sold his farm to purchase land some distance from the new town. If he had been smart, he could have owned land in what is now the city of Rocky Mount.

In my youth, Rocky Mount was known at the “Train City.” Atlantic Coast Line had double tracks running from D.C. to Florida, through the largest city in our area and where my parents preferred to shop. The clerks in Rosenbloom-Levy and Epstein’s Men’s Wear knew my parents by first names. For me, the thrill of going to Rocky Mount was not to shop or visit relatives, but, rather, to experience the excitement of the passing passenger trains. There was nothing quite like it.

I usually found a place to sit near the train station. Before long I could hear the whistle faintly in the distance. My heart raced with anticipation. Soon I saw that majestic silver bullet barreling down on the city. What a sight. The exhaust streaming from the engine, the flapping of red pendants mounted on the cattle catcher, and the blast of the whistle were like magic.

The engineer, with his stripped cap and red bandana, held his hands tightly on the console. The name was plastered across the front of the engine, THE CHAMPION. Before I could take it all in, the Pullman cars passed by with passengers sitting at tables with tablecloths, silver pitchers, cloth napkins, and formally dressed porters waiting on tables.

The name of the train seemed a perfect fit for this beautiful monster. It was a few years later that I learned the train was named for the CEO of the Atlantic Coast Line Railroad, Champion Davis, a native of Wilmington, NC. He shortened his name and was known by all as “Champ” Davis. A name fit for a train.