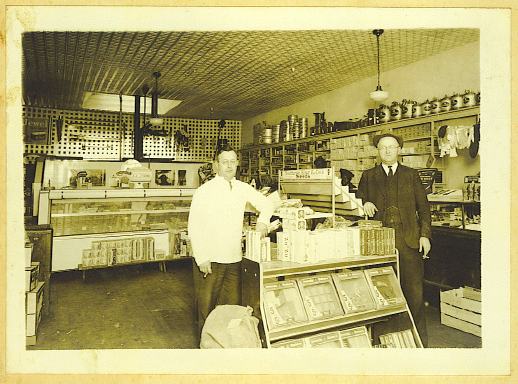 Founded in 1936 by Jesse Leonard Peele and Alton Moore and operated under the name Peele & Moore, J.L. Peele Store (later Peele’s Supply Store) was in continuous operation until 1985. After one year of partnership, Peele bought out Moore.

Serving as a grocery and general store, clothing including shoes and work clothes were sold in addition to groceries and other food items. Freshly cut meats were a popular item from the meat department; freshly made sausage was stuffed on site. In the early days, chickens were kept out back and were sold live. During World War II when no other meats were available, J.L. killed hogs and cows on the family farms at night and sold them the next day at the store.

Coal was sold by the bag from a bin out the back door. Farm items including salt blocks were also available. Dried beans, corn, and sugar were shipped in large bags and was scooped into five and ten pound bags for resale. In the late 1950’s paint colors were mixed from prescribed formulas. A wide selection of hardware and farm supplies were stocked.

Cold drinks were available along with freshly sliced chunks of cheese from the cheese box — a great complement to the large round cookies sold from the Jack’s cookie containers.

J.L.’s sons Scott and Bob worked in the store before and after school hours and on Saturdays. Deliveries were made to local homes by the boys on bicycle. J. L.’s youngest son, Warren, helped out on the family farms. When World War II began and Scott and Bob served in the Navy and Army Air Corps, respectively, Emma Dozier, J.L. Peele’s sister-in-law, came to work in the store and remained until its close in 1985.

In 1952, Bob opened Peele’s Radio Service (later Peele’s Radio & TV Service) and operated from the second floor of the store. The daily business of the store and farm operations were overseen in the offices located in the back of the store. With the sudden death of J.L. in 1965, Scott and Bob continued operating the business under the name Peele’s Supply Store.

In 1985 Bob Peele died suddenly and the business was closed after 49 years.

The building was originally built in the early 1920’s by R.A. Fountain for his brother-in-law, W.L. “Bill” Goodwyn, who also operated a store.