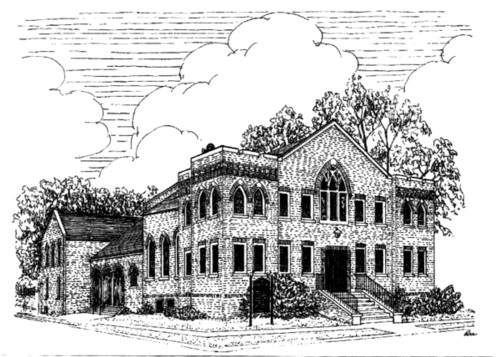 The following is the historic architect’s description of our building, which is a part of Fountain’s Historic District on the National Register of Historic Places.

This front-gabled Greek Revival-style church has Flemish-gables at the façade and rear (south) elevation, and crenellated towers at the front (northeast and northwest) corners. It is nine bays wide and seven bays deep with each tower measuring two bays by two bays.  The church features a running-bond brick veneer, a slate roof with modern metal coping at the parapet, a soldier course water table, and stained-glass windows with brick lintels and limestone sills throughout. Paired, batten front doors with a basketweave brick surround are centered on the façade below a large, tripartite Gothic-arched window with soldier-course brick arch with limestone keystone. The corner towers feature Gothic-arched upper-level windows with soldier-course lentils and limestone keystones and sills, soldier course water table, and basketweave and corbelled brick bands below the parapet. The first two bays of left (east) and right (west) elevations of the church are an extension of the corner towers with matching windows and parapet details. The rear three bays of the side elevations feature tall narrow Gothic-arched windows with pointed arch brick surrounds with limestone keystones, and there is a six-paneled door on the right elevation.

An asymmetrical gabled rear wing, added c. 1962, connects to a two-story, side-gabled rear wing.  The asymmetrical wing is one story on the left elevation and two stories on the right elevation with the left elevation featuring an inset logia with three Gothic-arched entrance bays that shelter two six-panel doors and a ribbon of three six-over-six, wood-sash windows. To the right of the inset logia is a Gothic-arched window. The two-story rear wing is three bays deep and six bays wide with Flemish-gables and fixed, one-light pointed-arch windows on the second-floor level of the left gable end, each with soldier-course lintels with stone keystones and sills. The rear wing and the right elevation of the asymmetrical wing feature six-over-six, wood-sash windows throughout with soldier-course lintels and stone sills. According to church records, construction began in 1924 and was completed in 1937. The original Presbyterian Church in Fountain, built c. 1911, was moved to 3327 S. Church Street, where it has been converted into a residence.