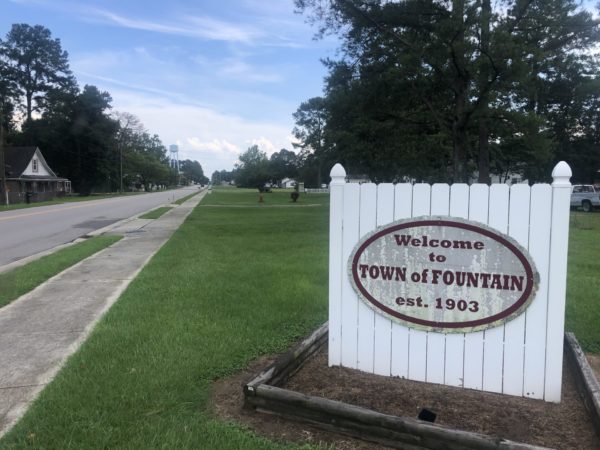 Since 1903, family living in the Peak (and Pit) of Pitt County, on the western frontier of the Pirate Nation.

Fountain is both the peak of Pitt County, at 112′, and its pit, a depth that deepens as Martin-Marietta mines. Our main street, Wilson Street, is an approximate boundary between the Tar River and Neuse River watersheds–rain on our northern half flows into the Tar, onto our southern half, into the Neuse.

We’re a one-block, one-stop light town, the western most in Pitt County, as near to Tarboro and Wilson as to Greenville.

Three webpages can help you figure us out: the Town’s official page, a friends of Fountain page, and a “You know you’re from Fountain if. . .” page.

Fountain was developed as a temporary terminus for the East Carolina Railway, begun in 1898 by Henry Clark Bridgers. His plan was to connect Tarboro with additional logging opportunities, and he added a town to his railway every few years until it reached Hookerton.

Fountain thrived as a railroad town and as a mule town, and even as a car town it did okay until the US 264 bypass in the early 1990s. The decline of its business district since then reflects the fate of most of the small towns of eastern North Carolina.

Although Fountain remains a pleasantly livable town and, with its wide streets and lack of traffic, a great place for children to grow up, it also presents a difficult environment for a small business to do well. That could translate to affordable sites, both for potential businesses and residences. Music Maker has been the first to recognize this potential.

With US 264 set to be re-designated to Interstate status, we’re poised for dramatic growth: being within 8 miles of an interstate and under an hour from Raleigh will change us irrevocably. Hopefully that growth will be smart, and along with it we’ll get public transportation and high speed internet.