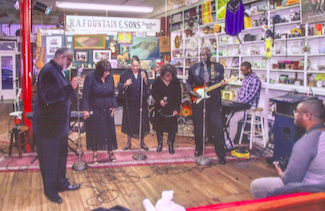 The Glorifying Vines Sisters headline this sacred soul showcase, with good friends from Tarboro Shirley McNeil and the Gospel Singers of Faith.

Also singing will be Wilbert Vines. “No kin to us,” says Alice Vines, “but a really good singer. He’s from New York but has moved down here and people are going to like him a lot.”

The Vines family, which includes brother Freeman, is one of East Carolina’s most outstanding musical dynasties. They’ve been recording for over 60 years, going back to when their mother was featured singer. They were also featured on the 2021  Bible & Tire compilation Sacred Soul of North Carolina, which was recorded in downtown Fountain, at Freeman’s shop, also known locally as MusicMaker East..

McNeil and her Gospel Singers auditioned in Farmville for the next Bible & Tire recording, which like the original will be distributed by Fat Possum Records.