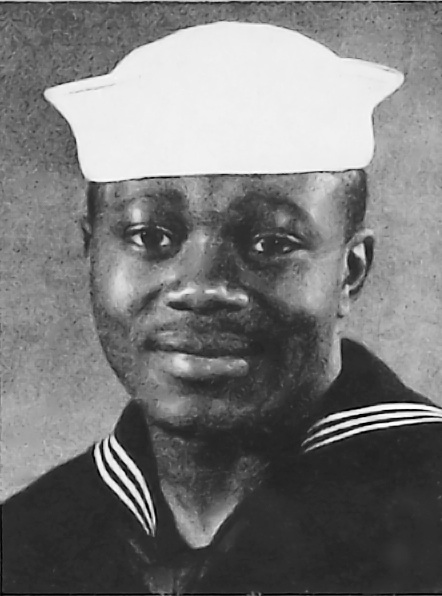 Wray Raphael Herring, Sr., was born January 31, 1926, in Parkersburg, NC, to Hanson and Lugenia Herring. He was living in Greensboro and attending Dudley High School when he enlisted in B-1. After the war, he graduated from NC A&T and began teaching in public schools, serving as band director for 32 years at Huntington and Ferguson High Schools in the Tidewater, Virginia area. He also operated a farm that he loved at his Gloucester, VA home.

He was married to the late Sadie Ruth Herring. Their daughter, Joan, is also deceased.

He donated several items to Special Collections in Joyner Library at East Carolina University. Known as “The Wray Herring Collection,” many of these documents were vital in documenting the story of B-1–as was Mr. Herring’s acute memory of his Navy days and his gracious willingness to share those memories. He was also responsible for bringing home the V-disc recording of the Manana Meteors made on KGU radio in Honolulu.

Half of them survive, and those who are healthy enough to travel will trek to Virginia next weekend for a reunion that will start in Gloucester and end in Williamsburg.

They were the Navy B-1 Band, an inauspicious title for the first black Navy men whose duty was something other than working in the galley, cooking, serving and washing dishes.

As an experiment they were a resounding success, says Wray R. Herring of Gloucester, who is hosting the group this year.

Although they never went overseas, spending the war at Chapel Hill, N.C., and in Hawaii, their success as musical ambassadors led to other all-black Navy bands as the war progressed. All the B-1’s alumni went on to distinguished careers as band directors and teachers, Herring says. The B-1 Band’s director, James B. Parsons, became the first black federal judge appointed by President Kennedy.

“I was 16, but I had to say I was 17, and my dad had to sign for me. He did, because the draft was looming and he believed this was a good opportunity for me,” says Herring, who is retired after a career as band director at two Newport News high schools – Huntington for 21 years, and Ferguson for 11.

Parsons was Herring’s high school band director in Greensboro when the B-1 experiment was hatched, Herring says.

“It was the brainstorm of the Secretary of the Navy, the president of the University of North Carolina and the governor of North Carolina,” he recalls. The idea was to organize an all-black band, composed of North Carolina musicians, as a morale booster for a pre-flight training school the Navy was starting at Chapel Hill. All students at that school were white.

Most of the musicians who joined were students at North Carolina Agricultural and Technical College in Greensboro. One of them was Newport News native Royland V. Siler, who died several years ago, Herring says.

The recruits were sent first to Norfolk Naval Base for what Herring calls “so-called boot training.

“We did calisthenics and got a series of shots. That’s about all.” He says the musicians had so little naval training that later at Pearl Harbor, aboard a ship, a band member asked a real sailor how to get “upstairs,” giving the real sailors “a good laugh.”

The band members gave themselves a good laugh on another occasion, Herring remembers, when the group was accompanying a singer performing “The Star Spangled Banner” in a concert for the Chapel Hill cadets.

“We hadn’t been able to practice, and when we started we were in different keys, and neither of us gave in. We went on like that to the end. It was awful. Disastrous,” he says, chuckling at the memory.

But mostly their performances were quite good and greatly appreciated, he says. They marched in parades and gave concerts, as a full band. Broken into smaller combos, they played for dances and parties. A high point was accompanying superstar singer Kate Smith on one of her radio shows at the Carolina Theater in Durham, Herring says.

“I think we were the first black group that ever appeared on that stage, and that really made us proud,” he says.

Simeon O. Holloway, who will attend the reunion from his home in Las Vegas, remembers that the band also accompanied another of the hottest popular singers of the time: Helen O’Connell.

Huey Lawrence joined the B-1 Band from A&T, which he was attending on a football scholarship. He’d already been playing trumpet professionally in Pittsburgh while in high school there, and became one of the B-1’s soloists.

One of Lawrence’s fondest memories was of marching in the victory parade on VJ Day, celebrating the end of WWII, in downtown Honolulu.

He calls his first parade with the band his “most unmemorable.” That was when the group marched through Chapel Hill to its barracks after arriving from Norfolk. People threw mud and rocks, and they jeered and hurled racial epithets. The band ignored the hostility and continued its march.

“I guess being young and in the service, we took it with a grain of salt. We didn’t want to do anything to bring dishonor on the band. We were the Jackie Robinsons of that black musical experience.

“We weren’t perfect, but we were not disgraced,” says Lawrence. He says he eventually fell in love with the people of Chapel Hill, and makes his home in Ayden, a suburb of Greenville.

When the band gets together next weekend, they’ll share some food, some jokes and some recollections. A few might bring instruments and jam, but they won’t try to capture their old sound, says Herring . Too many of the players are too old for that, he says.

But there will be music, he says. They’re hiring a band.

Caption (of a photo that didn’t reproduce): Staff photo (color) by KYNDELL HARKNESS Wray R. Herring of Gloucester holds the old trombone that he brings out only on special occasions. Herring , now 72, was the youngest member of the Navy B-1 Band during World War II. Photo (b&w) All of the B-1’s alumni went on to distinguished careers as band directors and teachers.

[originally published in the final edition of the Daily Press (Newport News, VA) on December 18, 2004: C6]

Admirers and former students will pay tribute to Wray Herring, who worked at Huntington High during 1950-71, tonight.

Students of retired band director Wray Herring remember him as a skilled musician, an inspiring leader and a good friend.

He also was prone to destroying batons.

“The man turned breaking batons into an art form,” said former student Oscar Gaskin, a 62-year-old Hampton resident. “If somebody messed up, the baton was going to break. He was a strong man. He was a good man. He instilled a lot of morals in us.”

Herring , 78, will be honored at 7 p.m. today at Mary Helen’s Restaurant, 87 Lincoln St. in downtown Hampton. Admirers and former students will stop by to pay tribute to the man who led the Huntington High School music program from 1950 until 1971. He’s been identified as one of the few surviving black local band directors from the pre-integration era. Huntington — at 30th Street and Orcutt Avenue — educated black students from the East End and throughout Newport News.

Herring helped the Huntington High Vikings become one of the most decorated marching bands in Virginia. It was satisfying work. “I enjoyed it very much,” Herring said, “every minute of it. And my former students keep thanking me, not necessarily for the music but for the other things I taught them. This event is another example of that.”

Herring taught his students what he calls “points for living.” They included being prompt, being truthful and getting along with other people — “all the things people need to be successful in life,” Herring said. “Students from way back in the ’50s, they still say, ‘Thank you.’ ”

Discipline was important to Herring , whether he was teaching band class or leading the marching band on the field. “During marching season, we started practicing at 7 a.m. in the morning. I would say to them, ‘When the shipyard whistle goes off, the drum major’s whistle goes off at the same time.’ If you weren’t there, you were absent. They appreciated that.”

The start of practice was so reliable that some people in the neighborhood used the sound of the band as an alarm clock, said musician Everett Hollins, whose wife grew up near the high school.

After integration, Herring found maintaining discipline more difficult. “It started to erode about that time,” Herring said. “Before, we had very strict discipline. Parents and administrators would back you up. Afterwards, you couldn’t control them because your hands were tied.”

Gaskin, who attended Huntington from 1955 to 1960, said Herring ‘s admirers hoped to raise enough money to create a foundation in his name. The foundation would help to get more instruments into the hands of young people on the Peninsula.

“This man is a legend,” Gaskin said. “Our idea is to do something to give him recognition he deserves.”

Tickets to tonight’s event are $25.