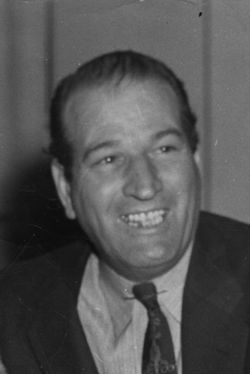 this page is under construction

By August 1942, Louis Messina (1910-1986) was actively promoting music and events at his two businesses, the Gypsy Tea Room and the Victory Arena, where he also promoted weekly boxing matches. He brought Louis Armstrong to the Victory (also known as the Coliseum Arena) and the GTR on August 9, 1942 in a pattern repeated often over the remaining years of World War II: a big concert at the Coliseum followed by a late-night party and celebration at the GTR. Armstrong returned the following year, with a street parade with band and civilians marching prior to the Coliseum show, “a Mardi Gras celebration,” all sponsored by Messina, “leading the south in prize-fight and dance promoter.”
Timelines that bring Messina into control of these two businesses are not completely clear. GTR was operating as a successful club when Eddie Burbridge visited in 1937 on his “jive tour of clubs,” reporting that he stopped by “Johnny Tessitore’s Gypsy Tea Room for their last floor show” as well as Mike Tessitore’s Japanese Garden. At the GTR, he ran into Allen Page, “big boss of the Black Pelicans”—another local sports and entertainment promoter. The Weekly would write, in 1948, “Local baseball and boxing fans are fortunate in having two of America’s outstanding sports promoters in their midst. These two astute devotees of top-notch sports are Allen Page, the South’s premier impresario of diamond excellence, and Louis Messina, Dixie’s own version of the immortal Tex Rickard.” Featured at the GTR were Alma Purnell, the Sepia Eleanor Powell (whom many said was a better dancer than Ginger Rogers but not a better partner to Fred Astaire) and Stove-pipe, the comedian, who was “a scream. “ 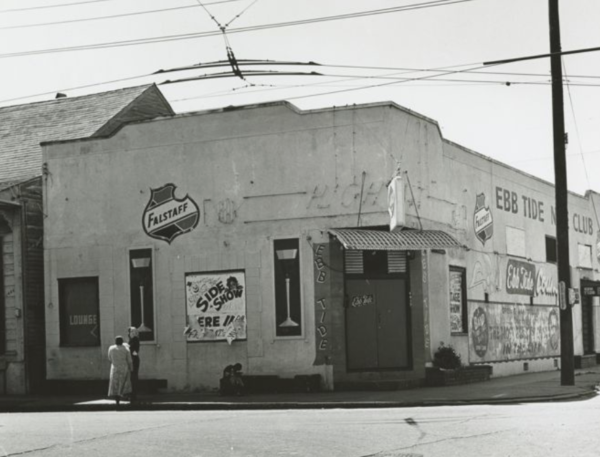 Messina is identified as “the genial proprietor” of the Gypsy Tea Room in December 1939, his name thereafter mentioned in the Louisiana Weekly increasingly as a music promoter and organizer. His first boxing promotion was a July 10, 1942 card at what had been the Coliseum Arena but was re-branded as the Victory Arena earlier in 1942.. The Times-Picayune reported in July 1942 that Messina had recently been licensed by the Louisiana Athletic Commission to succeed Lou Ovalasiti as the arena’s boxing promoter. Harry Frisch, lease-holder, would be subleasing it to Messina for a series of Friday night fights for Blacks, with “one section set aside for Whites.”  BoxRec.com contends that he took over promotion of African-American boxers in New Orleans from Heard Ragas in 1942, calling Messina “the most successful promoter in New Orleans during World War II.” By September 1943, he had re-branded it again as Coliseum Arena, often just “the Coliseum.”
Messina lost his one boxing match, as a featherweight, knocked out by John King at 1:32 in the 2nd round on May 8, 1928, in Madison Square Garden, in the second round of the AAU state Championships, which seems to indicate he was a New York native. How he subsequently got to New Orleans as a club owner is not clear.
The Louis Armstrong show in August  1942 may have been Messina’s first big music promotion. He subsequently moved to blend his GTR shows with Sunday night promotions featuring the best Black entertainers in the U.S. , usually with a local act like Sidney Desvigne or, by 1944, the Dooky Chase Orchestra. In addition to Armstrong, locals could see any of these acts for about a dollar at the Coliseum: Lucky Millender, Ella Fitzgerald, Jay McShann, Cootie Williams, Hot Lips Page, Jimmy Lunceford, Tiny Bradshaw, Fatha Hines, Billy Eckstine, Dizzy Gillespie, Louis Jordan, and Billie Holiday. Some came back again and again. Tickets for the Armstrong show on August 9, 1942, with dancing from 8 p.m. – 2 a.m., were 90 cents, advanced; $1.10 at the door; .55 for the balcony but for future Messina-promoted shows, they were generally $1.25 advance, $1.50 at the door, and $1 for servicemen and balcony seats.
When the Coliseum Arena was built in 1922, it was billed as “one of the finest and most compact indoor auditoriums in the South,” with a seating capacity of 8,000. Its boxing matches were a highlight for visitors to New Orleans, according to the 1938 WPA New Orleans Guide. By the time Messina took it over, it was in need of repair, and locals were loudly complaining about the quality of boxing that it was hosting.
Mussina seems always to have been an expert at promotions, and he knew the value of publicity in Black audience newspapers like few other White promoters of his time. The Chicago Defender began covering New Orleans’ Black boxing scene regularly, reporting that Messina “is noted for his fair dealing with Negroes in the past” and “promises to bring the best talent in America to the Victory Arena.” The crowds for Friday night fights at the Victory increased because of the quality of fights, their high visibility, and Messina’s skills at promotion. He often admitted Black servicemen free and also began promoting boxing at Pelican Stadium, in December 1942 putting on the first outdoor boxing match in the city in 8 years.
Big shows had come to the Coliseum as well as local clubs prior to World War II but without a promoter’s name regularly associated with them. When Armstrong performed in 1940 and 1941, promotion focused on the venue–the Rhythm Club–and not a named promoter. During the late 1930s, the Rhythm Club  and Tick Tock were brought a few national acts–Ella Fitzgerald and Walter Barnes, for example–but the live music scene was dominated by orchestras and bands led by locals such as Desvigne, Papa Celestin, Don Raymond, Paul Barbarin, Fats Pichon and Joe Robichaux.
At least a couple of local White boxing promoters also had booked Black boxing bouts at the Coliseum before Messina took over that business in July 1942. In Messina’s first boxing promotion, Kid Percy defeated Johnny Monroe in an 8 round decision and Holman Williams knocked out Randy Brown in the 5th round. The card also featured two 3-round preliminary bouts and what would prove to be a staple of Messina promoted-boxing matches, a comic fight, this one featuring Kid Okra. These novelty comic bouts usually resulted in draws between such characters as Kid Hambone and the Praline Kid,  Memphis Lewis and Lolly Pop Jones, Midget Jones and Ringer the Kid. For that first fight, Messina reported 2,000 paid attendance with a $1,092.45 gate. An August 1942 fight card reported a 400% increase in gate, to $4,195.98,  and, for the feature fight, a Charley Burley upset of Holman Williams in the 9th.
Early in 1943, Messina traveled to St. Louis by airplane to sign a big bout, outbid two major Chicago promoters for another, and flew to New York to scout for a future card. At least twice he successfully got boxers suspended for failing to appear at bouts he had scheduled in New Orleans. He also worked with Allen Page to coordinate schedules of fights, baseball games, and music events. His outdoor promotions at Pelican Stadium attracted over 5,000 fans.

The Coliseum Arena, built in 1922. Its balcony occupied a 4th floor not visible in this faded roofline. Courtesy of Hogan Jazz Archives, Tulane University

Messina was clearly a man who appreciated local talent, which he promoted as aggressively as he did the traveling stars. He booked Sidney Desvigne’s orchestra as a regular feature on virtually every Saturday and Sunday night at GTR from 1943-45, often engaged in a battle of the bands with one of the touring acts as a feature. And he was also an early promoter of young Dooky Chase and his band, booking them at the Coliseum, in frequent battles of the bands and for jitterbug competitions there and at GTR.
He was not, however, an absentee White owner—he’s noticed by Louisiana Weekly reporters at the GTR and Coliseum, and at a John Hammond-produced show and dance at Camp Plauche in 1944. He remained active in New Orleans music and sports promotions for most of the 1950s. The Gypsy Tea Room hosted local  musicians union 496 meetings, and it did well enough that for a while in the early ‘40s, he operated a Gypsy Tea Room 1 & 2; in 1945, he re-modeled #1 to accommodate 2,000 dancers. He was elected president that year of the Dixie Promoters Association in a meeting held at the GTR. 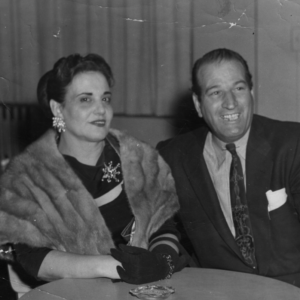 He married Marian Louise LoBuono in 1938 in New Orleans, and they had three children. Messina is a member of the American-Italian Sports Hall of Fame in New Orleans.. He was 75 when he died January 6, 1986.
Louis Messina, Jr. lives in Houston and is a leading music producer, counting George Strait, Kenny Chesney, Eric Church, Blake Shelton and Little Big Town among his clients. He grew up “on the streets of New Orleans” where he credits seeing an Elvis concert at age 7 with setting him on a path of music management. Presley played two shows at Municipal Auditorium on August 12, 1956. Admission started at $1.05; his dad was not the promoter of record.

A partial list of concerts & events promoted by Louis Messina in New Orleans, 1942-45. Too bad there’s not a musical entertainments data base as thorough as box.rec’s.

1942
July 10 boxing at Victory Arena
Times-Picayune: “Louis Messina’s first offering as a promoter of weekly Negro Friday night fights at the Victory Arena”
Kid Percy decisions Johnny Monroe, 8 rounds. Both were New Orleans natives though Percy was living in Baton Rouge at the time.
Holman Williams KOs Randy Brown, 5th round.
George Lewis KOs Lambert Ross. Both were from New Oerleans, Lewis making is pro debut.
Ed Smith KOs Eddie Smith, 3rd round. Both were from New Orlean and making their debuts. Ed Smith lost his only other fight, and this was Eddie Smith’s only fight.

July 31 boxing at Victory Arena
Kid Percy decisions Howell King in 12 rounds. “Amusing antics” of Kid Harry, a dwarf, and the Praline Kid are noted by the Chicago Defender.

Apr. 19 boxing at Pelican Stadium
Louis “Kid” Cocoa vs. Charley Burley, “the giant killer,” in a re-match of fight won by Burley. Seating for 10,000: “first colored boxing” at Pelican in five years. 2 preliminaries, starts at 8:30, main event at 10:00 p.m. First 5,000 servicemen free–tickets at the USO Center

Aug. 22 Louis Armstrong, Coliseum Arena
With a street parade, bands, and civilians marching , “a Mardi Gras celebration,” with bars and restaurants throughout the city featuring Armstrong tunes on their music boxes, all sponsored by Messina.

June 17 Dooky Chase and his trumpet and Rhythm Playboys vs. Ernie Fields, his trombone, and his 18-piece band, Coliseum

Dates are derived primarily from the Louisiana Weekly and the Chicago Defender and actual performances that match the dates have been verified when possible; I suspect that not all cancellations are reported and many shows are not reviewed or even briefly noted. I also feel like a better search of the 1937-1941 Louisiana Weekly will reveal more about the interim years of the Gypsy Tea Room.