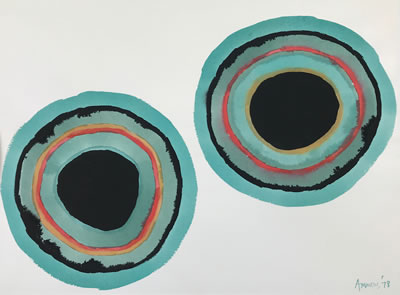 A Collection of Original Watercolors

When I moved to Winston-Salem from Chicago in 2001, I was unaware of A.R. Ammons, one of our great twentieth century poets, his long tenure at Cornell, and his North Carolina roots.

That came later, with the first of four privileged invitations to review the legacy of watercolor paintings he had given to his close friends Emily and Ed Wilson. In 1976, Ammons had begun to paint intently, a creative outlet for his anger and anxiety without the expectations due his poetry.

An art historian, I had seen millions of images of artwork. To encounter paintings so unfamiliar and compelling was rare and exciting. It still is today, an experience akin to following Ammons as he discovers further dimension to his creative intelligence / imagination: imagery cosmic, microcosmic, down home. From tentative beginnings into remarkable fluency, Ammons achieved paintings complex, indescribably beautiful, and often visionary.

John Hallmark Neff is an art historian and consultant. He taught at Williams College, directed five museums, including the Museum of Contemporary Art, Chicago, and built collections for the former First National Bank of Chicago and the MacArthur Foundation. A Matisse scholar, he has published also on Anselm Kiefer, Robert Irwin, and Agnes Denes among others. Education: Wesleyan University, A.B.; Harvard University, M.A., Ph. D.

Each Ammons watercolor is only available as part of special package that includes a signed copy from a limited edition of 100 copies of Emily Herring Wilson’s “When I Go Back to My Home Country”: A Remembrance of Archie Ammons, and a 2-sided limited edition print on acid-free paper, also from a printing of 100 copies: on one side, a reproduction of the Ammons watercolor used on the cover of Emily’s book, and on the other side, a photographic portrait of A.R. Ammons, signed by Susan Mullally, which was used on the cover of the uncorrected proof / review copies of Emily’s book..

Watercolors available for inclusion in the limited edition package are available on a first-come basis.

Individual watercolors will be marked as SOLD once they have been purchased.

The five watercolors in Group A are signed by the artist. Unless otherwise noted, they are on 24" x 18" Arches paper.

The three watercolors in Group B are signed by the artist and individually sized.

The ten watercolors in Group C are matted, signed by the artist and dated 1983. Each is painted on the back of a 4 3/4" x 6 1/4" gallery announcement card for a group show that included Ammons watercolors, "Recent Paintings," at the Ridge House Gallery, Lansing, New York, September 18-30, 1983. Individually priced.

The nine watercolors in Group D are signed by the artist and dated 1977. Unless otherwise noted, they are painted on watercolor paper and are 12 1/4" x 9."
$375 each

The eleven watercolors in Group F are signed by the artist and dated 1977. They are on 10 1/4" by 7" watercolor paper. Priced individually.