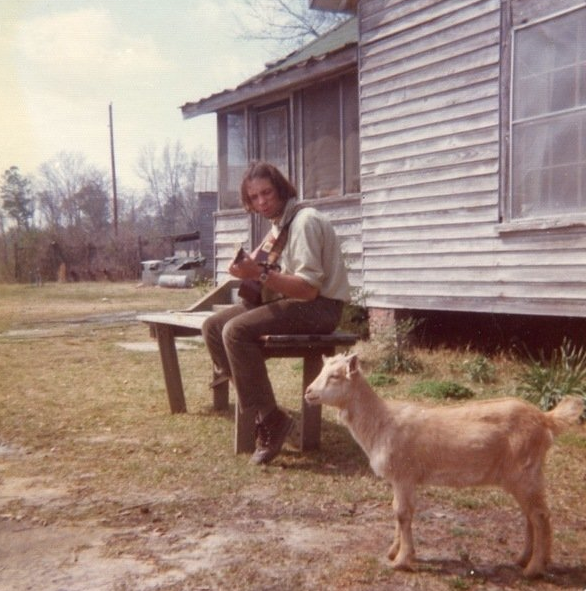 The Old Place had a Hinge to my Soul

I was sipping a morning cup of coffee and enjoying the memory of the jam session several friends and I had had the night before. The phone rang, but since I was at my girlfriend’s house, I didn’t pay much attention. Susan hung up and said, “There has been a fire at your house.” I ran out the door, jumped into my white ’65 Plymouth Valiant, and headed home.

At the time I was in my early thirties. I was a skinny guy with long brown hair who always wore a cap, a flannel shirt and either jeans or overalls. I was piecing together a living by playing in four different bands as either bass or guitar player. I also did some substitute teaching at a school for dropouts, and from time to time I was a carpenter’s helper. I was also an avid organic gardener with a goal of raising all the vegetables I’d eat. I wasn’t in the wheelchair yet so I was able to live quite inexpensively.

My house was about 15 miles through eastern North Carolina farm country from Susan’s. It was fall, and I noticed the recently harvested peanut fields, the yellowing leaves of the soybeans that hadn’t been picked yet, the reddish cotton plants with their fuzzy white tops, the barren tobacco and corn stalks that stood up like rickety sticks in long rows, the trees with reddish, brown and yellow leaves, and I thought about my house. I wondered if any of it was still there.

I loved that big old farmhouse from the first time I set foot in it. The two-story house likely hadn’t seen any paint in 20 years, which was part of its charm. The place had upstairs and downstairs porches, and its most distinctive feature was the etched glass in the porch door showing two children playing. Another dominant feature was the presence of the large oak trees on two sides in the front. They were likely “husband and wife” trees. In the late 19th century, when a couple built a house, they would plant a pair of oaks. These trees would provide much-needed shade in an era before air conditioning. Another attraction of my home was its rent. $75 for a five bedroom house was a bargain, even if the wind occasionally whistled through the walls. If I couldn’t live at the farmhouse, I might have to rent a more expensive place in town.

As I drove closer to Belvoir, I started to get a lump in my stomach. Was my house totally burned or maybe just a bit burned? I had trouble imagining not living in the place; I’d been there seven years. Immediately, memories flooded my mind. There was the time Charles, the landlord’s son, had come over with his rifle at my bidding because there was a rattlesnake beside my car, only 15 feet from the house and in a yard full of kittens and dogs. I remembered my first housemates. Six of us lived together for two years. We cooked, partied, and talked endlessly about books, music and politics. Huddling under sleeping bags in the living room, we drank tequila when we ran out of firewood. Our first year together was great; the second was not.

I also thought about the two goats that lived at the house at different times. Both would either run or fight with the dogs. One, Katsiki, would go out into the peanut fields with me to glean after the harvest.

She followed me around the field and ate the peanuts while I gathered them to eat later. There was Mr. Wiggins, my silver-haired, blue-eyed rabbit who stayed in the shed beside the house and always seemed to be in a cheerful mood. There was a mockingbird, too, not a pet, that would always perch on the electric line that ran overhead and sing while I worked in the garden. How could I be happy anywhere else? We had some great parties there, too. I couldn’t imagine the thought of possibly having to live somewhere else. Where else could you have an electric jam session that began at 10pm in the evening and continued until past sunrise? I remembered all the times my friends and I would sit in the living room and play and sing for hours. There were two consecutive evenings one summer when cousin Bob and I made up songs in the living room, and both times a toad hopped through the room, went into the kitchen and hopped back into the yard by way of the kitchen porch. Of course we made up a song about that! I’d even written a song about the house whose hook line went. “Well the old place has got a hinge right to my soul.”

By now I had pulled off onto the dirt road where I lived. I looked for the house, but I couldn’t see it yet. The lump in my stomach got bigger. I saw the crepe myrtles in the driveway, and I saw the big oaks, but where the house had been there was only a pile of ashes. I took a deep breath and got out of the car. All that remained were two chimneys. I slowly walked into the ashes to see if there was anything that could be salvaged. Figuring where my bedroom had been, I poked my shoes into the rubble and found the ceramic jar where I had placed two $20 bills for safekeeping; needless to say, I found more ashes. All my clothes were burned, all my books and records, all the photos and paintings friends had given me— everything. The only thing that survived the fire was my cat, Aspen, who recently had a litter of kittens. They didn’t survive, but Aspen went on to have many more kittens in her long lifetime.

Perhaps because of the way I was raised, or perhaps because I am by nature a slow griever, I didn’t cry. Instead I went for a long walk around the place to which I’d grown so attached. I walked down the long path beside the ditch bank that stretched to the back fields. I walked past the spot where I’d watched the great blue heron catch a fish and slowly swallow it. I walked to the clearing where I’d surprised a bobwhite with her brood of chicks and had amusedly observed her trying to distract me from them. I passed the place on the ditch bank where I picked blackberries every year in early July. I walked by the persimmon tree whose fruit I always picked around Thanksgiving time. I stopped to rest by the grove of old pecan trees that were past their prime. I was saying goodbye to all these favorite places because that was all I could do, and these places seemed to be telling me that nothing stays the same and that I would be fine.

My friends gave me clothes, a wild, wonderful assortment of clothes. They even threw a benefit so I could buy new clothes. I was bad; I bought a Gibson electric guitar instead. Luckily my other instruments had been at Susan’s for the jam session. She lived in the country too, so we moved the cat to her house. Oh, and she let me move in. She had a good garden spot.

I’ve always wondered about the phenomenon that causes a person to feel truly at home in one place more than in another. I can honestly say that I felt more at home in the old house in Belvoir than at the farm where I grew up in Vermont. Is there a part of our subconscious that recognizes our home? Do we only find one in a lifetime, or is there a chance I’ll find another place I can love as much? Is it possible that home is within, in the heart? I have learned that you have to let go of what you love; that lesson keeps coming around to bang me on the head periodically. But as long as I have memory, I can revisit that old house and walk around those fields again.

Donna Davis found this story among the Mike Hamer Papers in Special Collections at ECU’s Joyner Library and transcribed it for publication here.