Marshall Stephenson has been picking and promoting bluegrass and traditional country music in East Carolina since the 1950s. He and his brothers, Shelby and Paul, performed with the Stephenson Brothers & Linda at RAF several times, including the store’s grand opening in November 2004.

He founded the Eastern North Carolina Bluegrass and Folk Festival and has been responsible for bringing many of the best known country and bluegrass artists to the region.

It was the response we got to their performance that made us re-configure the business to accommodate live music, and that night, seeing bluegrass performed live (and so beautifully) made a fan out of me. One of our most memorable shows, at Christmas the following year, closed with a transcendent rendition of “Silent Night” sung in a capelllo harmony, our house lights off and everyone holding candles. 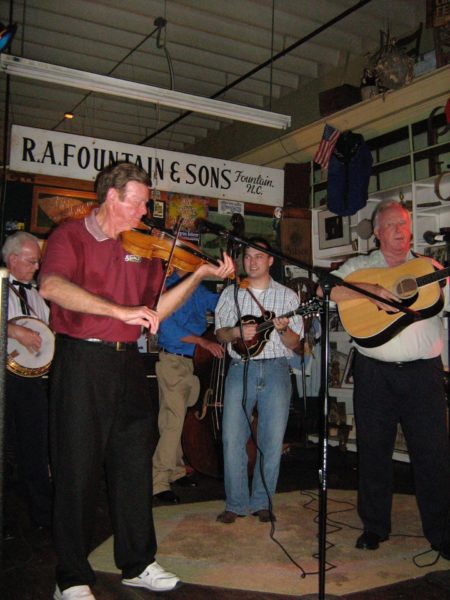 Marshall also performed here many times, with his Bluegrass Train Band (named after his long-running bluegrass radio show), with brother Shelby, and as a host for bluegrass jams. He introduced us to some of the best bluegrass talent around, including Tim Smith, Curtis and Ruth Lee, Tim Myatt, Joe Pessolano, and John Mark Batchelor, among many others. He was hosting our jam when Patti Hopkins made her first public transition from classical violin to bluegrass fiddle, and everyone in the house knew they were seeing a very special talent emerge.

He has an admirable talent for making excellent CDs in honor of his musical heroes, and they invariably include some of the best pickers around.

Tribute to Clyde Moody. Buy it.

Tribute to Flatt & Scruggs. Buy it.

Back to the Fifties: Singing Country. Buy it.

Back on Track. Buy it.