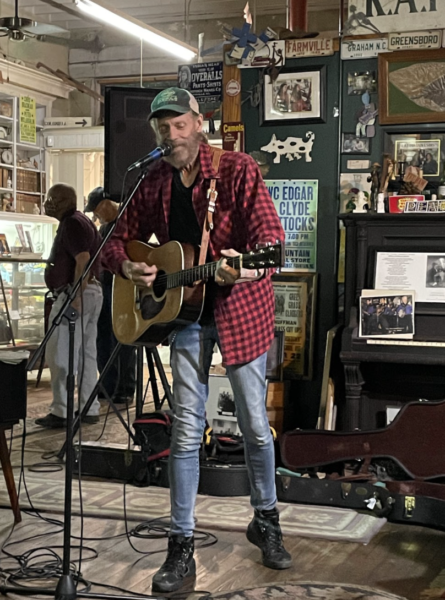 “Do you know any happy songs?”

I asked the musician the honest question during his break as I was trying to decide which of his CDs to buy.

I was kidding. Sort of. He’d been treating the audience to serial cry-in-your-beer numbers, mostly focusing on dead or dodgy wives. And when I say “beer,” that’s probably too diluted for most of his lyrics. One of his CDs is titled Alcohol of Fame.

Touring musician WC Edgar started out the evening with an Ernest Tubb number that included the words, “I’ve got half a mind to leave you / But only half the heart to go.”

He eyed a fellow on the front row very near me who was wearing a veteran’s cap and asked, “You served?” The fellow nodded. “Vietnam?” Another nod. “How many times?” The fellow raised four fingers.

Then Edgar launched into an original song from the perspective of a kid who turned 19 in Vietnam in 1969.

The singer with a guitar slung around his body wore black, ankle high boots, faded blue skinny jeans, a black t-shirt, and a loose fitting, untucked black and red checked shirt. His full beard, mustache, ponytail, and trucker’s cap gave him the look of someone who spent considerable time on the road, sleeping in the cab of his truck. At some point he mentioned being a vegetarian. My sister whispered that apparently being a vegetarian meant he didn’t eat at all. I whispered back that you’d think he would be more substantial from all the alcohol he sang about. 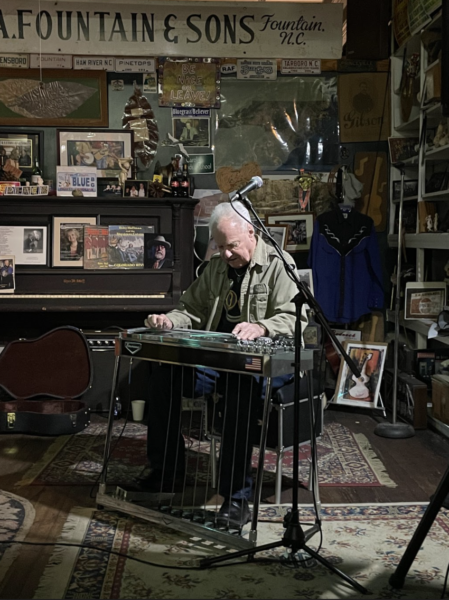 He was accompanied by local steel guitar legend Clyde Mattocks. They didn’t normally play together, so between songs Edgar would often turn towards Mattocks and give key cues. Like “Grab a handful of G.”

A steel guitar player himself, Edgar was clearly impressed by Mattocks’ command of the instrument. He looked at him after a song and said, “You had that descending lick in there…I want you to tap it out for me tonight before you get paid. I’ve been trying to find it for 40 years.”

The two had a rapport that was evident. When Edgar stepped away from the microphone and looked over at Mattocks, that was his wordless cue to play a break. Sometimes Edgar gave more definitive direction, like “Give me some whine with my cheese,” or “Give me some truck sounds there” when he was playing “This Ol’ Freightliner and Me.”

As the duo continued with a set list punctuated by Merle Haggard, George Jones, Johnny Paycheck and original songs, my eyes roved. I noticed a sign propped up in the corner of the R.A. Fountain General Store, “See us for all your hog killing needs.”

Lyrics jumped out occasionally for their country-clever quotient. Like “I tried but I can’t drink you off my mind” or “From where I sit, I can see where you stand.”

Edgar introduced one song by saying, “It’s a little out of my wheelhouse, but it goes over well on the road. I don’t know if it’s just the women….but it’s for all you mothers out there.” Then he surprised the audience by launching into Elvis’ “I can’t help falling in love with you.”

His voice had a rich quality to it, sometimes featuring dramatic low notes for color. He channeled country legends as the song required. During the break I had commented to him, “What a voice you have!” The compliment was genuine. And his response was appreciative. “It’s vocal compliments like that… that keep me going.”

To my left, a fellow I knew to be Clyde Mattocks’ brother, Tommy, chimed out loud, “I know that was for the ladies, but is it okay if we liked it too?”

“Turn me around to the 4,” Edgar would say occasionally to Mattocks and he responded by playing a few bars of lilting music that set the vocalist up perfectly to come back in. Often Mattocks’ runs on the steel earned him appreciative applause and occasionally a yelp, though it was generally a well-behaved audience.

“I’m not a very religious person,” Edgar confessed, adding, “Heck, I’m not religious at all. But I have been blessed to work with musicians that have such an aura about them.” He turned to Mattocks, “I’m so glad you agreed to do this with me.”

“All the time you want!” Alex Albright shouted from the audience gregariously. “There’s no curfew here and I only live a block and a half away.”

The proprietor added as an afterthought, “But didn’t you say you were driving to Charlotte tonight?”

After playing an instrumental that featured Mattocks’ talent, Edgar started bringing closure to the evening with a song he described as “one of my own, but a Paycheck sort of thing” called “Any Honky Tonk Night” (in the key of D, as he informed Mattocks).

He closed with a Johnny Paycheck song featuring the spirit bolstering lyrics, “Tonight I feel like an old violin / Soon to be put away and never played again.”

Yeah boy! As a collective audience we were astonishingly chipper as we left through the screen door, given the somber songfest we’d enjoyed that defines old time country. But it was a beautiful body of music and I won’t hold that against him. 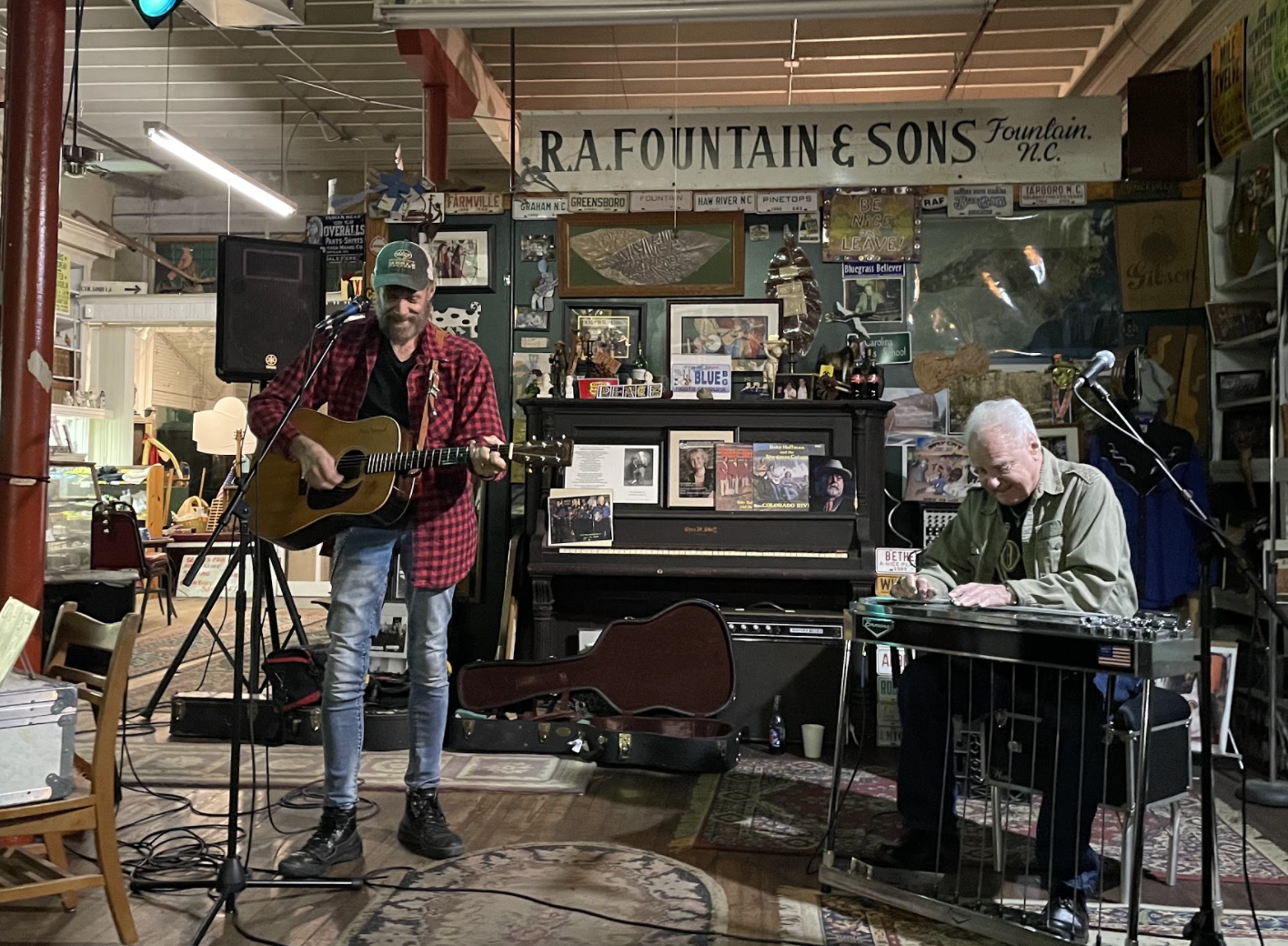