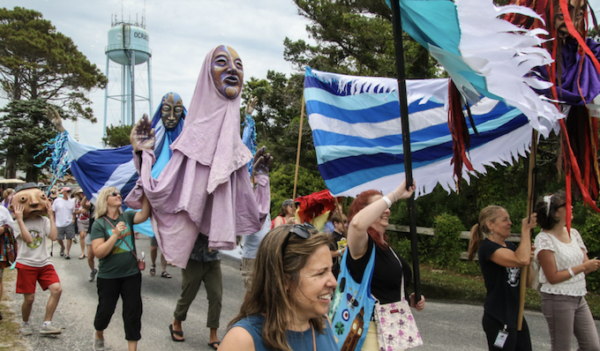 The Ocrafolk festival has more stories than daytime television at Grandmama’s. Yarns from Josh Goforth about “buzzard Baptists” to family trees that look more like wreaths. But only some of the tales come from the professional storytellers; others unfold through raw, confessional song lyrics full of angst and humanity. From antics of organizers, performers, and attendees. Collectively, they put the “folk” in the Ocrafolk  music and storytelling festival–and each has a story. 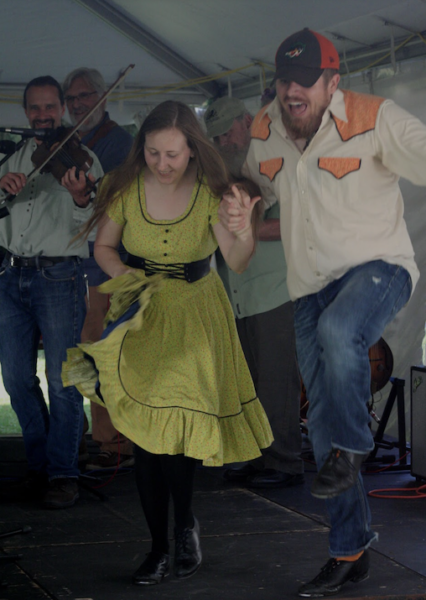 Like the couple from the original Washington that boarded the Swan Quarter ferry on foot pulling their luggage behind them. It was a sign of the times–they said they used to take their own boat, but now it would cost $1500 in gas for the trip.

A chatty passenger on the way over shared his difficulty in finding a motel room on Ocracoke and how close he came to having to camp: “I could rough it, but I do that every day on my job [as a logger] so on vacation, I’d rather not have to.”

Jonathan Byrd, based in Carrboro, shared his story about coming over on the ferry Friday evening around about the time a storm blew up. He was feeling like he was in the middle of a Wizard of Oz experience as he took a picture of the lightning and waves from the ferry and sent it to his girlfriend. And then he lost cell phone reception. “Don’t ever do that, people,” he counseled the audience Saturday night when he performed. “I called as soon as I got on land to say I was all right.”

Playing the last set of the day that ended at 10:30pm, Byrd commended the audience for staying up late but joked, “You realize bars are just getting started about now.” He said he used to be cool, adding, “I’m still cool…I just go to bed.”

Wearing pencil slim burgundy pants, ankle high boots, a white shirt with flowers, a beige cowboy hat, and an intense look, Byrd said. “You have to play one train song every set or you lose your country music license.”

The next day, master of ceremonies Louis Allen remembered that and said, “Son, you’re on Ocracoke. If you can find a train, I’ll give you a dollar.”

As he told a story about his ex-wife, a Jewish girl from New York, Byrd’s North Carolina roots started showing: “I was writing her a love letter and I had to tell her how important pork is to me.” Then he launched into a song about an essential ingredient to good barbecue. He coached the audience, “You can sing ‘All I need is white oak wood’ really loud and you’ll go to heaven when you die.”

During a short break between performers, a host occupied festival goers by teaching a song that required each side of the audience to carry a different part. When an elderly audience member was complimented for holding down the melody with his robust voice, even after most others faded away, he said, “Well, I was an opera singer in New York when I was 13.” 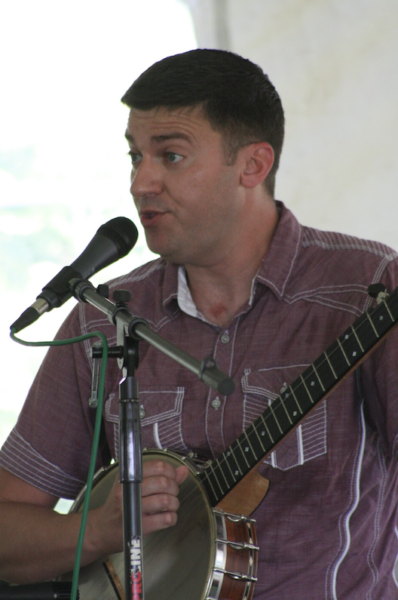 It’s hard to tell whether Josh Goforth, who hails from Madison County, should be called a musician who tells stories, or a storyteller who is a remarkable instrumentalist and singer. His down-home witticisms, allegedly borrowed largely from his grandmama, had the audience asking if he was related to story-teller Donald Davis. His answer was simply, “Probably.” That’s when he explained that his family tree looked more like a wreath. And by the way, “Buzzard Baptists” (according to Goforth) are “those who only go to church when someone dies…and even then, they just circle around it.”

When he started learning to play the violin, he told his grandmama he’d heard people say, “The devil lives in that fiddle.” She replied, “Oh no, honey. The devil doesn’t live in the fiddle…he lives in the fiddler.”

Harp-guitarist Muriel Anderson’s story unfolded visually on a large screen behind her as she played the unique instrument. It told of a precocious, tow-headed child whose talent with the guitar grew as she did and opened doors for her to play alongside greats like Chet Atkins, Les Paul, and Doc Watson. When she played the combined harp and guitar with multiple courses of strings to the tune of Don McClean’s “Vincent”–while singing the words in French and a Van Gogh image projected behind her–the audience recognized a personal diary entry was being written right before their eyes and ears.

Introducing Aaron Burdett from Saluda, a host said, “I’m pretty sure you wouldn’t be sitting here at this particular time in this particular swamp if you didn’t know what you were about to hear. You aren’t casual listeners, you have something going on.” And that pretty much described the attentive Ocrafolk audience for the entire event. They didn’t take planes and cars and ferries to chat through a performance.

In his original song “Arlo,” taken from conversational bits gathered from his friend over time, Burdett put listeners in the steel-toe shoes of a working man.: “I’ll keep molding metal as long as they can pay / Just like they’ve molded me into what I am today.” And there were words everyone could relate to: “Wish I could go back and do it again without the stress….just the happiness.” 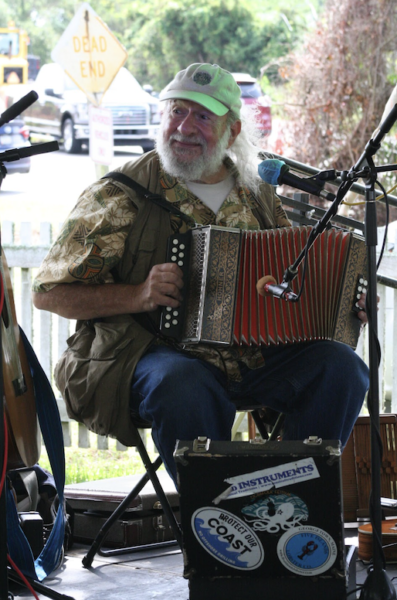 Zentz told a story about taking a guitar-building class and he wrote a song about it with lyrics that would make any luthier smile: “While the glue dried we played music to fill the wood with song,” and “We were building for the music like a miner digs for gold.”

Jeanne McDougall Zentz introduced a song by saying, “It’s in the key of B flat but we’ll try not to be.” They explained they try to maintain their “Zentz of humor.”

Eastern North Carolina, Greenville specifically, was well represented by the likes of the Wyldwood String Band, Lipbone Redding, and a cameo appearance by some members of the Greengrass Cloggers. 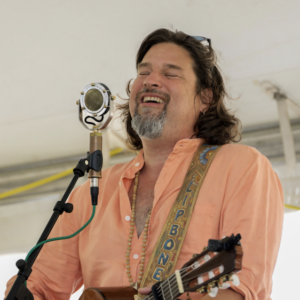 Wyldwood (including Greenville native Sarah Hollis) took the blues out of bluegrass with their happy-bordering-on-giddy facial expressions and peppy twists to familiar tunes.

Greenvillians Leanne Smith, Joshua Lewis, and Ashley Lewis kicked up their heels, quite literally, to finish out a Molasses Creek set with a flourish.

The very-familiar-in-these-parts Lipbone Redding charmed the audience with his trademark hypno-hippism and uncanny ability to produce instrument sounds with only his mouth. He told stories about meeting his “spirit guide” who did a “Mongolian goat herder dance” in a New York City subway.

The three day festival, held June 3-5 with multiple outdoor stages, was organized by Molasses Creek’s Gary Mitchell, David Tweedie, and a host of “Ocrafolk Alive” board members and volunteers. It included more performers and plotlines than can be abridged. But as Mitchell made his rounds, offering well-wishes like a country preacher to festival goers and performers in their cars waiting for the ferry to leave the island, the overarching title of the weekend’s story was abundantly clear. It’s also a signature Lipbone Redding sing-along: “How does it get any better than this?” 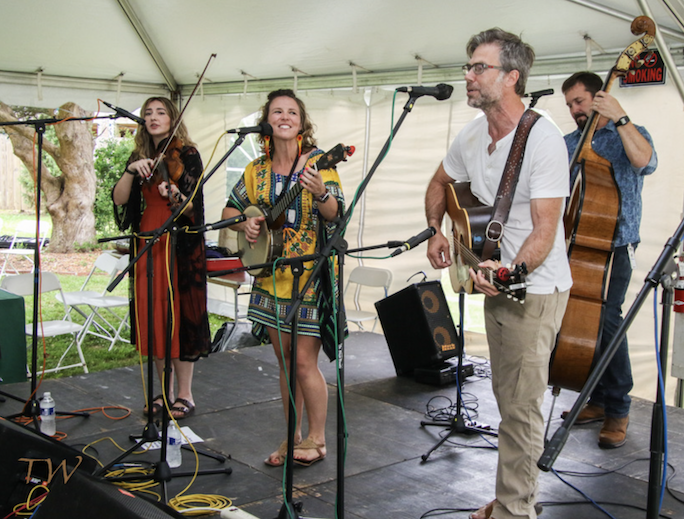 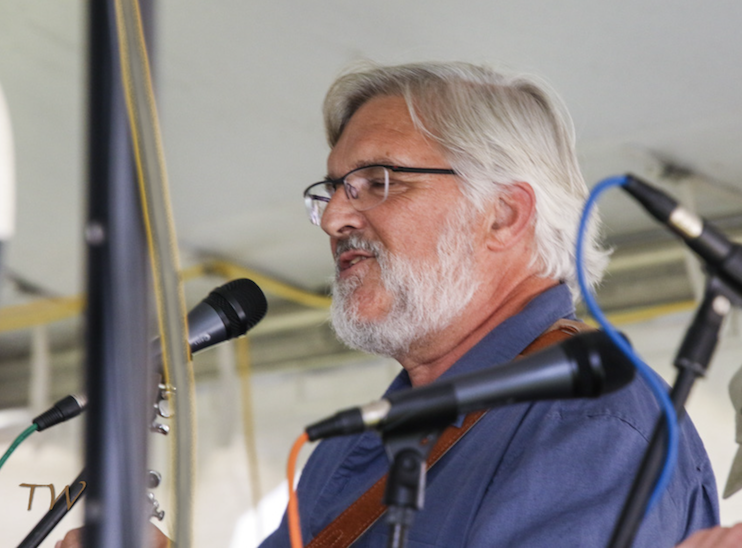 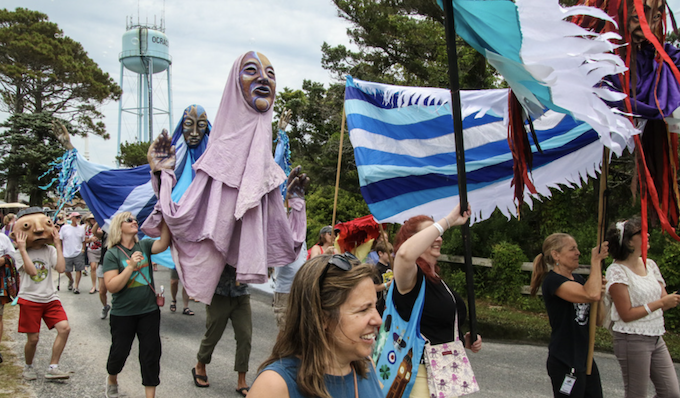