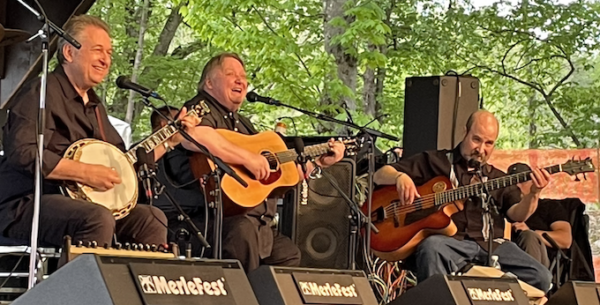 2022 marks the 50th anniversary of  the Nitty Gritty Dirt Band’s seminal album release Will the Circle Be Unbroken. The band’s appearance at the Merlefest music festival in Wilkesboro last weekend brought them – and throngs of fans – full circle. The album included many great old time country and bluegrass legends, including Doc Watson. The record also marked the first meeting of Doc Watson and Merle Travis, after whom Watson’s son, Merle, and then the festival was named. “It’s a family reunion at Merlefest on a Saturday night!” shouted Ketch Secor of Old Crow Medicine Show. He summed up the festival sentiment in his typical wild-eyed, animated-verging-on-frenzied style. And the music was fried chicken on a red-and-white checked tablecloth to appetites hungry for a heapin’ helpin’. Old Crow Medicine Show surprised festival-goers with an impromptu busking set in front of the mid-campus fountain to commemorate their own Merlefest anniversary. Twenty years ago they were playing in front of a drugstore in Boone when Doc Watson happened by, liked what he heard, and asked, “Want to play at Merlefest?”

Of course a family reunion would not be complete without its colorful cousins and characters. Like “Boogie Cat Erwin” (helpfully identified by his emblazoned t-shirt) wearing Tony-the-tiger spandex on his thin legs beneath cut-off jean shorts. He  flailed and gyrated as the spirit emanating from the Hillside stage moved him. And it was contagious. Over at the Creekside stage, when the Lee Boys from Miami played their “sacred steel” style of music, including a song with the repetitive lyric, “Dance with me, groove with me,” a 2-year-old boy complied. Even while he wore hearing protection, the groove got ahold of him, as he bounced and twisted. The lead singer couldn’t help noticing and asked his dad the boy’s name. “At Merlefest we call him Hollywood Hank!” his father shouted over the music.

At the same stage, when the band played “I Can Feel the Music,” a lean, gray-bearded man, unburdened by choreography or convention, danced with shaking-fire-ants-from-pants, unabashed glee.

Performers exhibited similar enthusiasm.When the band Trampled by Turtles took the stage, the Meatloafesque mandolin player’s long hair blew like a super model’s. The fiddle player sawed furiously as if his life depended on cutting through the instrument before the performance was over. They were Mannheim Steamroller meets Richard Simmons’ Bluegrass Aerobics. 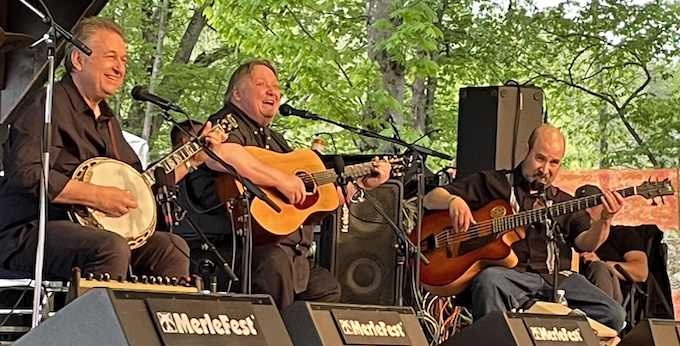 The Kruger Brothers at Merlefest. Photo by Donna Davis.

The The Kruger Brothers, originally from Switzerland and now Wilkes County residents, received a standing ovation before their set even began. Addressing the audience 15 minutes before showtime, Jens Kruger said, “You’ll have to act like you don’t see us. And we’ll pretend we don’t see you. We have to do a sound check. And then later you have to act very surprised, as if we just came on stage.” He explained that a German crew was there, filming a documentary. “So we have to behave,” he said. After exiting the stage and returning, the audience gave the band and the German crew a welcome rivaled only by the applause at the conclusion.

“When we heard Doc Watson and Merle play these songs, the music sounded like the deep woods of the North Carolina mountains,” Jens said. “Merlefest is all about Doc. The younger ones are learning from the older ones. The older ones benefit from the younger ones’ energy.”

Merlefest’s trademark is its “traditional plus” musical smorgasbord, which can be very eclectic.  Grammy award winning banjo player and composer Alison Brown played a piece she was commissioned to write as an accompaniment to a silent film. As she sat close to the pianist on stage and the 1902 silent film projected behind them, she played her banjo. And the audience forgot that the sound wasn’t coming from the sepia image of the banjo player on screen.

“I spent hours watching his fingers, trying to figure out what he might have been playing,” she said. “I call it ‘Foxy Grandpa.’”

In the evening, the sun slipped out the back screen door behind the Watson stage. But before it was hard-dark, the distant smell of chicken cooking hovered over the audience like a sensory canopy. The stage fog machine struggled to keep time, exhaling wafts of purple under the lights, like the smoke from I Dream of Jeannie‘s bottle.

“How about applause for my band, the Tonkin’ Honkies?” Josh Turner prompted the audience on Thursday night. Wearing a red and black buffalo plaid shirt and jeans, he offered up crowd pleasing songs in his distinctive low country boil voice that North Carolina natives could identify with, like “I’m From the Deep South.”

The Steel Wheels from the Shenandoah Valley also played on Thursday but by Sunday afternoon were good-naturedly blamed by festival goers for the weather that blew in. Huddled around a single vocal microphone, accompanied only by what suspiciously appeared to be a rain stick, they reprised the song they performed at their first Merlefest, “Rain in the Valley.” 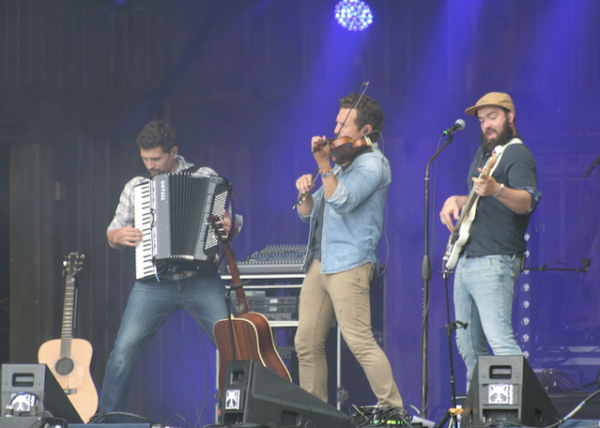 Describing themselves as “first generation sons of Ukrainian immigrants,” Scythian played “a Carpathian drinking song” while some audience members waved large sunflowers. “One time for the motherland / Two times for all of our friends / four times for the gypsy band!” And with an accordion player among the instrumentalists, a gypsy band required little imagination. 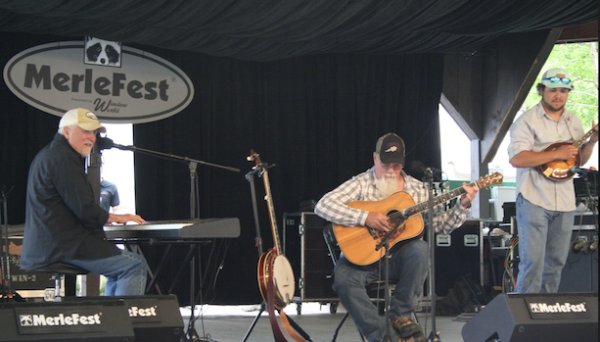 The Jeff Little Trio, from Boone, unconventionally combine piano with guitar and mandolin for their signature sound. “We’re the only band I know that goes from Dave Brubeck to Earl Scruggs in our set,” Little said. He talked about attending a small church where the same piano player had served for years. When she could no longer play, he was asked if he could fill it when he wasn’t traveling. He said, “Sure.” Then they asked, “Can you read music?” He replied, “Not enough to hurt my playing.”

But ask any of the 75-80,000 people who attended Merlefest to describe their experience and inevitably different stories emerge. Multiple acts are playing on different stages, forcing attendees to make impossible southern decisions, like choosing between banana pudding, warm out of the oven, and strawberry shortcake, with real whipped cream.

While many attended the festival for the sheer fun of it, others, like David Adams of SAW Family Creations, were there to meet the demand for mementos like redheaded strangers on green Christmas trees. The family business offered wooden ornaments “made with love in Pennsylvania” from recycled Christmas trees, and featured instantly recognizable musical icons. After Merlefest, perhaps their slogan will become, “If you see it, we saw it.”

One of the performers said he loved playing at Merlefest because people are there to hear the music. “We sure know you’re not here for the food,” I thought. But still, civic organizations deployed an army of volunteers for their major fundraiser of the year, serving up everything from the famous Boy Scout barbecued chicken to the “Elvis Dog.” Its ingredients are banana, bacon, and peanut butter. An actual hot dog can be added to make it deluxe for an extra dollar. 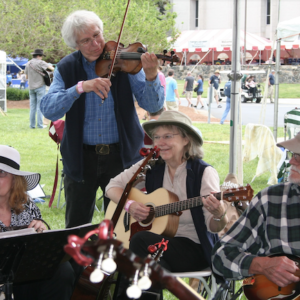 Helen and Wayne Bryant from Stokes found Merlefest to be the perfect way to celebrate their 40th wedding anniversary. They’ve been Merlefest faithfuls for a lot of years and returning to the familiar campground was like a family reunion, they said. Sylvia and David Bjorkman from Greenville gravitated to kindred spirits at the picking tents, playing with other musicians.

In the days leading up to Merlefest, fans posted on social media: “You get all 4 seasons in NC in April and May! But no matter; it’s the best time you’ll have all year.”

And clairvoyantly, a fan posted, “Nothing says Merlefest like that first flash of lightning.”

And that’s exactly how it played out on Sunday afternoon not long after Nitty Gritty Dirt Band played their iconic hit “Mr. Bojangles.” First the rain that the Steel Wheels conjured up on Thursday began in fat drops like musical notes falling from a heavenly score. Merlefestians took that in stride, nimbly activating their rain gear. But when an announcement was made that programming was suspended, and to “take cover,” the biggest concern voiced was not over safety, but whether that meant Emmylou Harris wouldn’t have a chance to play.

But after consulting schizophrenic cell phone weather apps that were less accurate than fuzzy worms at weather prediction, festival-goers were determined to stay the course. After about a 30 minute wait, fans were rewarded for their stalwart spirits when Emmylou and her Red Dirt Boys took the stage, opening with “Roses in the Snow.”

And while “Will the Circle Be Unbroken” tells of a better home a-waitin’, meanwhile, for most music lovers, Merlefest might be just enough mansion on the hillside stage. 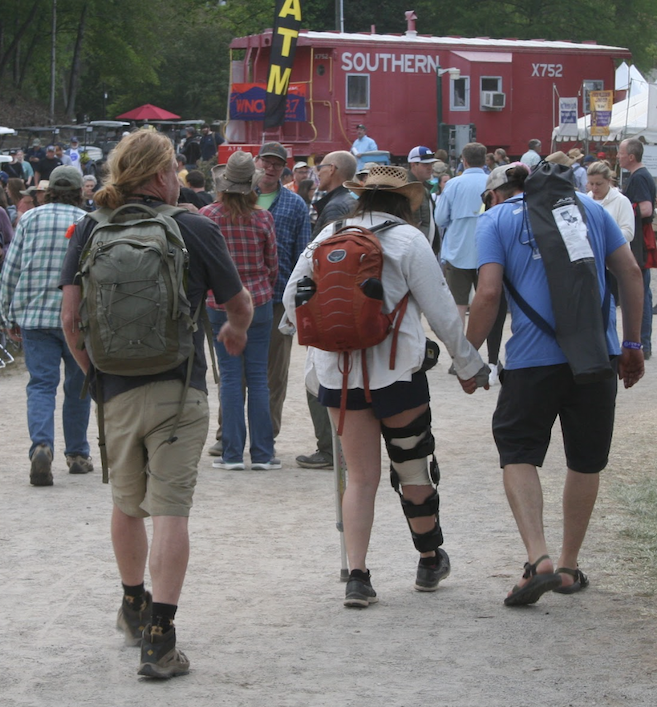 Originally published in the Daily Reflector May 7, 2022.