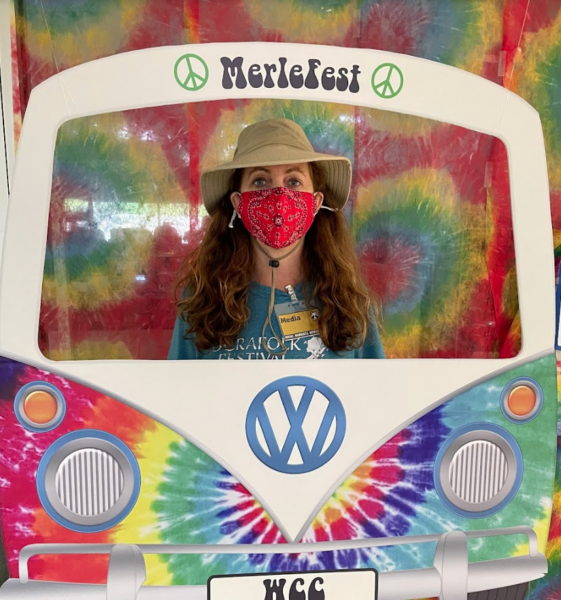 2021 Merlefest Takes Us There: The Beloved NC Festival Is Still Making Memories and Music 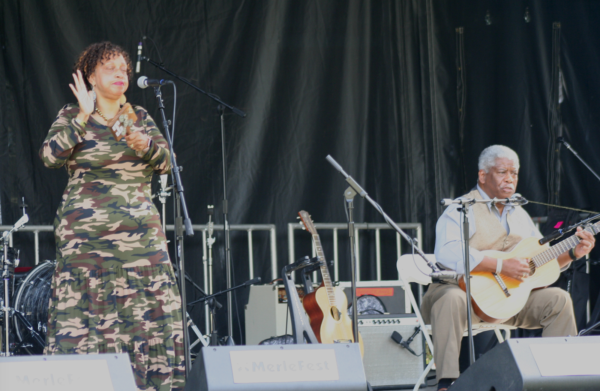 Merlefest is like Grandmama’s handmade quilt. The calico of a T. Michael Coleman story about Doc Watson is stitched with loving care to the vibrant fabric of the blues rock band Tedeschi Trucks. The bluegrass-esque comedy of the Cleverlys co-exists with the spirituals of Rev. Robert Jones. And that’s in adjacent squares to Roy Bookbinder’s blues. Which is next to the wide-open Celtic rock of Scythian, the showmanship of Shinyribs led by Burl Ives himself (or so it would seem from a distance) and the guitar virtuosity of Tommy Emmanuel. Pretty soon you’ve got a family heirloom of musical memories, however incongruent the individual patterns appear.

The “traditional plus” music festival conjures the fervor of an old-timey, all-day Pentecostal singing with dinner on the grounds. And that, blended with the county fair, where all the attractions are musical roller coasters. After being cancelled in 2020 and delayed from the usual April date in 2021 due to the pandemic, musicians and faithful festival-goers alike descended on the campus of Wilkes Community College last week like sailors on leave.

The event was founded in 1988 as a community college campus garden fundraiser and to memorialize Merle Watson, son of Doc Watson and renowned finger-picker in his own right, who was killed in a tractor accident. And over 33 years the annual festival in Wilkesboro has become as much a part of North Carolina’s cultural fabric as barbecue and Mayberry. 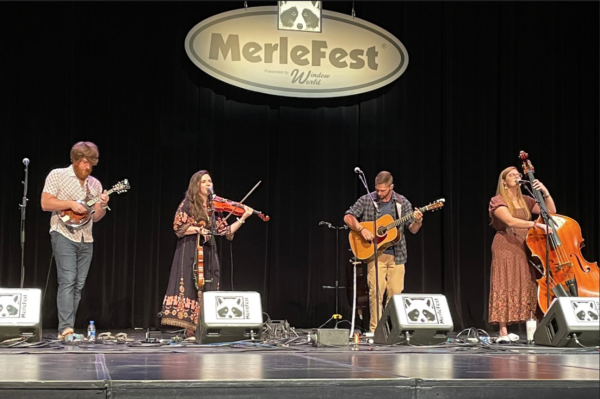 Since attendees make the pilgrimage to the unassuming town between Winston-Salem and Boone from all over, it’s not surprising that number includes folks from eastern North Carolina. Ron Harris (known for coordinating the City of Greenville’s Sunday in the Park series and performing in the local Six Pack Band) posted on social media: “My niece rocking the Dance tent at Merlefest! Go Barefoot Movement!” In addition to performing three sets with Barefoot Movement, his niece, Noah Wall, participated in the fan-favorite “Hillside Album Hour” with the Waybacks. This year’s set was a tribute to John Prine who died from COVID-19 in 2020.. Her solo vocals on “Angel from Montgomery” brought even precariously perched hillside spectators to their feet.

Since the festival is teeming with musical celebrities, spotting one from Greenville should not have been a great surprise. “Is that Bill Hunneke of Built for Comfort and the Donald Thompson Band?” I whisper to my husband with the same sense of excitement as seeing Ricky Skaggs in Raleigh a couple of years ago.

Andrew Small, who graduated from J.H. Rose High School before going on to bigger things, won first place in the Chris Austin songwriting contest in the bluegrass category for his original, “Yesterday’s Blues.”

Into the Fog, a band that has performed at local venues such as Pitt Street Brewing, the Whirligig, and the Turnage Theater, won the Merlefest band competition.

Even a volunteer working gate security spotted my purple and gold folding chair and asked if we were from East Carolina country. “I’m from Pitt County too,” he said. “Grifton.”

It’s not just about music, but community

Aside from the entertainment value of the festival, the economic impact to the area is immediately apparent. Every scout troop, church, and non-profit for miles has been mobilized in a civilian brigade to sell food, drive shuttle buses, and don bright volunteer vests. 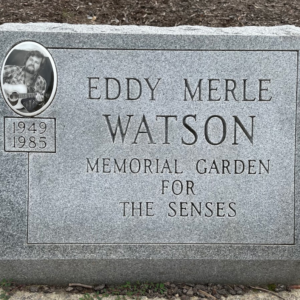 The community college shows evidence of the funding stream. The grounds and facilities are immaculate, with walking paths, attractive buildings, and of course the Eddy Merle Watson Garden for the Senses that started it all. Doc and Merle Watson’s images are embossed in a brick wall, along with instruments associated with traditional music. The visually impaired can have the tactile experience of feeling the shape and crannies of instruments and then read each name in Braille above it.

To say the event is like a 3 ring circus is an understatement, with 13 stages and tents the size of gymnasiums labeled “Food,” “Shade,” “Shoppes” and more.

The faces of the festival

“It’s so good to see the same people year after year,” a free-spirited woman says conversationally as we’re walking in the same direction. “I’m like….I don’t know your name but I remember dancing with you.”

A grizzled man of some years wearing a “Dark Side of the Moon” shirt sprawls awkwardly on the grass next to my chair. A camera weighs heavy around his neck. In between songs while he is clapping enthusiastically he says aloud to anyone listening, “I waited 5 years to be here!”

I watch with fascination as a volunteer at the Watson stage named Charlie is stopping men and asking if he can take a selfie with them. “I want to show my wife how many people here look just like me,” he says, adding that he’s taken 200 photos already. And then he asks my husband the same thing. The criteria is apparently gray haired men with beards. And he’s right. While certainly young people and women are present, the demographics weigh heavily in Charlie’s favor.

An entertainer dressed in a black kilt, David Hurt, strolls around juggling and spinning objects. He’s been coming to Merlefest for 30 years. Like a magnet, he attracts kindred spirits with hula hoops and streamers.

“What’s your favorite festival?” I ask a man from Pennsylvania with cropped gray hair and a navy ball cap who has pivoted in his seat to be friendly.

“This one, he says. Then he adds. “I have a horse business. People ask me what’s my favorite horse. I say, ‘The one I’m riding.” 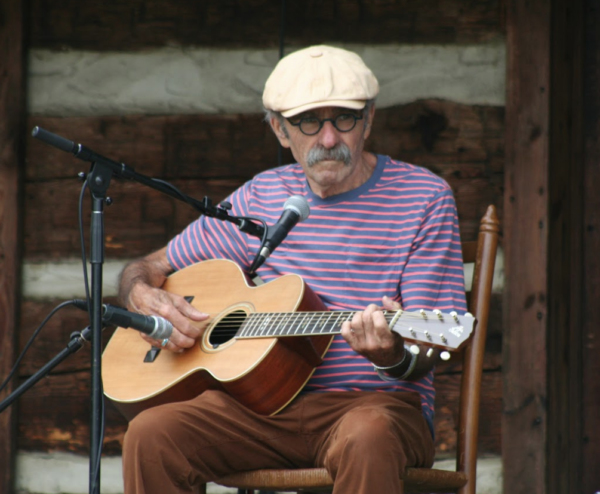 Roy Bookbinder sits with guitar in a stick wood chair and explains that “old time acoustic blues had a lot to do with the beginning of bluegrass.” Introducing “New Age Ways,” he says, “This is one I wrote for my first wife, may she rest in peace with her new husband.”

Before playing guitar instrumental “The Duke,” Tommy Emmanuel says, “I imagined I got the job writing the theme song for a new John Wayne film, and it was set in Ireland.”

In one of many references by musicians to their joy in being able to perform before live audiences again, mandolinist Sam Bush says, “If any of us who play music for a living took it for granted before, buddy, we don’t now!”

As the sun starts to set in the evening, the air is slightly cool and charged with the excitement of fall…of hayrides and football. And live music.

Barefoot Movement plays on the Cabin stage while the empty Watson stage nearby watches with gaping mouth. The sky frames the structure in an other-worldly blue, silhouetting tall trees that appear to sprout from the rooftop like a canopy.

The waxing gibbous moon peeks briefly from behind clouds as if to say, “What’s going on down there?”

With 4 days jam packed with music, the sights and sounds of Merlefest jockey for attention. But the ones that resonate most are not necessarily headliners, but those associated with Arthel “Doc” and Eddy Merle Watson.

After playing an elaborate classical-style banjo-centric instrumental, Jens Kruger of the Kruger Brothers says, “Thank you. It was a lot of notes. All of them were more or less necessary.”  Introducing a medley of old-time songs, he randomly mentions, as if the memories are inextricably entwined, “I would be at Doc’s home and Rosa Lee would make tomato sandwiches.” 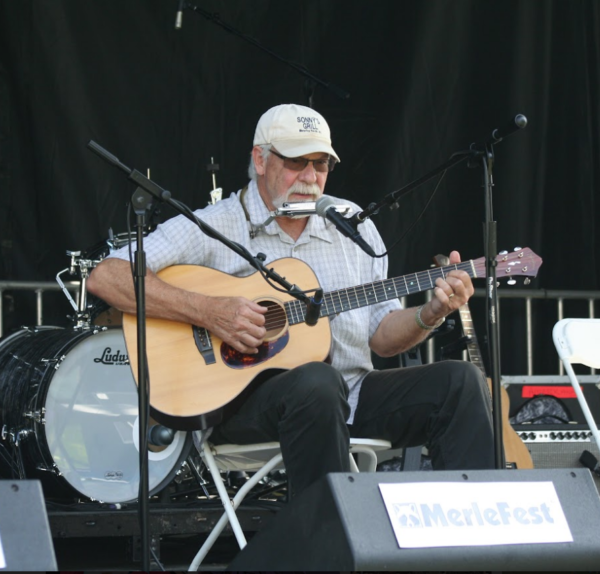 Between songs Charles Welch tells a story about walking along with Doc and encountering a street musician playing “On Top of Old Smokey.” Though blind, Doc knew where every bill in his wallet was, and he reached under the flap for a larger one and put it in the musician’s case. The guy said, “You’re Doc Watson!”  Doc replied. “Yeah, what’s left of me, son,” and he complimented the musician on his version of the song.

When longtime NC musicians Sheila Kay Adams and Carol Rifkin play a set with banjo and violin, Rifkin says, “When Sheila was learning love songs I was learning depression era songs about alcohol.” Then Rifkin puts down her fiddle and stands up to demonstrate Doc’s way of “telling stories with his feet” as Adams plays banjo. “Walk the dog,” she says while making a shuffling movement with her feet. “Shine the shoes….then swing on the barnyard gate…. hear a horse galloping…” Her steps change with each story twist and the audience loses themselves in every clippety clop.

T. Michael Coleman (Doc’s longtime bass player), pauses during a set to explain, “About the death of Merle and Doc…I wanted to say something about it. It took me years to write the song ‘Sitting in the middle.’” Even newcomers from eastern Carolina feel a pang and flutter upon hearing the lyrics: “I had the best seat in the world, sitting in the middle of Arthel and Eddy Merle.”

On Sunday afternoon, a few hours before Merlefest closes, 82-year-old Mavis Staples takes the stage. “We’ve come to bring you some joy, happiness, and positive vibrations.” Her song choices from turbulent times echo the uncertainties of the present, with “Stop Children, What’s That Sound?” “Take the Load Off, Annie,” and then “Respect Yourself,” where she is joined by Melissa Etheridge.

“My family…the Staples family singers…. have been taking you there for 74 years!” Staples shouts in the microphone like a tent revival preacher. “Now it’s time for you to take us there.”  When she gets to the line of the 1972 #1 Staples Family hit about a place where “ain’t nobody worried,” an ocean of humanity shout-sings, “I’ll take you there!”

And with her help, once again Merlefest does the same. 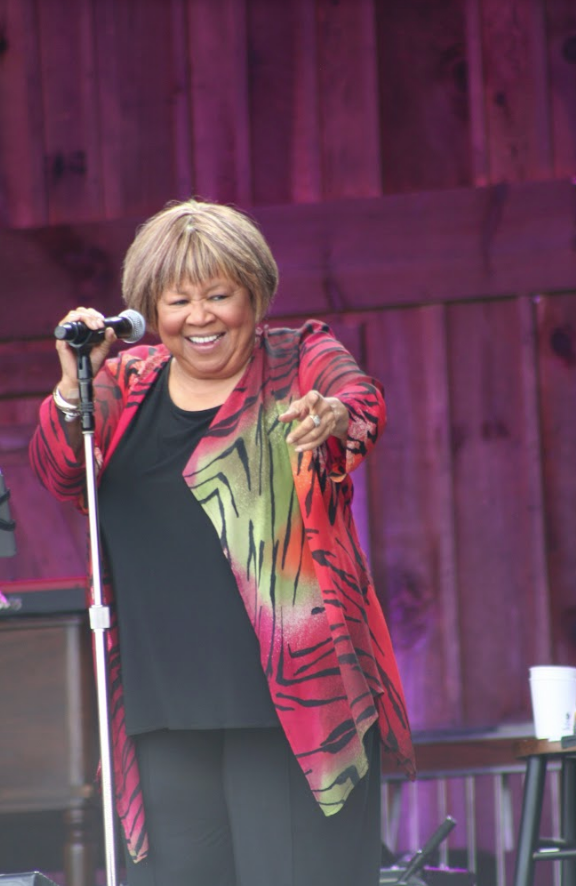 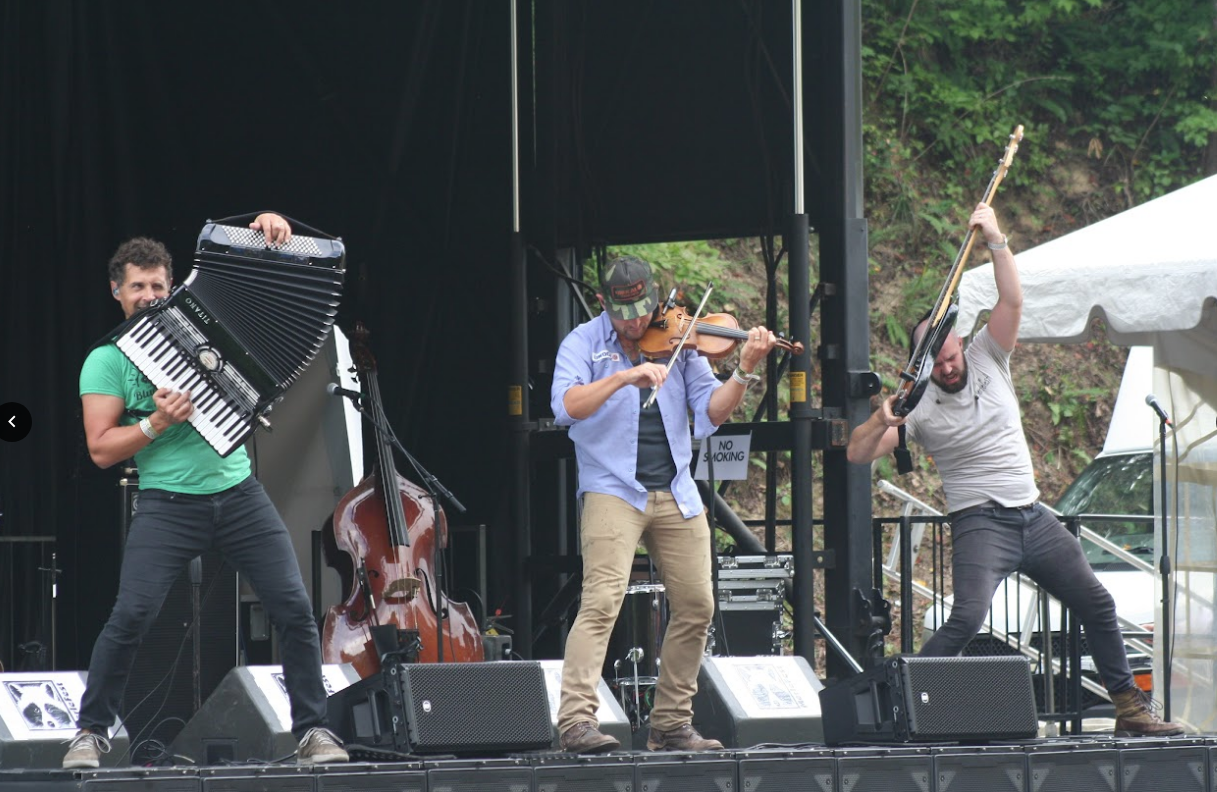