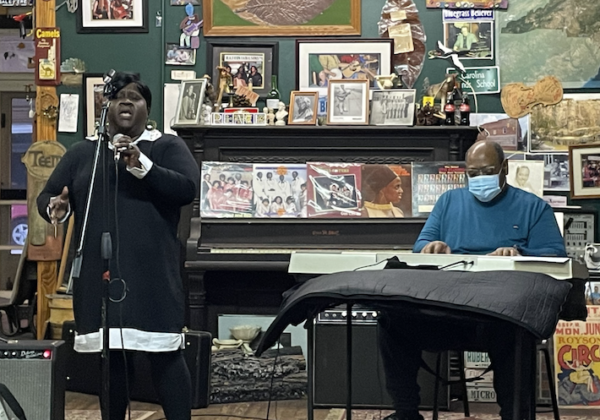 Music is instrumental in bringing unity

Music is instrumental in bringing unity 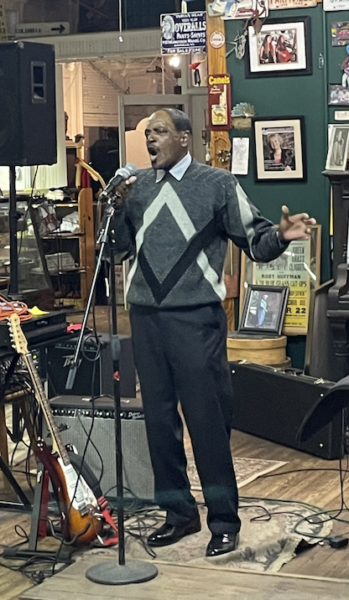 Former Fountain mayor Shirley Mitchell and County Commissioner Alex Albright introduced a program called “A Taste of Soul” on Feb. 19 at R.A. Fountain General Store. It’s a Black History program that Mitchell said has been held for 16 years, originally in the Fountain library. It’s part history lesson and an opportunity for local politicians to meet-and-greet. The highlights, arguably, are the food and music for the soul.

The incongruity of the historical charm and inequity surrounding the venue was not lost on participants. “In the 1960s we couldn’t have been sitting in this room together, much less eating together,” Fountain Commissioner Steve Williams said in his remarks.

“It’s good we can come in the front door, and not the back door,” Mitchell said. “A lot of these buildings, we used to have to do that.”

The music began with the Negro National Anthem [“Lift Every Voice”], with some surrounding history of the song explained by Mitchell. Lyrics were handed out and attendees encouraged to sing along. It included the words, “Sing a song full of hope that the present has brought us.”

Seating in the store, appropriately enough, includes a good number of old church pews, comfortably padded with cushions. And if furniture could talk, the pews would surely have been shouting “Hallelujah!” as the music took the receptive audience to church.

Michelle Edwards launched confidently into “Break Every Chain,” with lyrics assuring “There is power in the name of Jesus to break every chain.” Her voice had the sort of strength that provides its own amplification, coming from deep inside. Vocal coaches might call it “singing from the diaphragm” but listeners may figure it has more to do with the heart. Keyboardist Dennis Patrick followed along with remarkable agility, hinting that he could probably play anything any situation demanded.

“There were times when we couldn’t sing,” Edwards said between songs. “I need for y’all to act like you’re free.”

Edwards’ next song was simply titled, “God is good.” “He healed my every sickness and brought me out of darkness,” she sang. Sitting on the front row, Mitchell started a syncopated clapping and soon others joined in. 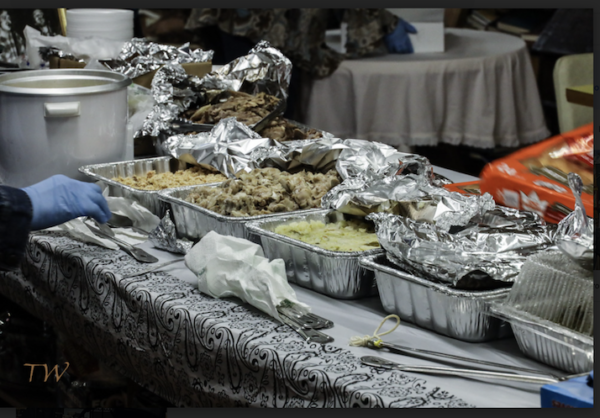 Between speakers and singers, word spread that the fried chicken had arrived. Attendees lined up at the back of the store to be served butter beans, sweet potatoes, cabbage, black eyed peas, pigs feet, chicken neck bones, and fried chicken. Sweet tea and an assortment of cakes and cupcakes were also offered.

Even as some sat at small tables in the back while others balanced plates on laps, lanky Roland Suggs took the stage. Serving as his own sound man, he started backing tracks for “Solid Rock” and then “One Hour.” The songs were from his CD Jesus is Patiently Waiting. Suggs was clearly in his element, and he took the audience with him. His rhythmic, Motown-meets-Messiah style conjured mental associations between “60 Minute Man” and his time-titled song that was really talking about the hour Jesus prayed at the Garden of Gethsemane. Suggs said something along the lines of “I guess that’s it,” to indicate he was finished singing, but the audience would have none of it and began shouting song titles.

The music kicked into another gear, and no track was required, when Suggs picked up his electric guitar and accompanied himself on Luther Barnes’ “God’s Grace.” Even the pews started rocking a little when a natural choir came to life among the congregated, echoing the words, “God’s Grace.”

Suggs’ red-hatted wife, Hattie, went up to the stage to whisper to him. When she sat down, he began singing “The Tide of Life.” It might have been a song title, a special favorite, she heard shouted out along with the others.

It’s a song about mortality and salvation. As the song progressed, Suggs started repeating the metaphor of the ship, rhythmically pausing before singing it again, “Ship!” and then again “Ship!” By this time the keyboard player had joined in to rock the boat. Suggs’ voice rose and fell like the waves, and he took everyone in the audience on the boat with him.

And one by one, warmed with a belly full of cabbage, sweet potatoes, and soulful music, the assembled locals all exited the same way they arrived: through the front of the building, respectfully, not letting the screen door slam behind them.

Originally written for publication by the Daily Reflector, February 19, 2022. 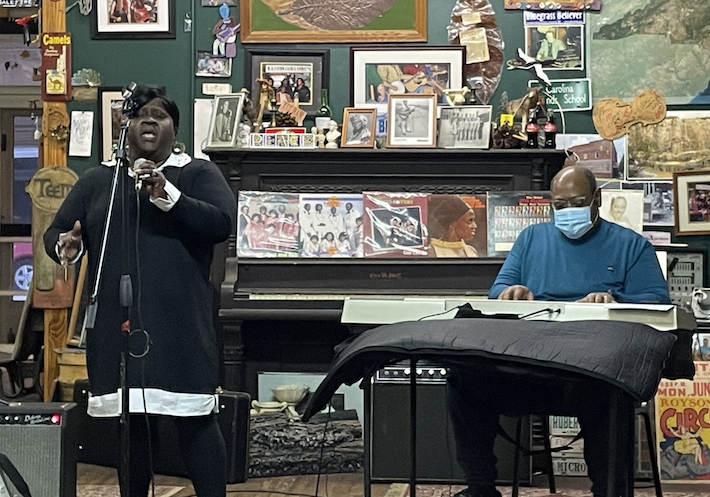