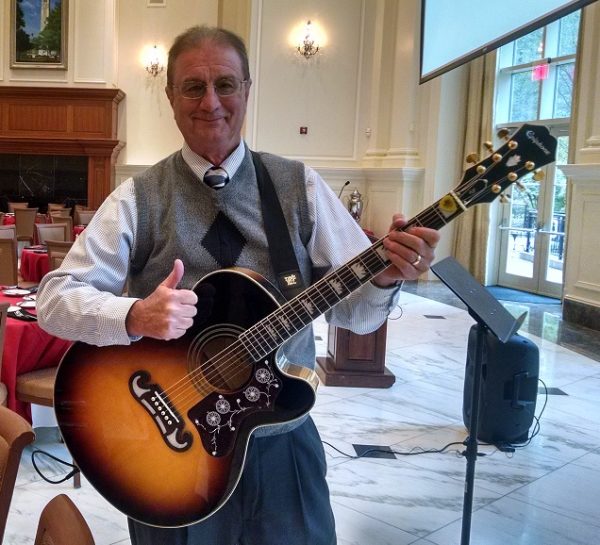 Locals may recognize Willie Nelms first as the Director Emeritus of Sheppard Memorial Library, but anyone lucky enough to see him perform might describe him as “rockabilly, head to toe.” That’s actually the name of one of the lectures/performances he gives all over the state as part of the North Carolina Humanities Council’s Road Scholars Program. Another is “America’s Music Down to its Roots.”

And his roots run deep in music. He grew up on traditional country, southern gospel, and bluegrass, as well as rock and roll and r&b in the ’50s and ’60s…mostly on the radio. While his parents weren’t musicians, they loved music and took the family to musical shows. Growing up in Suffolk, Virginia, he often went to shows at large venues in nearby Norfolk and Virginia Beach. “I got a chance to see the first generation of bluegrass, country, and other style musicians from Patsy Cline to Johnny Cash to Bill Monroe to Chuck Berry.”

He started playing in the mid ’60s with the British Rock and Roll invasion. “Every teenage boy was trying to learn to play the guitar then. After getting somewhat proficient on guitar, I found my way to the electric bass because I seemed to have a natural ‘ear’ for the low tones of the instrument.” Plus, bands needed bass players.

And apparently that hasn’t changed much. As a bassist (both upright and electric bass) he’s in demand. He’s played with the Tar River Boys, “eastern North Carolina’s original Bluegrass Boy Band” since 1996. The group formed in the early ’70s and played all over eastern North Carolina. He was also in Greenville Grass, a spinoff from the Tar River Boys, with banjoist Buddy Zincone. 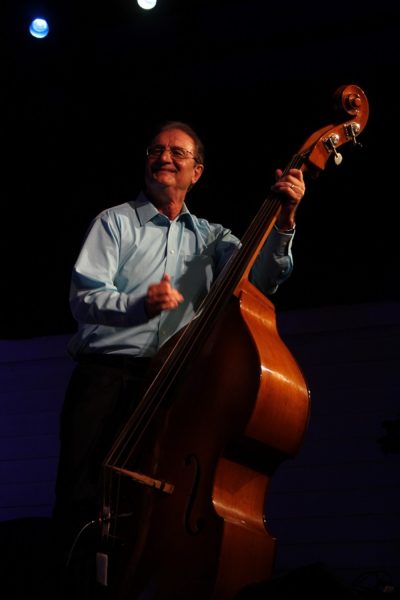 He performs regularly with Steve Creech’s jazz group that plays at CPW’s restaurant and Park Avenue South, that plays old standards, jazz, R&B and timeless rock and roll, Nelms shares. They can be seen at Nino’s or the Pub at Kasturi in Greenville, and Marabella’s in Washington. And he plays as needed with a variety of other musicians, ranging from Celtic to ’50s and ’60s rock and roll.

Over the years he learned to play a lot of different styles…whatever was needed for the gig. “I even played in a stage production of the musical Oklahoma!”

Self-taught, he enjoys the challenge of learning new styles. “My personal favorite is slap bass, similar to rockabilly players of the ’50s. It looks and feels cool and is fun to play.” Versatility is key, he explains, to getting work as a bass player. “Almost every kind of music needs a bass, so if you can play the needed style, you will get the gigs.”

Some may wonder how it feels to play an instrument that’s as large as another person. “The physicality of the upright bass has never been a challenge for me. It requires large movements of the hands and arms as opposed to small string instruments, but I like that physicality.”

Even though it’s bigger in size than other instruments, it’s not that heavy, just awkward in shape. A spacious vehicle is critical, Nelms explains. Some players are put off by the lack of frets on the upright, but you learn where the needed tones are located. “I actually play and prefer a fretless to a fretted electric bass when I play electric bass.”

Nelms’ favorite song to perform at present is “Take Me Back Home in My Memories,” a song he wrote and produced with a video that can be found on Youtube. The video includes images of his home where he grew up as well as some Greenville scenes. He also enjoys playing bass and singing “Stand by Me” because of its iconic opening bass riff that always brings an expression of recognition by listeners.

Over the past few years Nelms has found himself so busy playing out in the public that he has not had time to write new songs. That’s been one upside to the imposed confinement of the pandemic: he has been actively writing new songs and expects to produce a couple of projects with this new music.

Also, he’s rediscovered the joys of front porch playing. And the runners, cyclists and walkers in his neighborhood sometimes stop and listen. “It’s nice to be able to provide some enjoyment to them.” Still, he’s looking forward to going back to all the places where he played before.

As an avid reader with a 36 year career in the public library system, is there a book about musicians that he would recommend? While it’s difficult to narrow it down, he confesses, a personal favorite of his is Will You Miss Me When I’m Gone? The Carter Family & Their Legacy in American Music, by Mark Zwonitzer.

Perchance the book that influenced him to play the upright bass was the Bible. Psalms 112:2 declares “…the generation of the upright shall be blessed.”

And since Willie Nelms is a library-card-carrying book man, maybe we should call him “Rockabilly, cover to cover.”