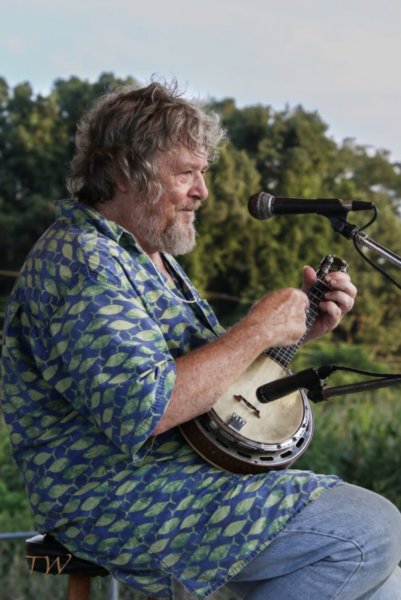 Even as I type the first words that come to mind for a title when recounting that hot summer evening concert, it strikes me as unoriginal. But if you’re going to have a sobriquet, choose one that inspires pedestrian storytellers to hear thunder rolling from your viscera and see sparks flying from your fingertips. And for all of August’s fiery sun a poundin’ on the park in Grimesland on Friday the 13th, no less, Lightnin’ played up a storm. 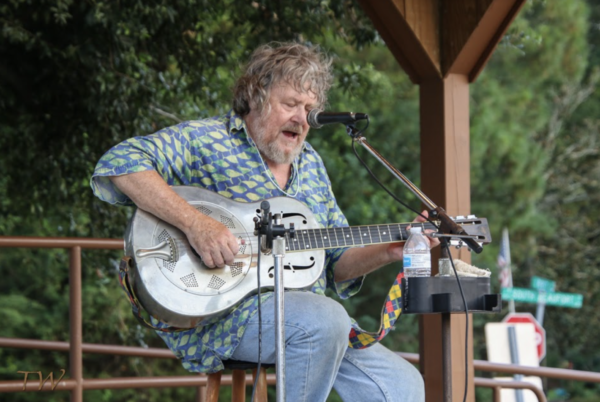 As we arrived, all flustered, thinking we were late, there was Lightnin’ himself, in all of his be-sandaled, fish-fashion glory, strolling towards the taco truck in no particular hurry. We thought he would have been two songs into his set by now. I’d gone straight from work to a band practice, and then cut out of it early to get there almost on time.

Fortunately the band mates, all longtime fans of Lightnin’, opted to go too. They remembered a time they were in Washington state and were surprised to hear Lightnin’ Wells’ name announced on the loudspeaker. He was there for an annual festival. We figured either it’s a small world or Lightnin’s a big deal.

They teased, “If we drive all the way out there and it was cancelled because of the heat…” Well, the threat was a veiled one. I would never know the consequences.

Upon arrival he advised us that the time had been adjusted to 6:30 p.m. and recommended the taco truck.

We settled our chairs as close to the covered stage as possible, while still in a shadow that offered a bit of reprieve from the hot sun. Playground equipment flanked the stage on one side and the back, but it doesn’t take children in North Carolina long to learn to avoid slides in direct August sunlight. The shelter serving as a stage was emblazoned with the Grimesland seal, featuring tobacco leaves and an incorporation date of 1893. 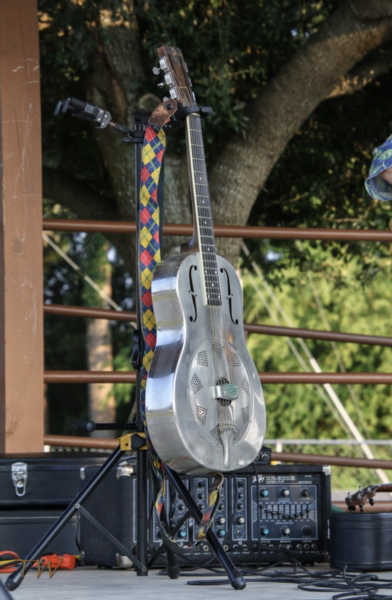 Lightnin’ demonstrated remarkable trust in local concert-goers by leaving his instruments on display…a black guitar with a white pick-guard, like a palomino pony or tuxedo cat. A resonator guitar as silver as the Tin Man, but with more heart. A tiny ukulele banjo that looked as if it was used on the set of “Honey I Shrunk the Kids,” and less obvious from where I was sitting, a set of harmonicas.

“Make me a pallet on your floor…” Lightnin’ sang. The lyric found itself around so often that I whispered to my husband, “Blues songs get their money’s worth out of their lyrics.” I looked it up later and found it was a song from the end of the 19th century, possibly originating in New Orleans.

His next number included a lot of attributes of the woman he loved. Including the fact that she’s got a mole beneath her nose. I was provoked to write that down.

“When was the last time you heard some yodeling?”

My husband answered the rhetorical question, though just to me. “Roy Rogers, yesterday.” I’d had Sirius radio tuned to Willie’s Roadhouse lately.

But even if we’d heard Roy, that in no way diminished the pleasure of hearing Lightnin’ yodel. That, alone, was worth the trek down 33 east.

The jammers once had someone request that we sing “Big Rock Candy Mountain.” At the time we stared back a little blankly and said, “How about ‘Gospel Ship’?” But Lightnin’s trip up the rocky mountain was especially sweet, demonstrating remarkable whistling finesse.

In “Freight Train Boogie,” he’ played guitar and harmonica and sounded convincing as the subject locomotive. “Casey Jones was a mighty man…” he began. We learn that it was a Delmore Brothers tune. Recorded in 1946, some consider it the first rock and roll song.

Tom Whelan, the photographer from Washington, jockeyed for position, giving the performance in Grimesland Community Park the paparazzo attention of Madison Square Garden. 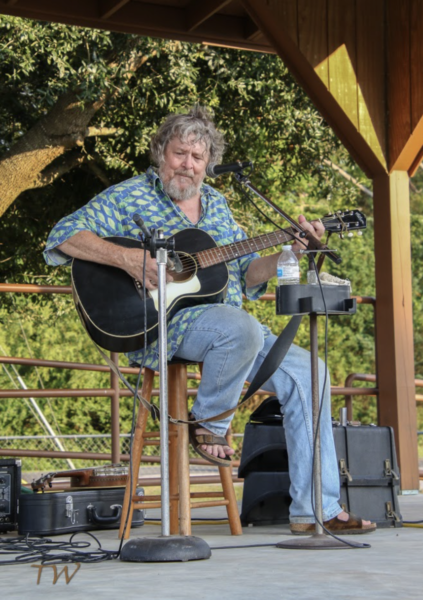 Lightnin’ introduced the “San Francisco Bay Blues” by saying it was recorded by a one-man band, Jesse Fuller, who played 12 string guitar, drums with his foot and bass with his toe. Perhaps channeling his energy, Lightnin’ freed himself from sandal bondage for the remainder of the set.

He played “Alabama Bound” on his ukulele banjo, and “Big Town,” about a “place where the sinners go.” Following that, he introduced a song inspired by how kids used to court in the 1920s, “Paddlin’ Madeline Home.”

The resonator guitar had its moment to shine in the bright sunlight during Blind Boy Fuller’s song, “So Sweet.”

“I started playing when I was pretty young,” Lightnin’ mentioned in passing, between songs, “going on 50 years.” He said he’s been included in the NC Folk Festival in Greensboro this September. At one point he asked the audience if they had any requests. “But it’s got to be old,” he reminded us. “I don’t play new songs.”

The remaining songs caused me to write down disjointed snippets I found irresistibly intriguing, including, “I want to be your candy man, won’t you be my salty dog,” “Any fish will bite if you’ve got good bait,” and “I’m a rattlesnake daddy and I’ll rattle whenever I please…When you hear me rattling, you better get on your knees….”

I gazed up at the water tower overshadowing us like rural Grimesland’s statue of liberty, overthinking the lyrics’ meanings. 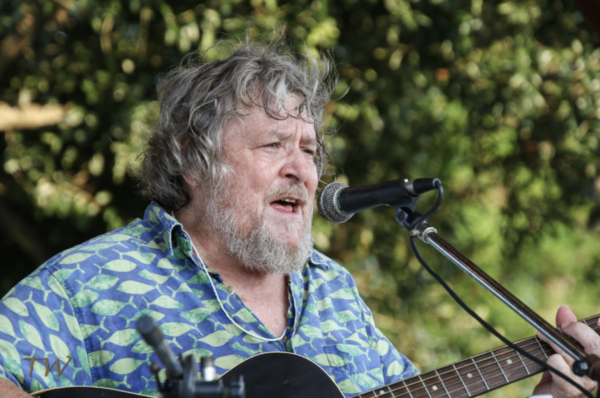 Fortunately, about that time Lightnin’ took us to church by launching into some gospel numbers, including “Life is Like a Mountain Railroad,” and the optimistic, “Keep on the Sunnyside.”

The time was approaching 8 p.m. and Lightnin’ said, “It’s nice out now…I could play all night and now I’ve got to quit.” My husband, the passive attendee who was there because he was with me, said, “No you don’t! What are you going to play for your encore?” Of course he said it just loud enough for me to hear, but what I heard was, Lightnin’ struck again. 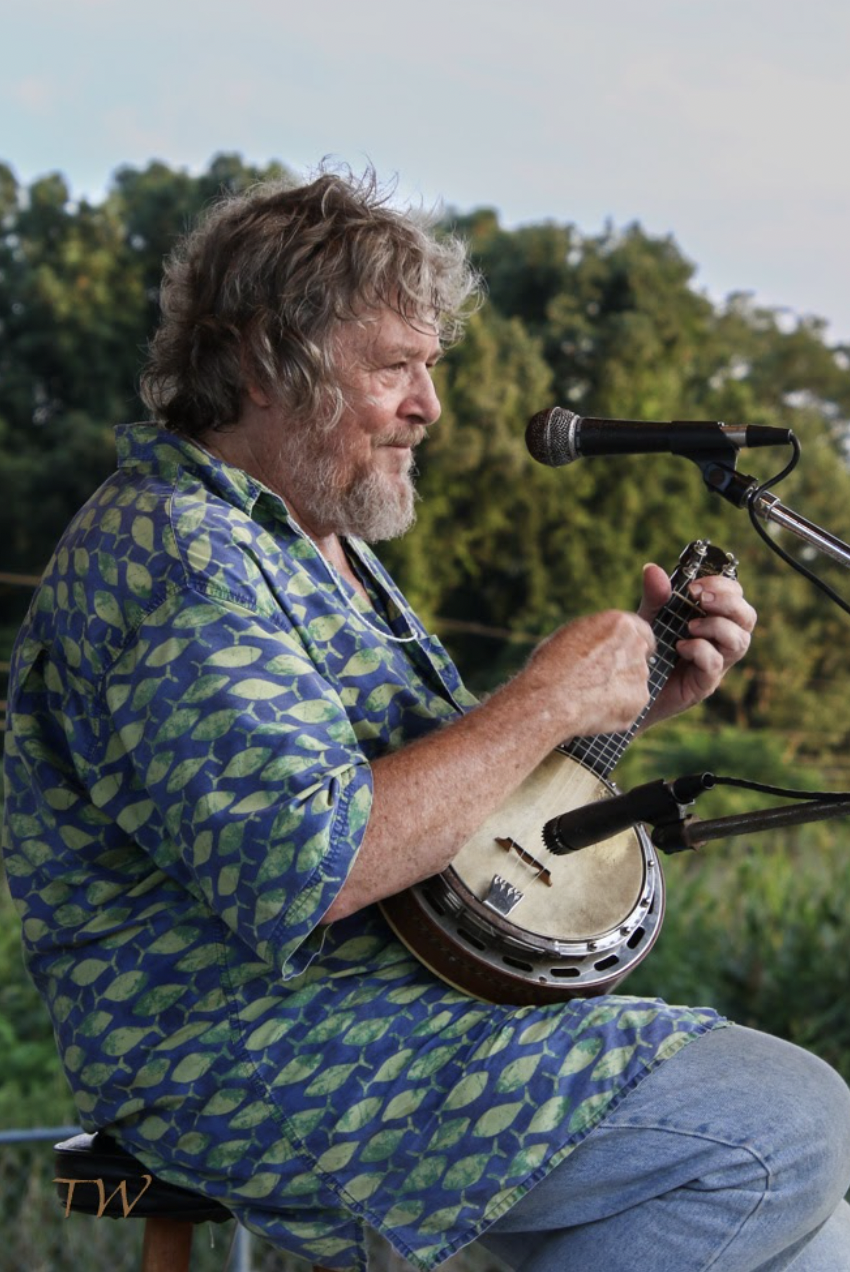