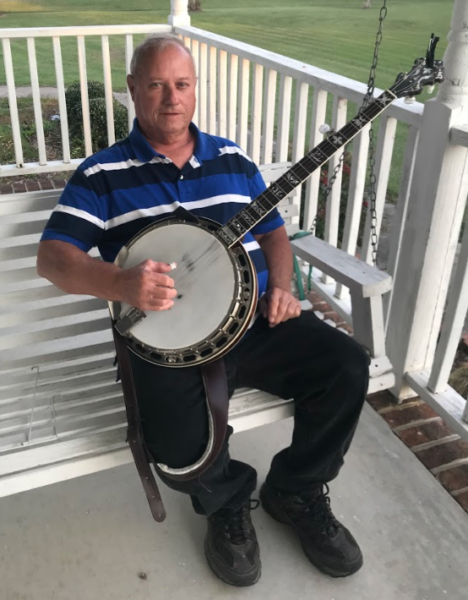 What’s the difference between a banjo and a Harley-Davidson motorcycle?

Answer: You can tune a Harley.

Banjos and accordions take the brunt of comic relief for the rest of the instrument world. And it’s all in good fun…but surely doesn’t apply to a fine banjo player like Pitt County’s own Junior Buck, who is probably reading this and saying “What? I don’t get it.” But of course his banjo is in tune!

Junior Buck (I didn’t learn his real name was “William” until years after I met him) carefully removes his prized instrument from its case, settles onto a porch swing, and dons finger picks on his thumb and the first two fingers of his right hand. He launches into an avalanche of effortless notes, playing “Earl Scruggs style.”

His instrument of choice these days is a special 50th anniversary Little Roy Lewis banjo. Built by Frank Neat to celebrate Little Roy Lewis’ 50 years as an entertainer, it is described as having a rosewood fingerboard featuring flying eagle inlays. “50th Anniv” is emblazoned on the 7th fret and “Little Roy”on the 21st.

“Little Roy is my hero,” Buck quickly says. “He’s one of the best banjo pickers in the world.”

But he had another hero in his own family who influenced him musically. The Father of Bluegrass, Bill Monroe, famously had a fiddle-playing Uncle Pen and Buck had a banjo picking Uncle Mayhew.

“My uncle played the banjo when I was a young boy in the ’50’s. But I didn’t start playing then. It was later, when I was about 19, and I started with the guitar,” Buck explains. He pronounces the instrument in the distinctive manner that eastern North Carolinian natives can appreciate: “gee-tar,” with an emphasis on the first syllable.

“In the ’60’s my uncle used to play for a preacher in Washington and my sister sang with them. There was a talent contest in Chocowinity and they won it,” Buck remembers. “That was the beginning.”

But it was a revival that caused Buck to convert. That is, from guitar to banjo.

“Kenneth Dixon was preaching revival and playing banjo and that’s what got me started. He showed me some chords. I’d go to his house, we’d sit down, and he’d help me some.”

Some of the preacher’s favorite songs to play are Junior Buck’s favorites now: In the Sweet By and By, Where the Soul Never Dies, When the Saints Go Marching In, What a Friend We Have in Jesus.

Buck explains that over the years he went through some periods when he just didn’t play. “I went one time for 10 years and never picked it up, but for the last 25 or 30 years, I’ve been pretty consistent playing.” 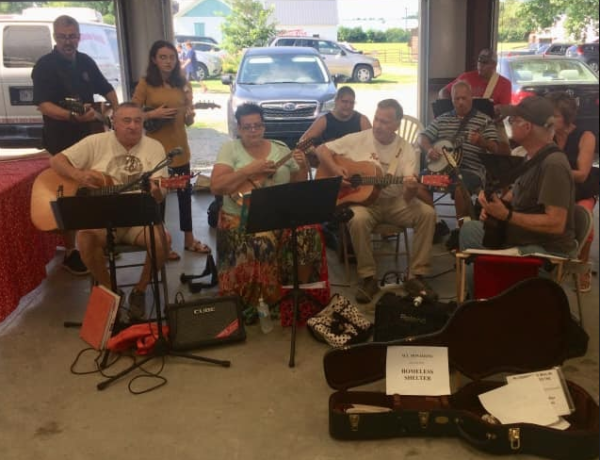 And while you won’t likely find a YouTube video of Junior Buck, or see him playing at an open mic, musicians have a way of gravitating to one another. It doesn’t take social media to get the word out about a good picker. He often gets pulled into playing with various groups including the Rose Hill Freewill Baptist bluegrass group in Winterville, and the St. James Jammers in Greenville. Pre-pandemic he could be seen on Saturday mornings playing with the Jammers at the Leroy James Farmers Market, or at various nursing homes.

Like Martin and Lewis, Laurel and Hardy, I suppose the guitar is needed to play the straight chords and steady rhythm so the fancy banjo picker can shine, weaving a tapestry of embellishing notes around the basic chord structure. And when they do play together, his favorite phrase to say is “You can play it a little bit faster.”

Sometimes he plays in a barn behind the house of his friend, Jimmy Chandler, where musicians from the neighborhood get together to strum and sing. A sign is affixed to the door with, “Gospel Music Only. No drugs or alcohol allowed.”

Buck says, “Now it won’t matter if you make a little mistake here. Nobody will care…they just love to play.”

The musicians sit in a horseshoe style while a modest audience of friends and family members listen appreciatively. They take turns deciding on a song and there is no sheet music involved. These are old time gospel songs played by ear that everyone has known their whole lives. Some songs are in the vein of “Farther Along,” sort of mournful, pleading songs of repentance. Only rarely do the musicians announce the song before starting to play. Occasionally they will call out the key, but more often than not it is in G. The order of the night is to just take off and try to hang on.

The pandemic has put a stop to a lot of public playing, at least for Buck. “You can’t get together with people like you used to. It’s too risky taking a chance,” he explains.

Bluegrass duo the Gibson Brothers sing a song, “They Called it Music,” with lyrics [co-written by Joe Newberry and Eric Gibson] that aptly sum up the spirit of Junior Buck’s music in times like this:

“They called it music / In the church house, in the fields / It was honest, it was simple / And it helped the hard times heal.”