Dixon, from Shreveport, Louisiana, earned the first Masters degree in Music Education awarded from ECU, in 1976. A classically trained violinist, she became an Irish fiddler and then founder and director of Twisted Knot. She also performs with the St. James Jammers, a group of string musicians who play bluegrass, folk, and gospel music “most every Monday night” at St. James United Methodist Church in Greenville.

North Carolina native Rebecca Hall is the band’s technician. She is also a singer-songwriter, composer and solo performer who has recorded one CD of original music and another of traditional church hymns. She is the choir director at Airy Grove Christian Church in Kinston.

Jim Joseph, from New York City, started playing guitar at 20 and joined a folk band that won second place in an Air Force talent contest in Germany in 1969. He also plays with the St. James Jammers and is a certified sign language interpreter.

Sylvia Bjorkman, from Fairmont, NC, attended UNC-G, UNC-Chapel Hill and ECU, earning degrees in education and psychology. The musical family in which she grew up consisted of a church organist, a composer, a cellist, and several violinists. She also plays with the St. James Jammers, St. Paul’s Recorder Ensemble and the David and Sylvia Duo.

Catherine Walker, from London, is a professor in ECU’s School of Art and Design. She began playing recorder in 1979 and performed at the Rathskeller in Greenville soon after arriving in the U.S. in 1980. Now, after a hiatus of 30 years, she is playing recorder again.

Goldsboro native Donna Davis works for Pitt County in technology support and writes about regional musicians and shows for the Daily Reflector. 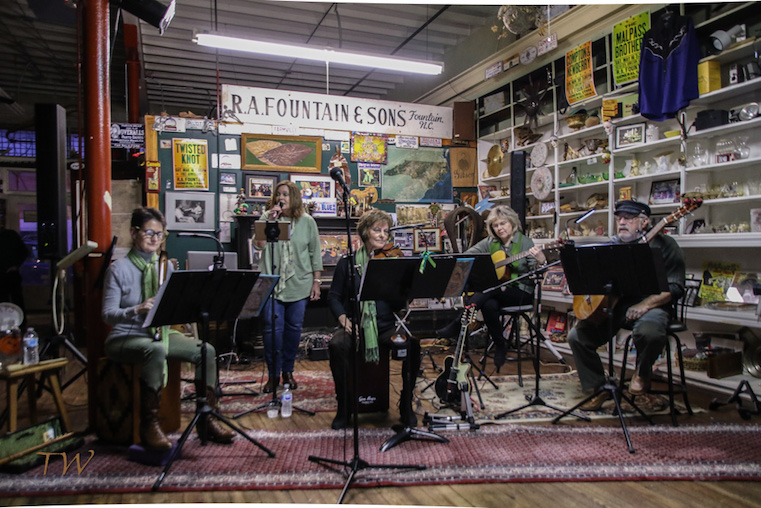