original and traditional bluegrass from the foothills of NC

The New High Country Boys began in the early ’70s as a showcase for the music of the band’s founder, Roy McMillan. Before he passed, Roy asked his bandmates to carry on his original style of original and tradtional North Carolina music. Brad Wood adds: “And we are gonna hold true to his vision as long as we are able. ” This is the New High Country Boys’ first RAF appearance.

Brad Wood, on guitar, mandolin and vocals, is from Surry County. He has performed at RAF with Harvest Wind and Mountain Rain.

Jeff Michael, on fiddle, guitar, mandolin, old-time banjo and vocals, was born in Iredell County and grew up in Wilkes County. He previously played with Big Country Bluegrass.

Ted Nixon, on 5 string banjo, was born in Elkin and grew up in Dobson. He has also played in the Hard Times Band, Avery Hester and Crosscreek, and, with his wife, Janice (pictured below), Breaking it Down. 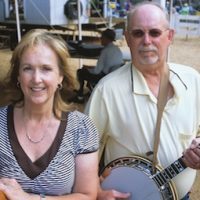 Ryan Dunn, on bass fiddle and harmony vocals, grew up in the Winston-Salem area, singing in church and listening to bluegrass: “In my freshmen year of high school, I started playing the bass with some friends who loved bluegrass as much as I did.” He was previously with the Harvest Ridge Bluegrass Band.

Here’s Richard Thompson’s tribute to Roy McMillan (pictured below), as published in Bluegrass Today on July 17, 2014: 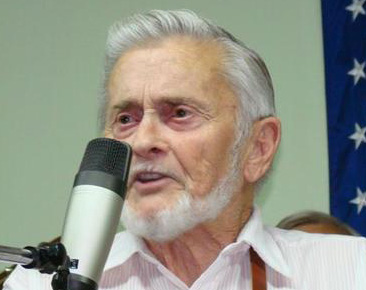 Roy McMillan passed away on July 5, 2014, at his home in Lewisville, North Carolina, after experiencing many years of serious ill health. He was 84 years old.

Roy Berlin McMillan was born May 17, 1930, in Fancy Gap in Carroll County, Virginia.

When he was 8-years old, Roy McMillan heard the music of Bill Monroe while sitting around a battery-powered radio growing up in the Blue Ridge Mountains. “We listened to the Grand Ole Opry on Saturday night and when Bill came on singing Mule Skinner Blues in that high tenor voice and took his mandolin break, I came out of my seat! From then on, I couldn’t get enough of that music.” McMillan immediately started learning to play the mandolin. He appreciated all of the bluegrass artists down through the years but Bill Monroe was always his hero. Other than being able to chord the guitar, the mandolin was always his instrument, love and passion.

McMillan moved to the Winston-Salem, North Carolina, area in 1950 and began his life there as a restaurant cook. He later changed careers and started his own paint and body shop business where he was known far and wide for his great work, but there never was a time bluegrass music wasn’t a big part of McMillan’s life–body repairman by day, musician by night. Being a bluegrass entertainer was his dream.

The first band McMillan played with was Larry Richardson and the Blue Ridge Boys of Pfafftown, North Carolina, in the early 1960s.

Ray Edwards, banjo player with McMillan’s own group The High Country Boys, says of McMillan’s formative years: “Larry had previously worked with Bill Monroe and the Blue Grass Boys and was a top-notch banjo player and tenor singer. I’m sure working with Larry was a great training ground for Roy and a place he gained a lot of experience being a musician, singer and band leader.”
When Richardson left the group, McMillan worked the following few years with The Wandering Valley Boys.

In 1968, McMillan joined the Blue Ridge Partners playing mandolin and singing lead. It was here that his visibility and reputation in bluegrass music grew by leaps and bounds. Fans at festivals and shows were not only realizing what a great mandolin player, singer and front man McMillan was, but also witnessed one of the most prolific songwriters in bluegrass music emerging.

McMillan was coming into his own as a bluegrass songwriter and was writing a lot of the material performed by the Blue Ridge Partners, songs such as “Mountain Folks” (later recorded by Ralph Stanley), “Up In The High Country” (later recorded by Big Country Bluegrass, who made it the title of their CD as well, in 2000, and Ray Edwards in 2005), “Saturday Night at the Hoedown,” and McMillan’s first instrumental, “Firefly.” These songs were included on the first LP the Blue Ridge Partners did for the German-based record label GHP (LP 901) in 1969 titled appropriately, Mountain Folks. The LP was a success regionally as well as in Germany. Among Roy’s many talents, song-writing was rapidly taking centre stage.

In 1970, McMillan left the Partners to form The High Country Boys.

Edwards takes up the story …

“Roy ‘s singing, playing, song-writing and emcee talents were all in their prime and it was his time for him to step out on his own.

Being excited about leading his own group would be an understatement. It was a wonderful time in Roy’s life.

He hired Grady Bullins from Lawsonville North Carolina, to play guitar and sing baritone and Audine Lineberry from Galax Virginia, to play bass and sing tenor. All he needed was a banjo player to complete his basic four-piece bluegrass band and go to work. He was undecided on a banjo player when he received a call from Wayne Hauser (who was the banjo player with the Partner’s during Roy’s stint with the group) recommending a kid he was giving banjo lessons to from Arcadia, North Carolina, by the name of Ray Edwards. He told Roy, ‘He’s green but he’s going to make a dandy.’

I got a call from Roy shortly thereafter asking me to come and audition for the opening. I was excited but intimidated. I had just seen Roy perform with the Partners at the Lake Norman Music Hall in Terrell, North Carolina, a few months prior and felt I had never heard a man sing with such soul. Nervous and intimidated, Kay banjo in tow, I auditioned for Roy’s prized group and miraculously got the job. To this day, I don’t know why Roy picked me but I’m glad he did. Thanks to his patience and sharing his knowledge and experience, I’m the musician I am today.”

The High Country Boys enjoyed playing on the festival and convention circuits.

In the spring of 1970 they added the great fiddler, Carl Joyner (now deceased) of Forbush, North Carolina, to the band and in the mid-1970s McMillan hired solid bass player, outstanding tenor and high baritone singer, Darrell Rowland of Chilhowee, Virginia. By the end of the year, McMillan would also add his only son Doug to the group, playing second rhythm guitar and sharing the tenor and high baritone duties.

Dick Freeland, original owner of Rebel Records, was in attendance at Carlton Haney’s Camp Springs, North Carolina, festival in 1971 and was very impressed with High Country Boys sound and their professionalism.

Ray again: “Truth be known, Roy’s song-writing prowess and the band performing all original material was the key to Dick offering Roy a record deal with Rebel Records. Roy signed on and we were all were very proud to be part of the Rebel Records family.

We traveled to Clinton, Maryland, early in 1972 and recorded our first album for Rebel titled, High Country. It was a great experience recording with Roy and the guys and the album received rave reviews. That album included a lot of Roy’s classics, County Chain Gang, Cold Wind, Mandy Jane and Wandering in the Darkness.”

Joe Val and the Circuit Riders both recorded fantastic versions of Cold Wind.

Edwards explains: “’Wandering in the Darkness’ turned out to be one of the most commercial songs Roy ever wrote, but caused him the most heartache. On March 19, 1996, the Lonesome River Band released their heralded CD, One Step Forward. Roy’s “Wandering in the Darkness” was not only included on Lonesome River Band’s new CD but it was the lead cut.

It was nominated for IBMA’s Song of the Year award and to this day can be heard by bands performing it all over the world.

Unfortunately, the song was listed on the CD as When You Go Walking, written by two entirely different writers. No mention of Roy McMillan whatsoever.

When you attend an IBMA Award Show and your song has been nominated for Song of the Year, it’s very exciting. When the song is announced by a different name and written by two entirely different songwriters, it can break a songwriter’s spirit to say the least.

When you put your heart and soul in a song and not get credit for it, it’s devastating. It’s a disappointment you never get over. Roy McMillan and Dick Freeland worked tirelessly for years to resolve this injustice with limited success. They met with the IBMA immediately after the awards show and after reviewing their proof of claim to the song, they realized immediately the credits were incorrect and on their radio broadcast later that night announcing all the winners, Roy McMillan was announced as the sole writer of the song. I truly believe Roy’s life was cut short by this grave ‘mistake,’ if you will. A songwriter lives to hear his songs recorded and performed, sometimes more so than receiving a check.”

The Lonesome River Band had no idea of the controversy surrounding the song-writing and publishing credits of the song when they recorded it. All they were guilty of is making a killer record of a song that was pitched to them.

It is doubtful that Zap Publishing and Roy McMillan were ever correctly compensated for all of the song’s sales and performances.