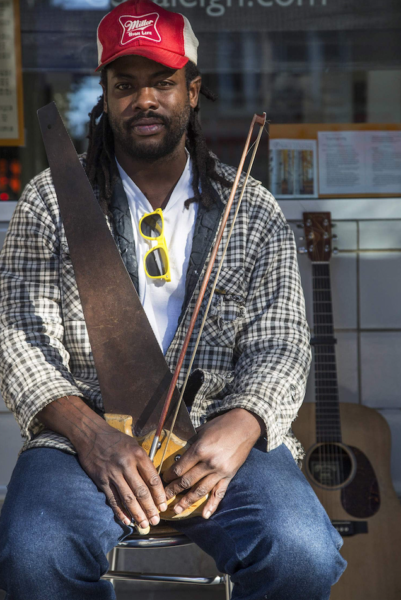 When Dwight performs at RAF for the first time, he’ll become the third sawyer we’ve hosted!

Mimi Montgomery’s profile of Dwight below was originally published in Walter magazine, which is published in Raleigh, along with this fine photograph by Travis Long.

If you’re lucky, you’ll come across Dwight Hawkins, 34, playing his guitar, saw, or cow bones downtown at the intersection of Hargett and Fayetteville streets. If you’re really lucky, he’ll pull a beer out of his backpack, offer you a cigarette, and invite you to sit down and talk music: Hawkins knows pretty much everything about what he calls pre-war string band music as well as hillbilly, hokum, and jug music. He’s seen pretty much everything, too.

He jumped on his first freight train at 18. A kid with wanderlust, he wanted to chase adventure, and left behind his home in Raleigh for the life of what he calls “a hobo.” Pretty soon, he was an expert on jumping trains. He knew which direction each one traveled and how to get from one city to the next without spending a dime. Since then, he’s made eight loops around the country. “It’s like a science eventually,” Hawkins says. “I used to ride the train like it was a bus … it’s free and you can drink whiskey and smoke cigarettes.”

It was riding trains that made him leave punk rock behind to embrace the early-20th-century blues he loves today. It’s a musical style rooted in the Depression era, and closely associated with freight trains and the “hobo” lifestyle. Hawkins has traveled the country playing this music, performing in streets with pickup bands, and even playing shows with the likes of the Carolina Chocolate Drops and the Hackensaw Boys at events like MerleFest and FloydFest.

Of course, it’s not an easy way of life. Hawkins has had his money, possessions, and instruments stolen or destroyed; friends have died on the road. Consequently, many of his buddies have settled down as they’ve gotten older, Hawkins included. He now makes Raleigh his permanent home again with his daughter, Mildred Belle, 3, and works in construction, playing his music as often as possible.

On the side, he’s started Musical Hardware, a program that teaches schoolchildren about the accessibility of music. Hawkins wants kids to know they don’t have to read sheet music to understand it, and shows them how to do things like make instruments out of metal or buckets. He still yearns for travel from time to time, but for now, he knows he’s where he needs to be. “I used to be the road,” he says, “now I’m the lighthouse.”