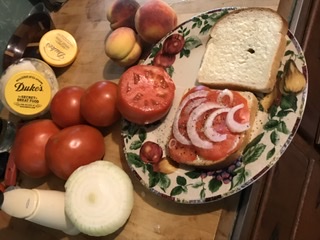 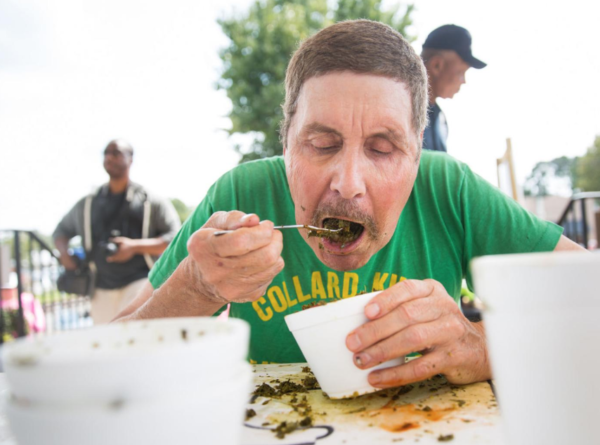 Rose didn’t last long in the eating competition, which was won by C. Mort Hurst, who set a new world’s record by eating 7.5 lbs. in 30 minutes. Hurst had the unusual practice of dousing his pints of collards with ketchup, and at one point he stopped eating while a runner got another bottle from Bum’s. One of the rules of the competition is that the winner had to keep their collards down until receiving their trophy and check. (The previous year, the apparent 2nd place eater was elevated to 1st when the first place winner projectiled straight out from the stage as he started across it to receive his prizes.) Hurst had begun to look ill before he accepted his prizes, a check and trophy. Rose was seated on steps off the back of the stage, with a plate of barbecue (also Bum’s-cooked) and tea, and I was talking to her when Hurst, leaving the stage, stepped beside her, turned (away from us, towards the back of the stage), and began vomiting. After a few quick and spectacular heaves, he burped, wiped his mouth, and walked off, trophy still in hand. Rose and I were speechless; she covered her food with a napkin and then said, “I think I’ll find another place to eat. The flies are going to get bad around here pretty soon.”

Price Walden has also composed a cantata based on the book. It includes a James Applewhite poem not published in The Collard Poems and premiered at the Southern Food Alliance’s 2011 symposium in Oxford, Mississippi. It’s also been performed by the Atlanta Symphony at the Atlanta Food & Wine Festival. Listen to it (and also read the libretto) on Walden’s webpage.