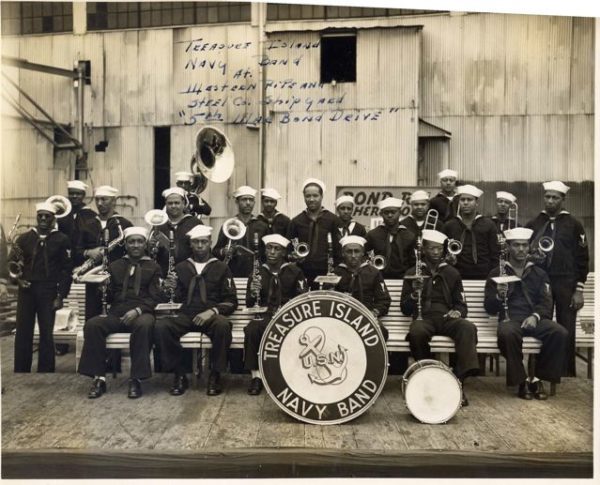 The Treasure Island Naval Station band was popular throughout the San Francisco area. The island on which they were stationed was built in 1936-37 in San Francisco Bay for the 1939 Golden Gate International Exhibition and was leased to the Navy in 1941. Clyde Kerr, who led the first New Orleans Lakefront Navy band, was transferred to Treasure Island in 1944 and served there until the war ended. The Treasure Island band, comprised of the only African Americans serving on the base, played for morning colors, and at bond rallies and ship launchings. The swing band, known as the Shipmates of Rhythm, provided music for the Naval Station’s weekly radio broadcast, “Skyway to Victory.” Kerr said that he worked with “just about all the best musicians in the country.” The Shipmates of Rhythm also played regularly at the Stage Door, a USO club that, after the war, became the Stage Door Theater.

Kerr managed to work double duty while stationed at Treasure Island, composing and arranging for stage and traveling shows that featured musicians such as Harry James, and his band also performed behind Humphrey Bogart, Betty Grable, and other Hollywood stars–Bette Davis was in charge of booking musical acts at the Stage Door.

Jackson, Fitzpatrick, Page, Walker, Melvin Saunders, Buchanan, and O’Neil are the only ones still listed with the band in April 1944. 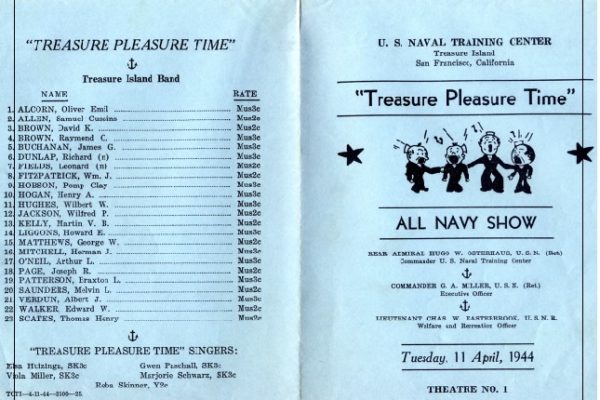 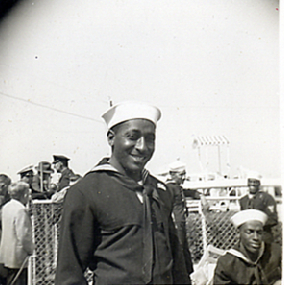 Oliver Alcorn (right), who died in 1981, played clarinet and tenor saxophone in the Treasure Island Navy band. He recorded with Papa Celestin and the Original Tuxedo Jazz Orchestra in New Orleans in the mid-1920s.