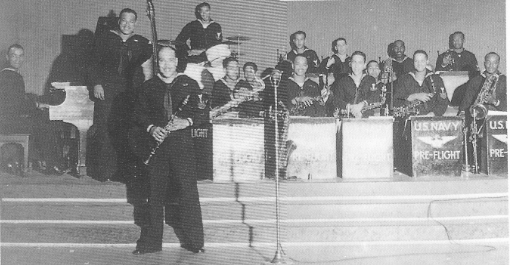 photo of Marshal Royal and his Navy dance band, from his memoir, Jazz Survivor

The Navy band assigned to the St. Mary’s College Preflight School at Moraga, California, was a 45-piece regimental band, with smaller groups and two dance bands formed from its ranks. According to Marshal Royal, one of the most noted jazzmen to play in a Navy band, “We had the best musicians there were around in those days. This was because most younger musicians in the United States were draft age, including a lot of the finest musicians in the country.”

Marshal and his brother, Ernie, and one other musician were playing with Lionel Hampton’s band at the time of their enlistment. Out of the main band at St. Mary’s, several smaller groups were formed, as well as two dance bands designated Number 1 and Number 2. Marshal Royal was leader of the Number 1 band, which was also known as the Bombardiers, and got many of their arrangements from the Count Basie repertoire. Gerald Wilson, the principal arranger for the Great Lakes bands, also provided some charts. Marshal said his was “an excellent, professional sounding band” and that it was “very very successful, worth listening to, and well received. No regular commercial band of the time could stand the competition of coming near us when we were appearing.”

In fact, Royal believed that his band was kept close to St. Mary’s for fear that if their reputation got around too much, an admiral would request them for his own band and have them shipped to the South Pacific–a curious fear given that many in the B-1 band stationed at the University of North Carolina Preflight School believed that they were transferred to Hawaii at the request of Admiral Halsey. Marshal Royal recalled that his commander refused a request to perform in Hollywood for Bette Davis because of this fear.

A second dance band, the Topflighters, was led by alto sax player Buddy Collette, who had been playing with Les Hite’s band in 1941 before enlisting. His memoir records a trip that he, Bill Douglass, and Charlie Mingus made from Los Angeles to San Francisco in October 1942, after hearing that a Navy officer was recruiting musicians from the union there to serve in an all-black band that would be stationed at St. Mary’s. Both Mingus and Douglass changed their minds, however. Douglass was later drafted by the Army; Mingus got re-classified 4-F.

According to Collette, he formed the second dance band after he refused to join Marshal Royal’s band on baritone sax, and along with most of the remaining fellows in the marching band realized that the dance band service was much easier than general musicians duty. Also in his band were Orlando Stallings on saxophone; James Ellison, Myers Franchot Alexander and Henry Godfrey on trumpet; George Lewis on first trombone; Ralph Thomas on bass tuba; and a few fellows he recalls only by nickname: “the Indian” on bass; “the Spider” and “the Crow” on tenor saxophones.

Both dance bands played gigs at the Stage Door Canteen, the USO in San Francisco that featured 24-hour service and entertainment, as featured acts and as back-ups to the stars that were performing there, usually unannounced, when they were in the San Francisco area.

Willie Humphrey, a New Orleans Dixieland jazz legend, joined the marching band late. Collette recalls that Marshal Royal didn’t realize who he was and wasn’t that interested in Dixieland, so Collette was able to get him into the Topflighters and subsequently arranged songs to highlight Humphrey’s talent. It seems likely that Humphrey would have been transferred to St. Mary’s at the same time as Clyde Kerr was transferred to Treasure Island, when the New Orleans Lakefront band was broken up and dispersed.

Collette and others from St. Mary’s also played at clubs around San Francisco, especially in Oakland and at Redwood City, south of San Francisco, while in the Navy. “When you’re in uniform, you’re not supposed to be working outside,” he writes, “so we would get in civilian clothes–it was such a good job.”

Unlike U.S. Navy B-1, who was promised service at UNC for the war’s duration but wound up in Hawaii, the St. Mary’s College band was never transferred.

According to Marshal Royal, St. Mary’s, located about 26 miles from San Francisco, in Moraga, was also different from the UNC campus in that bandsmen were given quarters on campus and also fed there, eating the same high quality food as the cadets. But Collette recalls that he was told that he had to find his own housing. Regardless, Marshal Royal and many others, already professional musicians and with families of their own, lived off campus. Marshal Royal had an apartment in San Francisco, with his wife and dog, Mike, and was pleased with his arrangements, especially the extra money he was allocated travel expenses, room and board, and books of food stamps supplied by the Navy, which also allowed the bandsmen to purchase gas on base for only a few pennies a gallon.

According to Royal, the whole band played for the 8 a.m. daily flag raising and then went to their barracks for a coffee break before rehearsing for three hours. They then played for the cadets to march in formation at noon for thirty minutes as they went to lunch, and afterwards, they had their own lunch before rehearsing some more, until their day ended at 4 p.m.

The bands also played for bond rallies, regimental reviews, at football games, and in concerts for the cadets and the community. The swing bands played for smokers and dances at USOs and officers clubs.

Although the bandsmen were excellent musicians, Royal said they were terrible at marching: “When it came to marching, it was a farce! We were ridiculous. We looked like forty-five comedians out there trying to mach in formation.” He recalled one trombone player who marched with a fifth of liquor in his sock.

Marshal Royal enlisted in the Navy in October 1942, with his brother, Ernie, and a few others who, like them, had been living in Los Angeles: Jackie Kelson, who became known as Kelso; Buddy Collette, and Andy Anderson, “a good tenor sax player.” Most of the enlistees were from the San Francisco area, where the enlistment office was located: Vernon Alley, from the Lionel Hampton band; Jerome Richardson, “a good reed man” who was but 19-years-old; Wilbert Baranco, “a first rate pianist and arranger who also did vocals”; a “young Earl Watkins, an excellent drummer” who would play with Fatha Hines for most of the 1950s; Curtis Lowe; and Quedellus Martin.

The Bombardiers included Alley on bass, who would become “the most distinguished jazz musician in San Francisco history,” according to Jazz Forum; C.E. Anderson on saxophone and clarinet; Watkins on drums; Baranco on piano; H. Grimes on trumpet; Kelson on saxophone and clarinet; Ernie Royal on trumpet; and Marshal Royal on clarinet. Marshal Royal names Buddy Collette as being in this band but Collette adamantly refutes that and writes that despite how much he liked Royal, he wouldn’t play with him in a band because of how Royal preferred to take the best solos himself.

Kelson (as Kelso) played alto sax on several Lou Rawls recordings. Marshal Royal played alto sax with the Les Hite orchestra for eight years prior to the war and in the Count Basie orchestra for twenty years after it. Collette made several recordings under his own name and was a leading jazz performer, arranger, and soundtrack musician in Los Angeles for many years after the war. The 1946 recording “Groovin’ High in L.A.” featured an impressive roster of former Navy bandsmen in the Wilbert Baranco Orchestra, including Collette, Jack Kelson, Baranco, Earl Watkins and the near-Navy bassist Charles Mingus. Mingus’s 1962 Blue Note recording, “The Complete Town Hall Concert,” also includes several ex-Navy men: Ernie Royal, Clark Terry, Buddy Collette, and Jerome Richardson