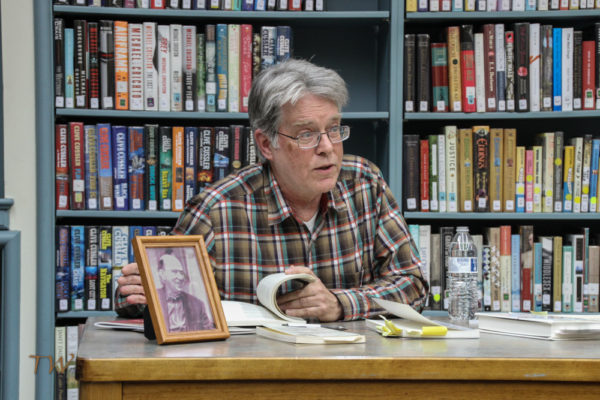 Before it was suspended early in 2020, I was a part of the North Carolina Humanities Council’s Roads Scholar program, speaking to nonprofit group audiences throughout North Carolina on B-1 and the integration of the modern Navy and also on the farm poets of eastern North Carolina.
I’ve talked to public audiences about a lot of other subjects, including Emma Dupree, the renowned Pitt County herbalist; the need for and a way to get a regional public transportation system; Kerouac’s Carolina connections; and histories of Fountain and its businesses.

“Beyond TOBY Time and Shuffle Along: Where the Other Black Entertainers Were.” Popular Culture Assn. Toronto, Ontario, Canada: 9 March 1990.

Talking about A.R. Ammons at the Farmville Public Library. Photo by Tom Whelan